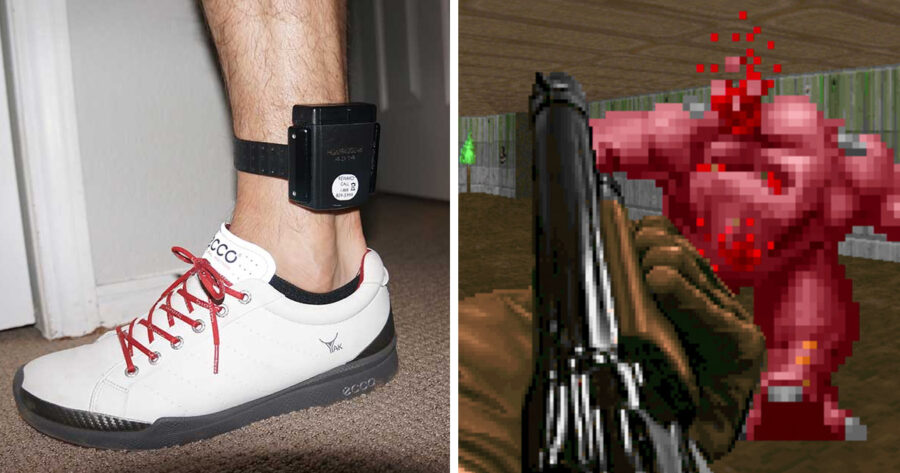 “It’s really boring being home all the time, and a little hacking project like this was a nice throwback to the work I had to do for the embezzlement scheme that landed me here in the first place,” said Koster. “I was even able to get the game’s heavy metal soundtrack to play through the little speaker that’s meant to alert local law enforcement officers if I violate my house arrest sentence. Next I might try to use the GPS tracking system to literally let me walk through the levels inside of my house, like Pokémon GO, but with demons.”

Kosters’ younger brother, Simon, who has been acting as caretaker for his brother, says seeing the classic game playing on the ankle monitor’s small screen has been a nostalgic treat during a difficult situation.

“I admit it’s a fun throwback and it reminds me of us playing DOOM together back in the day. It honestly kind of makes the whole crime thing worth it for me a little bit, to be honest,” said Simon while unloading a bag of groceries into his brother’s refrigerator as part of his twice-weekly visits. “I keep asking him to pull his leg over to me so that I can have a turn playing the game, but he said I have to get my own house arrest tracker if I want to play. It’s not fair. It’s like when we were little all over again.”

Law enforcement officers assigned to supervise Kosters’s case are not pleased with his hobby project.

“If you really want to make your own modded version of DOOM, don’t mess with government property when you do it,” said Officer Sharon Kaminski. “You can just assume that anything with a screen, a few buttons, and an on/off switch can run DOOM. There’s no need to break open your ankle monitor just to prove something that was already obvious in the first place.”

At press time, Kosters was being further investigated by authorities for distributing his ankle monitor hack on The Pirate Bay.