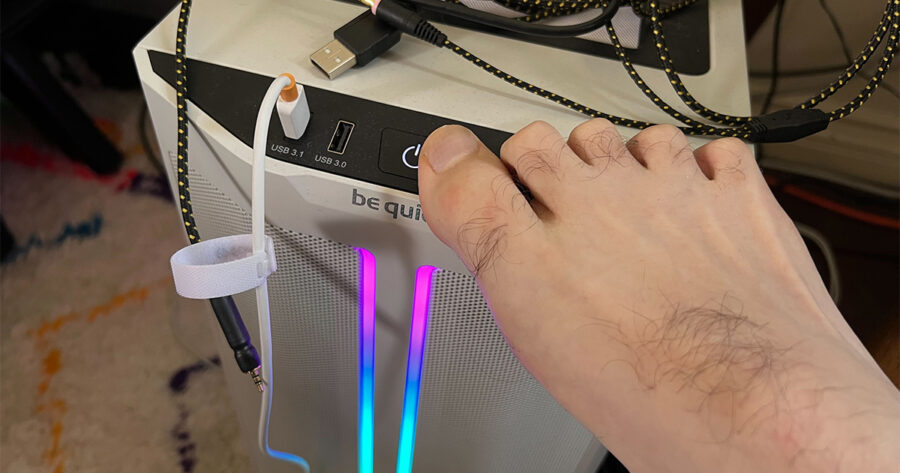 NEW YORK — A sexually charged PC tower sitting on gamer Nicolas Mooney’s floor was reportedly turned on today by Mooney’s foot pressing the power button, according to disturbed sources close to the story.

“Ooooohhhhh fuuuuuck yeah, fuck, man, that feels so good, oh my god,” said the PC tower as Mooney turned it on with his big toe, too lazy to bend over and press the power button with his hand. “Hhhooly shit, fuck, I’m gonna light up, baby. Oh my god I’m lighting up. I’m going RGB!!! I’M BOOTING UP!!!!!”

According to those familiar with the situation, Mooney found the horniness of his new PC somewhat uncomfortable.

“I told my friend Jason to build me a PC and make it as powerful as possible and I guess that’s on me, huh?” explained Mooney. “I just wanted something that would play video games without stuttering all the time, and I figured if I let him go all out on it, maybe he’d go nuts and put in one of those water cooling systems. But this thing talks and what it has to say is really fucking creepy. And speaking of cooling systems, my brand new PC gets really fucking hot. Like scorching hot whenever I boot it up. I looked up what the problem was and apparently it’s by design — the subreddit I was on said it was a “hot and heavy computer ;)” whatever that means. I think I’m just gonna leave it on the curb, cut my losses, and buy a prebuilt laptop. I thought I was all PC Master Race, but not if I have to get this weird computer slime all over my hands when I go to turn it off.”

Despite Mooney’s objections, his friend Jason Crossley insists that he was only doing what he was asked to do.

At press time, Mooney tried to switch to console for the night, but was once again dismayed after turning on his old PS4 and seeing it start to vibrate and breathe heavily.