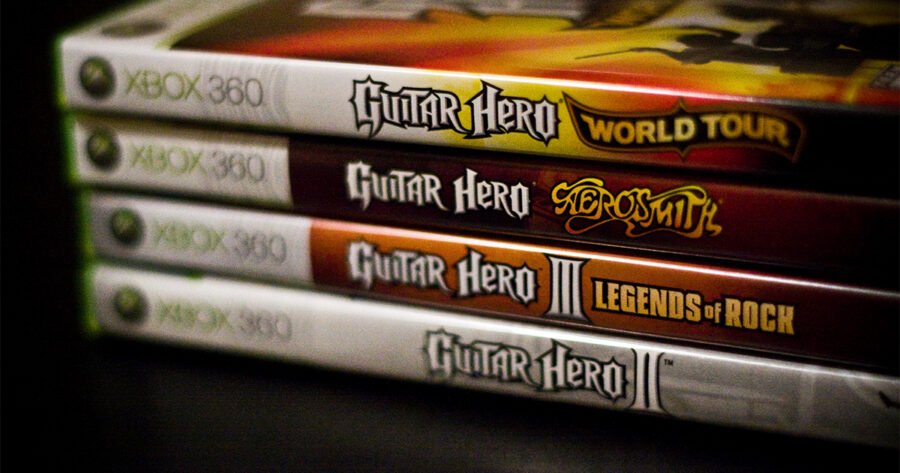 “When I was 17, my mom was watching me like a hawk,” Driscoll explained. “I knew Aerosmith’d be a safe spot to stash a joint, but the fact that no one has ever asked to play it with me is starting to feel a bit eerie. It’s been 13 whole years. Not only am I high as fuck, but I’m getting a bit too good at ‘Walk This Way’ on Expert.”

Driscoll’s ownership of the Xbox 360 title stemmed from a brief flirtation with the 1975 album Toys in the Attic in high school, which his friends called “further proof” how high he was.

“I used to light up with Stu when his parents were away,” acquaintance Daryl Finn recalled. “He’d give me this sly look and pull that shitty game out of his Kmart DVD rack, like he was a secret agent hiding microfilm in a bookcase full of Tolstoy. He’d stash everything in that case. I think he kept condoms clipped into those instruction manual holder tabs on the inside, so, y’know… they should still be in pristine condition.”

Upon request for comment, Activision reiterated their commitment to making games that “easily fade into any environment” to aid in secret storage, referring to Guitar Hero: Aerosmith as “a testament to our success in that area.”

“Our company is dedicated to the discreet needs of teenagers everywhere,” the press release boasted. “We took one of the hottest youth-oriented franchises of the era and released a version of it about geriatric glam-rockers whose last studio album four years prior was a blues tribute called Honkin’ on Bobo. You could install an aircraft landing light in that case and no-one would spend half a glance on it. That’s the Activision promise.”

Although Driscoll admitted that his uncle almost busted him “once or twice,” he was able to distract him successfully with a strategically placed Guitar Hero: Van Halen.