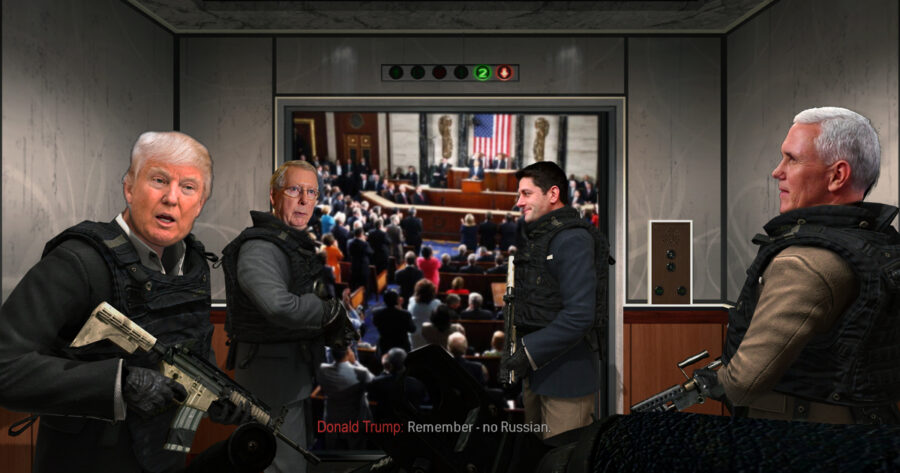 WASHINGTON — President Donald Trump grimly said to GOP lawmakers “Remember, no Russian,” moments before the elevator doors opened to the Senate floor for the vote on the American Healthcare Act, according to close sources.

The bill, which repeals and replaces Obamacare, will lead to around 20 million people losing healthcare across the United States according to the Congressional Budget Office.

Certain members of the GOP feel that, if they lay low, they are not necessarily complicit in the effects of the bill.

“This healthcare bill is gonna kill so many innocent people but it’s not like I’m really participating in it,” said Senator John McCain behind closed doors. “I’m just sort of walking next to the actual bad guys while they do all the bad stuff. A lot of it is horrifying but also it makes you think and it makes you feel things. That’s technically art, right?”

Despite Republican effort to pass ACHA, opponents of the bill have called it “brutal” and “disturbing”.

“The American Healthcare Act is essentially modern warfare,” said Senator Elizabeth Warren in an interview. “Honestly, they might as well be walking through a crowded airport shooting at random civilians instead of passing this law.”

According to the anonymous source, President Trump insisted that the party not use any Russian during the voting of the bill in order to mask their nationality and frame their enemies.

“Honestly, the whole Russia-America framing thing is a bit convoluted and unnecessary,” said the source who wished to remain anonymous. “We could have just dropped the whole thing and the main story of how everything is gonna play out wouldn’t necessarily have been changed much.”

John McCain, however, was found dead after the voting session.