Tragic: Guy on Message Board Could Have Saved Telltale 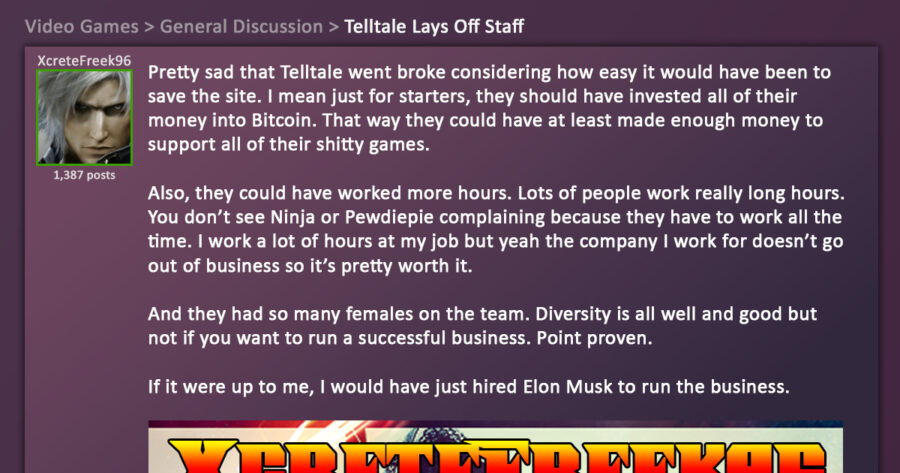 As you may know, only days ago, Telltale Games announced to unsuspecting employees that they would all be laid off from their jobs with no severance pay effective immediately. But now, NameGames forum user XcreteFreek96 just revealed that they could have “easily saved” the company from going under. If only he could have sent them his ideas in time!

“Pretty sad that Telltale went broke considering how easy it would have been to save the site,” said XcreteFreek96 in his 1,387th post to the video game message board, above a variety of flashing signature banners. “I mean just for starters, they should have invested all of their money into Bitcoin. That way they could have at least made enough money to support all of their shitty games.”

Ugh, why couldn’t they have posted sooner? Of course, XcreateFreek96’s sage advice may seem obvious in retrospect, but we have to remember that this is only because of how well they were able to lay out the information across their tragic forum post. If Telltale Games had thought of investing in Bitcoin at the time, they would have of course done so. Unfortunately, they did not and they paid the ultimate price.

This isn’t the end of XcreteFreek96’s message, though; the legendary forum poster went on to explain even more ways that Telltale could have prevented its tragic end.

“Also, they could have worked more hours. Lots of people work really long hours. You don’t see Ninja or Pewdiepie complaining because they have to work all the time. I work a lot of hours at my job but yeah the company I work for doesn’t go out of business so it’s pretty worth it,” the brilliant seer continued, mere hours too late to prevent the termination of Telltale. “And they had so many females on the team. Diversity is all well and good but not if you want to run a successful business. Point proven.”

It’s hard not to imagine a better world where XcreteFreek96 became CEO of Telltale Games and saved the company. The fact that the company disastrously fell apart only hours before XcreteFreek96 was able to post his ideas is nothing short of a Shakespearean tragedy. To make matters worse, XcreteFreek96 even ended their message with what they would have done if they were in control of Telltale, and if you love video games, it’s hard to read without feeling extreme disappointment.

“If it were up to me, I would have just hired Elon Musk to run the business,” the message boldly concludes.

Goddamn. That would have done it.

At the very least, hopefully some video game company in peril scoops up XcreteFreek96 to take the reigns and prevent their demise. The video game community needs someone with their strength and knowledge.

As of now, the forum post has zero replies, despite the two bots currently labeled as “online.” Godspeed.