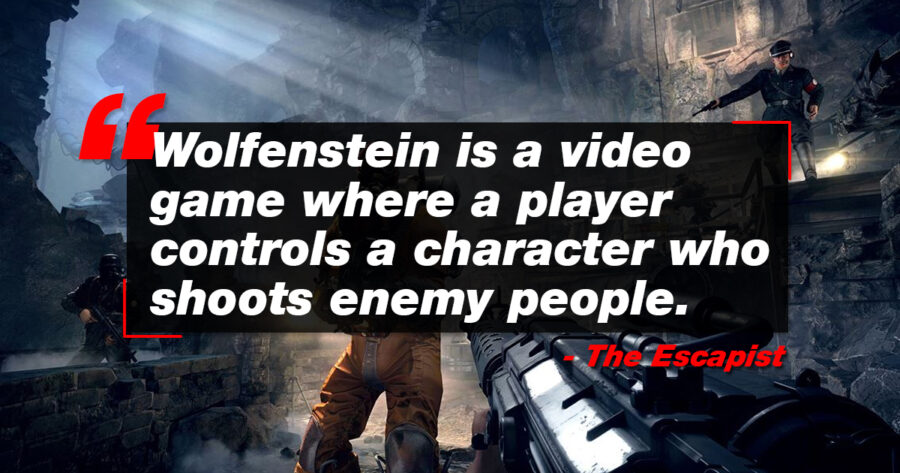 After unsuccessfully wading into political waters the past couple of years, the popular video game website The Escapist is relaunching with a new mission and owner. According to Editor-in-Chief Russ Pitts, the new site will be completely without political bias in an attempt to escape from the mistakes made by the former version of the website.

According to close sources, The Escapist plans to launch with reviews of games that they missed in their absence. The following is a leaked copy of their completely nonpolitical review of Wolfenstein II: The New Colossus.

The newest iteration of the popular franchise Wolfenstein is an absolute blast to play.

Wolfenstein II: The New Colossus follows the story of William “B.J.” Blazkowicz in his quest to shoot Nazis.

It’s always a blast to shoot Naz — oh no, wait shit. I’m not trying to invoke the a certain “Gate” or imply that anyone is a bad guy, or anything. Let me rephrase that.

Wolfenstein II: The New Colossus is a video game where a player controls a character who shoots enemy people.

OK cool, there we go. Sorry, this is gonna take a little while to get used to. Anyway, back to the review. The gunplay in Wolfenstein is a treasure to behold. The guns feel particularly accurate in the PC edition of the game, and I especially had a blast mowing down enemy NPCs with my Maschinenpistole, a heavy duty SMG that — oh wait, fuck. Guns are like the most political issue in the entire fucking country. OK hold up, I’m really sorry. I’m going to get this right so that literally no one reading this could ever be angry at The Escapist.

Wolfenstein II: The New Colossus is a video game where a player controls a character who interacts with enemies in a violent manner.

Now we’re cooking with gas. Er, that’s not a Nazi reference. Fuck wait, just forget what I was saying. Let me just start fresh with a nice, nonpolitical review of this game that I really loved.

Wolfenstein II: The New Colossus is a video game where a player controls a character who interacts with things.

I really enjoyed interacting with things in the newest iteration of Wolfenstein. It’s very fun to walk around maps and pick things up, then using those things you picked up to do other things, whether you’re interacting with characters in the game or just other objects. There are all sorts of cool cutscenes that advance the plot of Wolfenstein that I sure-as-fuck am not going to get into. I really enjoy seeing images on the screen flash in such a way that they trick my eyes into thinking there is motion, be they images I have control over or ones I just watch in awe.

Sure, by now it’s no longer a new release, but I really think you guys would — or girls — OR ANYONE, REALLY, REGARDLESS OF GENDER IDENTITY — unless you are one of those people who think there are only two genders, then just read the first part (and then other people, don’t read that part). NO ONE WILL BE ALIENATED.

Wolfenstein II: The New Colossus is a video game.

Wolfenstein II: The New Colossus is a game.

It’s pretty good and you should check it out. Unless you disagree, in which case, it’s trash. Thank you for reading The Escapist.