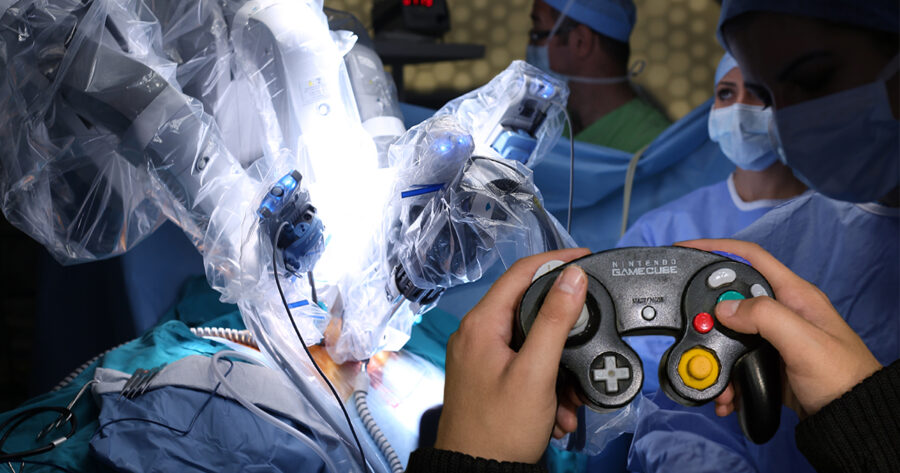 BOSTON — Explaining that newer controllers don’t quite provide the same comfort or familiarity, surgeon Dr. Frank Powell said this morning that he refuses to operate the $2 million surgery robot at Massachusetts General Hospital with anything but a GameCube controller.

“Sure, there are plenty of more modern options available, but the GameCube controller is the only one I can consistently pull off all the robot’s techniques and exploits with,” said Dr. Powell, citing that his ability to do things “like wavedash up a patient’s colon while performing a colonoscopy” or “L-cancel after making an incision during a gallbladder removal” as being nearly impossible on anything other than the vintage Nintendo controller.

“If amateur surgeons want to treat this robot like a toy, that’s on them, but I didn’t go to medical school for four years to use inferior equipment — which is why I use this controller that came out in 2001 and costs ten bucks,” Powell explained to his medical team. “We need to use three different adapters just to plug my GameCube controller into the surgery robot, but it’s totally worth it, especially because it’s a MultiShine.”

According to those who work with Powell, his controller choice can be explained by his past.

“Yeah, basically all Frank did in medical school was study for exams and play Melee tournaments with his roommates. Dude was even a Dr. Mario main,” explained Dr. Renee White, another surgeon at Massachusetts General Hospital. “I’ve tried to explain to him hundreds of times that the GameCube controller isn’t the most efficient way to perform surgery on a human being, but he’s too stubborn to realize that the Wii U Pro Controller is honestly really solid.”

At press time, Powell explained that, although the hospital had approved all of his budget requests for his controller so far, that they had drawn the line at replacing the 4K monitor for the robot’s stereoscopic camera with a CRT television.