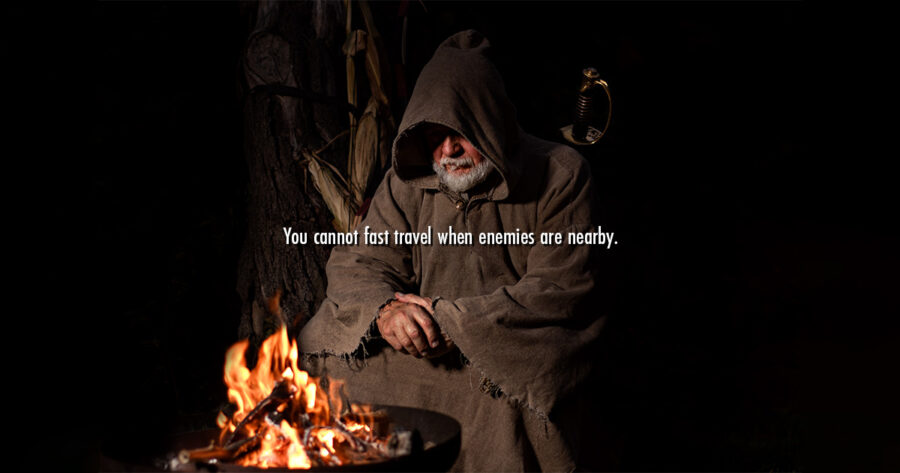 THE WASTELAND — Local rogue protagonist and dystopian wasteland resident Gunner Mayhew reportedly had an epiphany Friday when he was unable to fast travel due to an enemy nearby — his own psyche.

“I was trying to teleport to my next mission point, but I couldn’t due to a supposed enemy nearby,” Mayhew said. “I looked around and there wasn’t anyone there but me, when suddenly it hit me. I’m my own worst enemy. I sabotage my own happiness and career far more than any giant mutant spiders or deranged raiders ever could. I came to terms with the fact that it’s not about gaining levels and acquiring better gear, it’s about looking in the mirror and liking what stares back at me. I’m like a goddamn pop punk song but real.”

Mayhew’s frequent sidekick and leader of the wasteland resistance group The Hazmat Squad Brian Peyton said he was proud of Mayhew’s character growth.

“Before he was far too overencumbered to fast travel, not by weapons or trinkets, but by emotional baggage,” Peyton said. “It’s tough being the chosen one, the lone wanderer to save our world, and I could see it weighing on him. He would constantly ask me if he really was the one the prophecy foretold, and often lament how he doesn’t deserve it. I’m proud he finally decided to take some time and do some mental xp grinding for a while.

Local wasteland warlord and mortal enemy of Mayhew, Boss Johnson, said that he had seen this realization coming for years.

“Mayhew may thwart my evil plans at every turn, but even I could tell that he didn’t actually hate me and my nuclear arsenal, he hated himself,” Johnson said. “He was clearly doing all these lengthy missions and tedious side quests as a distraction, something to keep him busy so he doesn’t just have to be alone, truly alone, with himself. He’s constantly practicing new skills and adding new members to his party, but I’m glad he finally figured out that he himself is enough.”

At press time, sources close to Mayhew reported that the maverick wasteland survivor’s self-love had just unlocked a new ‘affirmations’ portion of his skill tree.