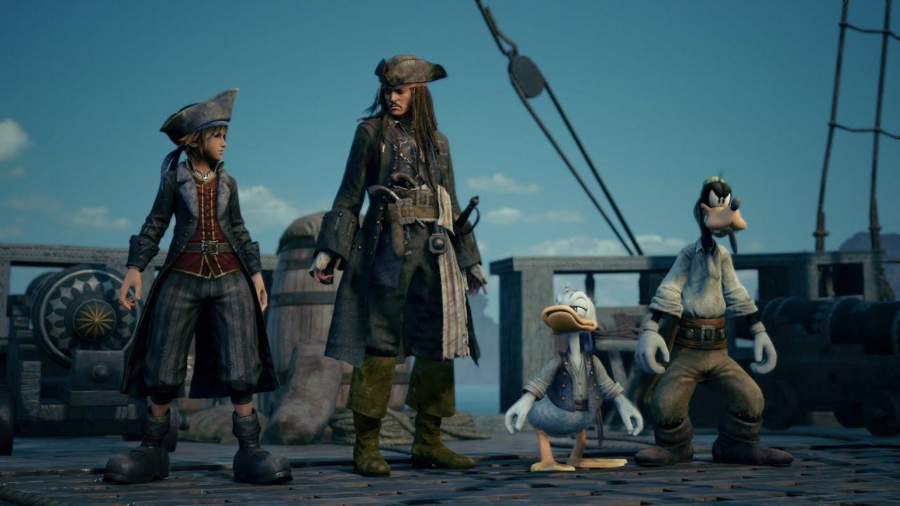 The motto of a Keyblade wielder is, of course, “May your heart be your guiding key.” And yet, for Sora, the protagonist of the Kingdom Heart franchise, it appears that his heart has guided him to a major Public Relations nightmare as he continues to work with Johnny Depp even after his recent domestic abuse issues.

Throughout the world of “The Caribbean,” Johnny Depp from Pirates of The Caribbean: At World’s End joins the party to fight alongside Sora, Donald and Goofy; with Sora choosing the power of friendship over the power of believing victims.

I made multiple attempts to remove Depp from my party, only to find out the game would not allow me. The game really makes you question whether Sora cared about fighting Heartless and Nobodies when he is now teamed with someone who has become both recently. His characterization, as a result, is spotty and inconsistent when standing beneath the looming shadow of a villain, and never once addressing it.

The game does try to justify Sora’s poor decision by pushing the narrative that there’s an even greater evil in Organization XIII, however this only backfires because they are the only characters capable of hitting Johnny Depp, therefore becoming the most relatable aspect of the entire game. Their goal to fill the world with darkness would also mean no one would ever have to look at Johnny Depp ever again, another check in the “good guy” column for this reviewer.

The gameplay is taken to new heights with each world having its own unique gameplay mechanic. However this once again feels like a missed opportunity as the game forces you to have a naval battle instead of battling with your conscience, where you spend hours sitting in a chair telling yourself it’s not that big a deal.

As cool as it was to bring in Summons from Disney movies like Lilo and Stitch and Wreck it Ralph, I wished they had allowed sora to summon Depp’s Ex wife Amber Heard, who instead of fighting, would explain to Sora and anyone around him how his actions have deeper impacts than just his own career.

Although interactions with Depp are limited to his one world, it becomes deeply troubling when none of the other characters express their thoughts on Depp’s actions. At no point after visiting the world do we see Goofy say, “Well Gee Sora, yur kinda chosin the wrong side’a history on this one h’yuck.” If Square Enix insists on casting Johnny Depp in their new game, they could at least make it part of the character development of their now ruined hero.

Even having Remy the Rat (from Ratatouille) pull on Sora’s hair to make him type out a bullshit notes-app apology for his Twitter would have been better.

In the end, what was supposed to be the conclusion to an incredible story is undercut by a desire to put a fight against light and dark over being a decent human being (or dog or mouse or whatever).

We give this game  4 morally questionable lights out of 13 relatable darknesses.