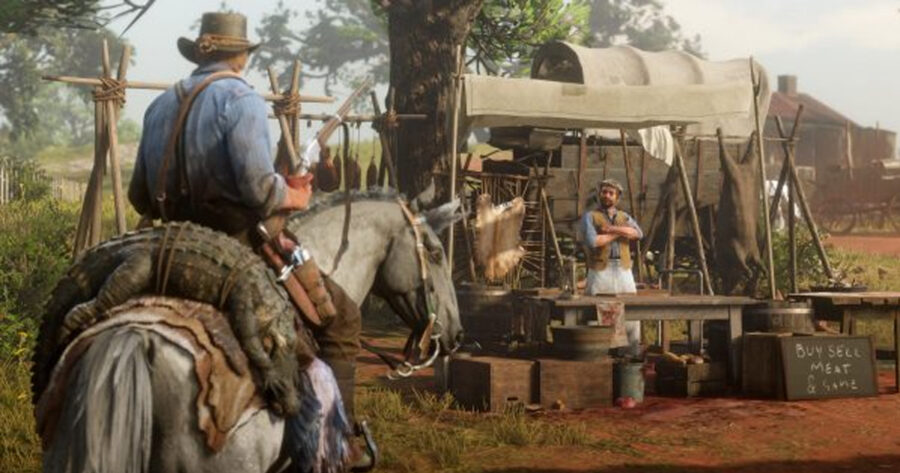 HORSESHOE OVERLOOK —  A local camp of the infamous Van Der Linde Gang is reportedly running dangerously low on medicine, which could prove deadly in the coming winter months. The camp is, however, currently overflowing with dead animal carcasses hunted by Arthur Morgan, a man the camp relies on for many tasks, but who has become preoccupied with hunting ever since the camp was established.

“I really don’t know what Morgan’s deal is, we ask him every time he leaves camp to come back with some medicine,” said Dutch Van Der Linde, the gang’s leader, “but every time he rides in, there’s another whitetail deer on his horse and a bunch of rabbit pelts slung over his shoulder.  We’ve all got whooping cough for Christ’s sake, we don’t need another goddamn pot of stew!”

Others in the camp have also criticized Morgan’s constant hunting, including Simon Pearson, the camp’s butcher and cook, who has been working around the clock to keep up with the non-stop flow of animal carcasses.

“I haven’t slept in four days, I’ve still got this giant stack of bears to cut through before I can sit down for a minute,” Pearson said, between violent coughing fits. “I’ve begged Morgan to stop, he’s ruining my life, but he just slaps me on the back super hard and it hurts like hell.  With any luck, I’ll be dead soon and won’t have to deal with his bullshit anymore.”

Camp morale is at an all time low, and Dutch Van Der Linde is getting more and more desperate to distract Morgan from his incessant need to hunt.

“I’ve tried setting up bank robberies and heists, getting revenge on the O’Driscolls, anything to get this guy to do some actual work,” said Dutch, seated next to a pile of dead geese. “I’ve got this whole story about loyalty, family and sacrifice worked out, I know he’s gonna be all over that shit once I convince him to stop shooting literally every animal he sees.  But mostly I just need some fucking cough medicine. God, we’re gonna die out here, aren’t we?”