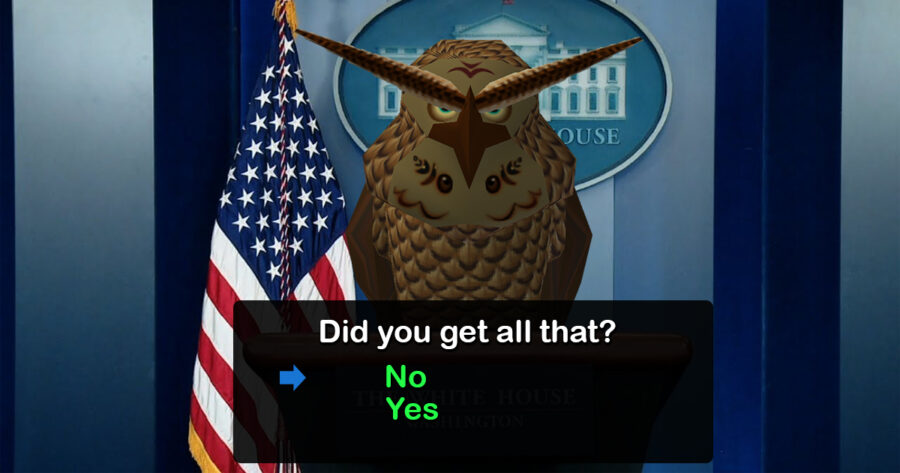 Gaebora reportedly answers all criticisms of Trump with meandering speeches to change the subject, ending each with the phrase “Did you get all that?” in attempt to fool reporters into hearing the whole thing again.

“This is clearly an attempt from the President to further stifle unwanted questions from the press,” said CNN anchor Jake Tapper on his show The Lead. “The talking owl from Ocarina of Time is perhaps the leading expert at wasting time with long, boring monologues and tricking listeners into agreeing to have the entire thing restated word for word at the end.”

Not only is Gaebora helping President Trump avoid questions during press conferences, but he is also reportedly blocking helping to delay the Mueller investigation by bogging down FBI agents with sudden conversations.

“I was on my way to work yesterday to investigate a new lead on Roger Stone when all of the sudden, I heard ‘Hoo hoot! Jerry, look up here!’” said FBI agent Jerry Sulsmich. “I wasted the next hour and a half just listening to this giant fucking owl perched above me and there was nothing I could do it about. He kept referring to the investigation as my ‘quest.’”

“I have so much goddamn work to do and I can’t stop talking to this fucking owl,” added Sulsmich before being picked up by the owl and flown away.

At press time, reporters were sent for a comment from Gaebora, but have reportedly been speaking to him for seven hours straight.