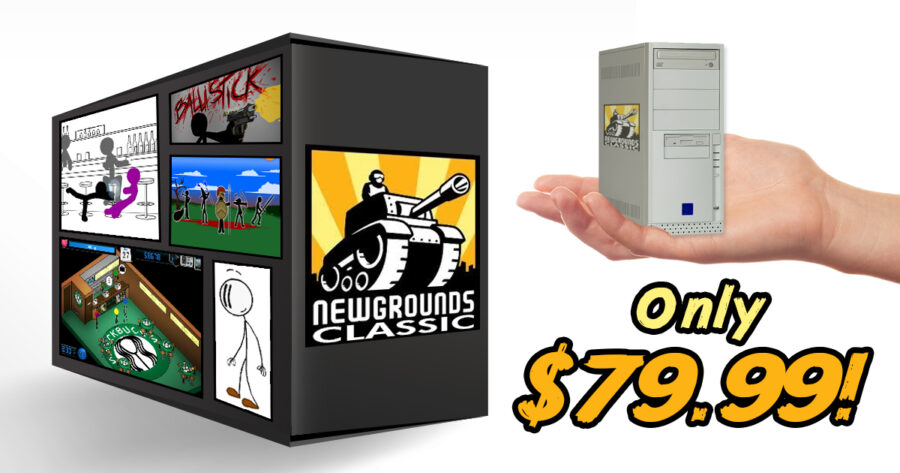 GLENSIDE, Penn. —  Gaming site Newgrounds has announced the Newgrounds Classic Mini, a console that features a collection of 40 of the website’s signature Flash-based stick figure fighting games made available on the site years ago.

“Finally, all of the games you love, and the Flash animations you’ve collectively blocked from your memories, can be yours again!” announced Tom Fulp, Newgrounds creator, on the homepage of the website earlier today. “We got Stick RPG, Stick Death, Stick Figure Homicide 4, and fuck it, we threw all of Rob DenBleyker’s stick-figure Star Wars parody videos, Stick Wars, in there too just for good measure.”

Designed to look like a mini Gateway PC from the early 2000s, the console aims at stoking the nostalgic desires of gamers who spent their teen years repeatedly killing baby seals and Britney Spears on the site as the new millenium dawned.

“This is exciting, as Newgrounds was a center of learning for me when I began developing Minecraft,” tweeted influential developer Markus “Notch” Persson. “It was Newgrounds that showed me that games can be repetitive and don’t have to look good in order to be fun.”

The website, created in the late 90s by Fulp, is a hub for user-created games and animations, which he hopes people will remember once the console comes out.

“I tell people at least once a day that yes, that site I made with all the stick figure games still exists,” Fulp explained. “But it’s not just stick figures, you know? If that’s not your style we have plenty of fake nude celebrity dress-up games as well!”

The console is expected to release in time for Christmas, and will reportedly be rated AO, due to excessive nudity, violence, drug use, and memes that were funny seven years ago.