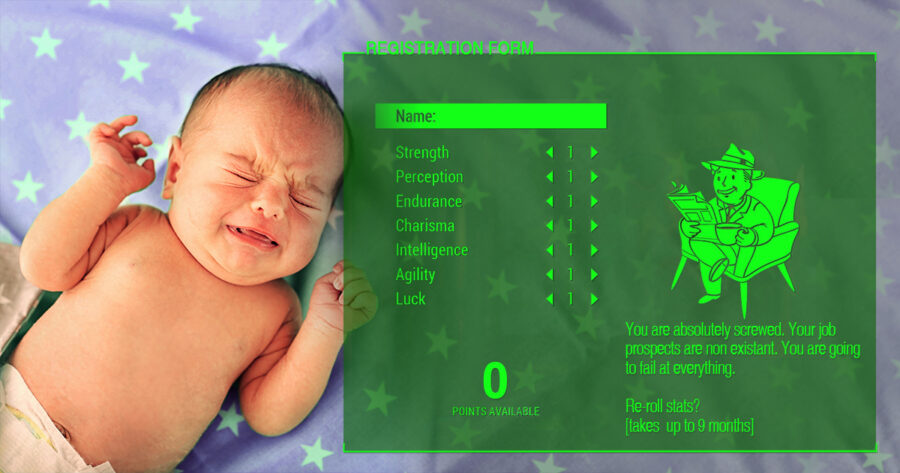 VALLEY STREAM, N.Y. — Fred and Maria Owens were severely disappointed to discover their newborn baby has absolutely terrible stats after being delivered in a local hospital today.

“I was so excited to meet my firstborn son until I saw that he has an agility of 1,” said Maria Owens while being consoled by her husband. “You want to bring a child into this world who can, you know, do some things. Not just sit around like a noob.”

Hospital staff says they have never seen anything like this before, citing “one in a million” odds to birth a child with such sub-par attributes.

“Usually when you roll a new baby, they have at least one or two decent abilities. You don’t end up with all duds,” said Doctor Anne Callow. “With years of training and experience, this baby could grow into a decent adult… but honestly, I’d probably just try to re-roll in nine months.”

Experts say that being born a baby with terrible stats has lasting effects not just in childhood, but all the way through affected people’s lives.

“Right off the bat, these children are cut off from a significant number of career paths,” said Columbia professor Steven Cassinger.  “Given his below-average intelligence, people literally will not understand what he is saying as an adult. And normally, that’s fine because it’s backed up by strength or charisma. But we’re looking at an idiotic, weak, boring, slow fuck.”

“In Spartan times, if you had a baby with such low stats… well… you’d ‘start a new save file’ so to speak,” he added.

At press time, Fred and Maria Owens were at home with their new sub-par baby, coming to terms with the fact that human stats are entirely genetic.