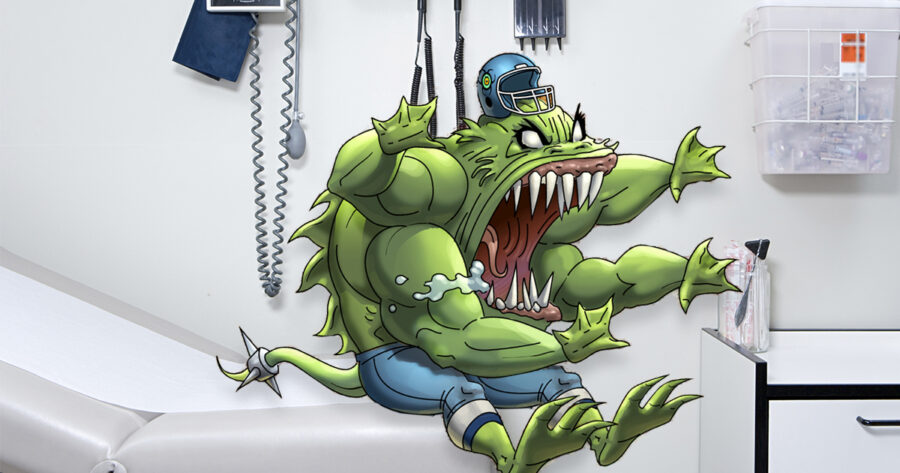 Kidd has insisted the allegations are unfounded, but the organization has still launched a full-scale investigation to determine the validity of these charges against one of Mutant League Football’s brightest and longest burning stars.

“Professional athletes are under a great deal of pressure on that field. As if having to play around fire pits and landmines wasn’t enough, we wanna make sure that we don’t disappoint the fans,” said a spokesperson for the Midway Monsters. “The losing team gets blown up at the end of the season. The MVP gets set on fire. So yeah, I can understand why sometimes being genetically engineered in a lab just isn’t enough of an edge out there on the field.”

K.T. Slayer, a retired safety who now works as a sportscaster for the MFL, offered his thoughts on the latest controversy.

“Kidd has committed some pretty heinous acts on the field this season. Just last week, Kidd crushed some poor cyborg linebacker’s skull with his bare hands, which is really hard unless you’re ‘roiding out,” said the retired troll. “Don’t get me wrong, in my day I would’ve body checked a tackler into a pitfall at the 20 when I’m running it in, but there’s rules, you know?”

The MLF Commissioner has promised a swift and thorough resolution in the pursuit of the truth.

“No one wants to see the integrity of the game tarnished with steroid use, but on any given Sunday, there’s a fucking radioactive skeleton playing tight end. So where do we draw the line?” said the commissioner in a formal statement to the press.

The MLF hopes to resolve this incident before playoffs, commenting, “We may have the occasional juicing scandal here and there, but we could do a damn sight worse. We do not employ sex offenders or domestic abusers. Just because we’re mutants doesn’t mean that we’re all monsters.”