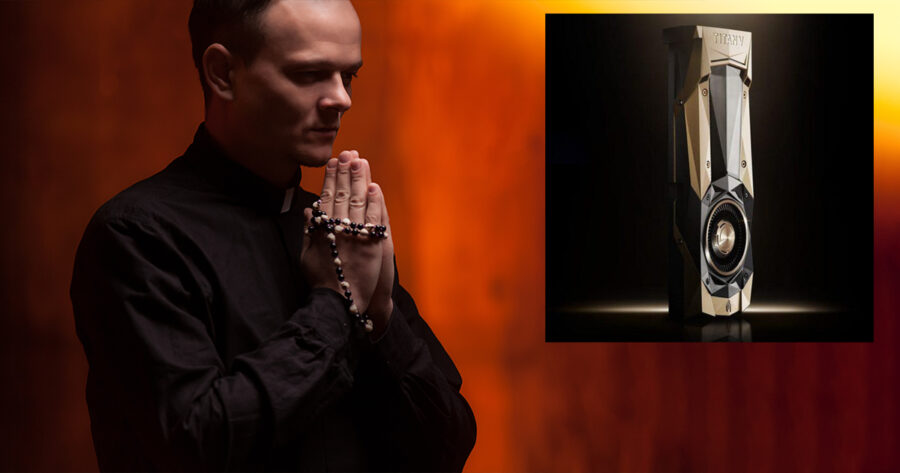 DAYTON, Ohio — A pastor at a megachurch told his congregation that God wants them to personally buy him a new $3,000 NVIDIA Titan V graphics card, sources have confirmed.

“The lord works in mysterious ways,” said Pastor Jacob Weaver, during his most recent sermon. “But there is nothing mysterious about inadequate performance when you’re trying to play PC games. That’s why I’m calling upon you, my brothers and sisters, to reach into your pocket books and give to the church this morning. I spoke to God, and this is exactly what he wants. He wanted me to tell you that it’s essentially a buck a person, so we should be able to do it no problem. He said it’s gotta be the Titan V, too. And as always, that cash is preferred.”

Attendees of the Greenhaven Community Christian Center were eager to support what they saw as a direct assignment from God.

“We are so blessed to be involved with a church that is so in tune with what God wants,” said churchgoer Helen Hutchens, shortly after putting $175 into one of the collection baskets. “Like, it if was me, I’d see about using these resources to feed and shelter the less fortunate among us, not use money donated with charitable intentions to live an excess lifestyle anchored by material possessions. But that’s why I’m not the pastor, ‘cause I don’t understand the word of God at all!”

“Good thing none of this is taxed,” she added. “Should help him get to his goal of affording that new graphics card sooner.”

Spokespeople from NVIDIA were sympathetic to the difficulty many consumers without loyal congregations have faced while trying to secure a Titan V.

“We do our best to make our graphics cards as affordable as we can,”said Jensen Huang, president and CEO of NVIDIA. “However, at this current moment, I’m afraid the fact remains that to most consumers, you really need nothing short of a miracle if you’re trying to come up with the money to buy one of these. Or I guess at the very least a direct communication with the lord. Say, did God tell that guy anything else, or just that he needs a sweet graphics card? I was just wondering.”

As of press time, Pastor Weaver also confirmed that God said he wasn’t mad about all that sex abuse stuff, either.