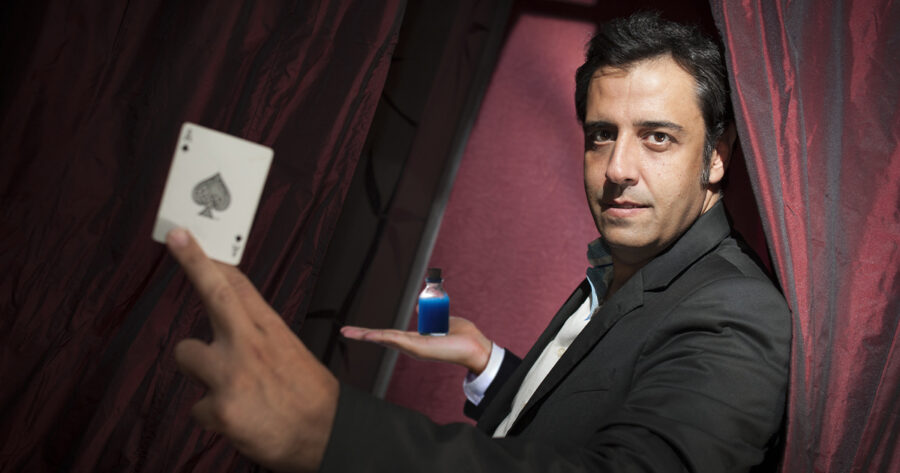 LAS VEGAS — Vegas magician Matteo the Magnificent was seen slurping down a potion to increase his mana points during a show last night so that he could accurately guess an audience member’s card, according to those familiar with the situation.

“These shows go on so long that I’m usually out of mana by the end of the first hour. Usually I have my sexy assistants walk around on stage for a bit so I can suck down some pots, but I guess some people noticed I had a glowing blue liquid on lips in the middle of a trick and everybody lost it,” Matteo the Magnificent explained. “I don’t know what people expected. How am I supposed to guess someone’s card if I’m out of mana?! What am I just supposed to know what someone’s card is without looking at it? There’s like 70 of them in a deck or something. No, it’s a spell. I cast a spell of insight and learn the card through that. Grow up!”

Attendees of the show were reportedly upset to see the magician drinking potions, according to those familiar with the situation.

“Simply put, I am shocked and horrified. I paid to see some wholesome magic fun — some sawing people in half and some sexual innuendo puns — and then this magician starts doing some sort of drugs in the middle of the show?!” said Dustin Mitchell, a concerned viewer. “He claims it just helps him with the magic, but if that’s true, it’s even worse! I’m sorry, but I don’t want my magicians using performance enhancing drugs during a show that I paid good money for. Sorry, but if you want to be a magician, you should perform your tricks the old fashioned way: I don’t know how they do their tricks.”

Despite complaints, the Association of Las Vegas Magicians have decided not to remove Matteo from their ranks.

“Look, we all gotta drink potions during the show. That’s part of the gig. You gotta do it in a way that’s more subtle of course, but mistakes are made. He just needs to make sure to use sleight of hand, next time — because that’s an incantation, so he can use it without needing mana,” said Stupendous Stephan, an official from the ALVM. “It’s not even just mana potions. Lotta times when we saw people in half or swallow swords, we need to drink a health potion or even an endurance potion. How the fuck do you think we swallow swords without that?! We would die.”

At press time, Matteo the Magnificent had tragically overdosed on mana potions, briefly becoming a magical sorceror god and terrorizing Las Vegas, before eventually succumbing to madness and passing away. He is survived by his several bunny rabbits.