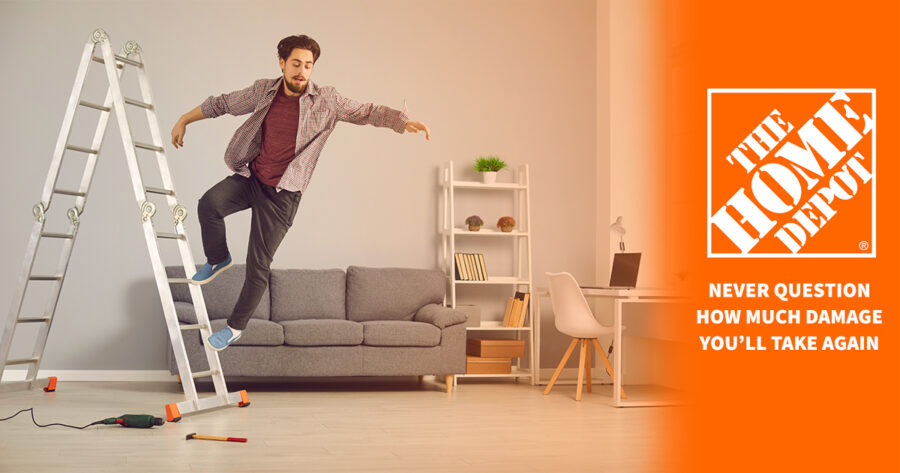 ‘We’re excited to unveil Ladder: Climbing Evolved, as the product is formally known, which features painted rungs of increasingly bright shades of red going up each escalating step to indicate how much damage an individual could sustain if they were to fall,” said Home Depot’s Chief Product Officer Marshall Prohaska. “While traditional Home Depot products tout safety and ease-of-use, the Ladder: Climbing Evolved differs by emphasizing the very real danger to your hit points which is inherently present during any day-to-day climbing scenario.”

The company’s leadership expressed enthusiasm for the promise of future product growth in the realm of gamer home goods and utilities.

“Gamers are a thrill-seeking breed, but they also require data to assist them in their ladder-climbing decision-making,” noted Home Depot CEO and President, Ted Decker, in a press release accompanying today’s announcement. “We at Home Depot believe that the innovations offered by Ladder: Climbing Evolved and its revolutionary fall damage indicators will usher in a new age of real-world Nathan Drakes and Lara Crofts, whether they are battling the existential threat of clogged gutters or simply placing the final crowning busty Tifa statuette atop their grotesque, towering anime figurine shrines.”

The ladder’s damage indicators are reportedly embellished with stick figure cartoons on each step similar to the quick-action illustrations in an action game’s UI, including a stick man with a gently bruised knee, a stick man with an exposed bone cursing in pain, and finally a cackling skull-and-crossbones face, in ascending order.

“I like that they finally made a ladder for gamers,” one user named DonkeyBongJr wrote in a comment on the press release video uploaded to the official Home Depot YouTube channel. “I do have to say, though, that the flashing RGB lights along the ladder’s struts are very distracting. Also, the built-in laser blast sound effects on each step sometimes freak me out. I can officially confirm that the damage indicators are accurate because I got a concussion just like the little stick man after falling off of the second run. Overall, I give it four stars!”

If Ladder: Climbing Evolved proves profitable, Decker says Home Depot plans on releasing other tools and equipment catering to gamers. “Our R&D team is hard at work on Splatoon-style paint pistols, giant circular saws that move along a track in deadly loops, and bricks that explode when you bash your head into them from below.”

At press time, Decker had reportedly teased investors with ambitious projections for 5-year revenue targets after revealing that Home Depot’s design team had successfully taught a pair of turtles to throw their signature line of hammers.