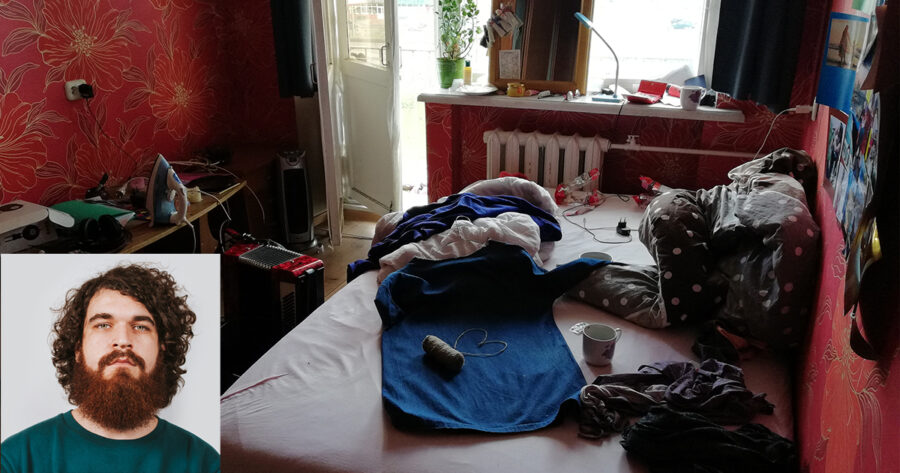 “It’s not my fault people don’t understand the concept,” said Patterson, sitting on a milk crate that he has, according to him, to show that he is too lazy to get a real chair. “I can’t clean up that newspaper clipping because it has a reference to a world event that will be helpful for anyone that comes across my body in an apocalypse scenario. And if I plan it just right, I’ll die with my finger pointing at the article in case they didn’t see it the first time.”

“Everything I do, I do for a reason. Whether it’s to explain our world to future post-apocalyptic travelers or to develop my character as a lazy slob, it’s all purely selfless. I don’t do it for me; in fact, I hate living like this,” Patterson explained. “It’s not just at home — outside, I’ll be sure to drop any trash I have on the ground to show people that come after me that the human race used to treat this planet like garbage and just toss crap wherever they went. It’s very sad, but it’s the only way I know.”

Patterson’s former partner Trevor Sawyer was the first to complain to him about his obsession.

“He’s so convinced that he needs to tell people in the future how bad things are, like we need another record of a person complaining about the present,” Sawyer said. “It’s all doom and gloom like he’s a day away from turning into a Pompeii statue-person or something. And boy did it ruin our relationship. Did you know that an empty toilet paper roll left on the holder environmentally tells the story of you living with a selfish douchebag?”

“And don’t even get me started on all the voice recordings he makes,” Sawyer added. “He’s not even a scientist!”