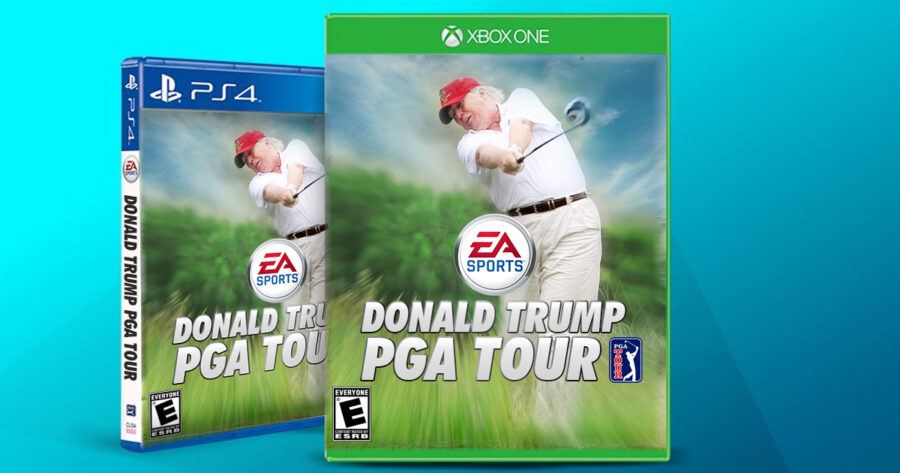 WASHINGTON — President Donald Trump announced that he will be the next cover star of EA Sports PGA Tour 2018 during an impromptu White House press conference today.

“This is a tremendous honor that I’ve bestowed upon myself,” said Trump to a crowded White House press room. “I’ve got the best clubs, I play on the best courses, I’m like, really great at golf.  Putting the Trump brand on this game is going to boost sales, bigly.”

Casey Patrick, a lead developer on PGA Tour 18, nervously echoed the president’s sentiments while flanked on each side by Secret Service members.

“After the Secret Service kicked our door in, slammed my head on a desk, and forced me to sign a contract that appeared to be written in crayon by President Trump himself, we were thrilled to put him on the cover,” Patrick told a group of reporters.

The game will feature several Trump related updates for fans of the President, including the Mar-A-Lago golf course on which President Trump has spent nearly a third of his first year in office.  EA Sports also plans to release a special edition controller that they assure fans is, “Definitely made for normal sized hands, like the ones the president has.”

Sanders, looking visibly relieved to talk about anything besides the Mueller investigation, the Russia dossier, DACA, and Michael Wolff’s Fire and Fury, gave a vociferous defense of the President.

“Nobody loves golf more than the president,” said Sanders, taking questions after Trump’s press conference. “This is a man who routinely puts golf before family, friends, and definitely before country.  His record speaks for itself, and there’s nobody better to represent golf to the world than a man who refuses to leave the golf course for weeks at a time.”

Donald Trump’s PGA Tour 18 will release later this year on Xbox One and any computer made in America.