Opinion: My Friend Pedro Is a Dangerous Game That Will Inspire Children to Backflip in Slow Motion While Perfectly Head-Shotting Six Guys in Succession 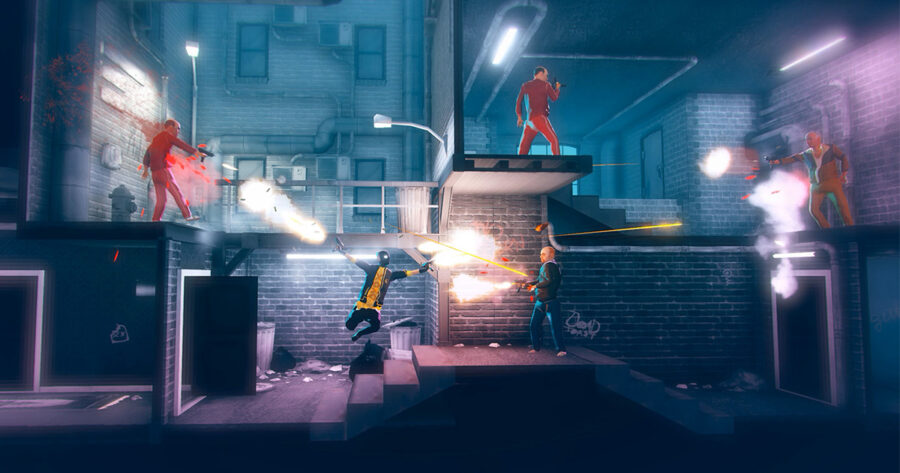 If there’s one thing we know about video games, it’s this: children are learning how to do violence by playing them. Throughout modern history, video games have acted as a sort of tutorial for children to figure out how to bring the most pain they can to the world. That is why it is our duty to inform parents and the government about extremely harmful video games that could train children to become deadly assassins. And today, I am here to warn you about the perhaps the most treacherous video game I have ever encountered, My Friend Pedro, which I gravely fear will inspire children around the world to learn how to backflip in slow motion and perfectly head-shot six guys in succession in their local neighborhood.

The scariest thing about discovering a game like this is that I discovered it when I noticed my 8-year-old son Dennis playing it on his computer. Every day I fear for the monster that Dennis may become from playing violent video games. Will he become like Master Chief, learning to use anything he sees as a weapon? Will he become like Doom Guy, seeing everyone in front of him as a demon, void of humanity? Or will he become like the protagonist of My Friend Pedro, slowing down time so that he can perfectly murder everyone around him with a precision that makes me shudder to my very core?

It is my job as a parent to take these games away from him, so as to hold the monster within him at bay, and of course, I have. I’ve also noticed that Dennis has taken to eating bananas — surprising, considering that he generally hates all fruits and vegetables — likely due to the titular talking banana in the game named Pedro. It scares me what he’s already taking from this horrid game, and it scares me to think where it could go next; fruit may be step one, but murder is only a step or two later. As a result, I have removed all fruits from our home, so as to make sure that my son takes no more influence from these violent “entertainment” systems. I urge fellow parents (and even adults who know people with children) to do the same to keep our streets safe.

But this is not enough. We need to urge our lawmakers to ban these video games everywhere they are available. If there is one thing — just ONE thing — we can do to fight gun violence, it is removing it at its source: HD remakes of popular side-scroller Flash games where you click a bunch of guys to kill them in slow motion. Because my son Dennis just asked me if he can start taking gymnastics classes and I absolutely refuse to let him learn how to perform a spin or a backflip. That’s my duty as a parent and that’s my duty as an American citizen. Dennis may seem sweet now, but trust me: there’s a killer lurking inside of him, as there is in all children. And slow motion blood particle effects are just waiting to bring those monsters out to kill us all.

Hey! Believe it or not, this article is sponsored by Devolver Digital. If you too want to learn how to do meticulously crafted slow-motion violence, check out My Friend Pedro on Steam! It’s only 5 bucks right now, baby.