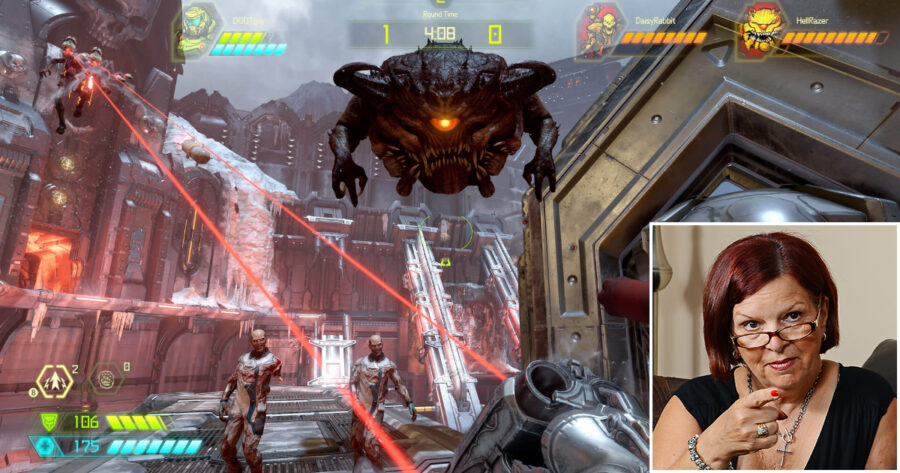 SHEBOYGAN, Wisc. — In an impromptu meeting reacting to the release of the latest game in the controversial Satanic-themed first-person shooter franchise, a coalition of concerned Christian mothers came to a unanimous agreement that it’s actually pretty neat how Doom Eternal’s combat system had been updated to discourage camping by the player.

“Our stance on this franchise has been constant since its inception in 1993. We believe that the Doom games are a morally bankrupt, depraved piece of pop culture that continues to endanger our childrens’ innocence,’ said Christian Mothers Against Violent Video Games spokesperson Colleen Riley. “That being said, [Doom] ‘16 had a lot of squandered potential because you could just kinda cheese your way through each fight by hiding behind columns and corners and that was kinda bullshit. After reviewing a sampling of Doom Eternal’s grotesque, obscenely violent gameplay, it seems like they’ve at least balanced things a bit more to encourage you to get really competent with the shotgun and chaining glory kills early on, which is a step in the right direction.”

“All of us at CMAVVG are steadfast in our desire to see games like these taken off of the market so that young minds aren’t corrupted by their influence,” Riley continued. “But at least I can sleep soundly at night knowing that if my son plays Doom Eternal at a friend’s house or something, he’ll have to actually suck it up and get through it like a man.”

Riley says that although the mothers disagree with the game’s themes, they won’t go so far as to encourage a public boycott as long as they can raise awareness on how to play the game the way the developers intended.

“Listen, I still maintain the position that these games are bad for our youth, but if you’re going to let your kid get their hands on Doom Eternal, you should at least encourage them to play on Ultra-Violence or Nightmare,” added Riley. “That shit will really put some hair on your chest.”