Co-Worker Mysteriously Has to Poop Every Day at 3 p.m. 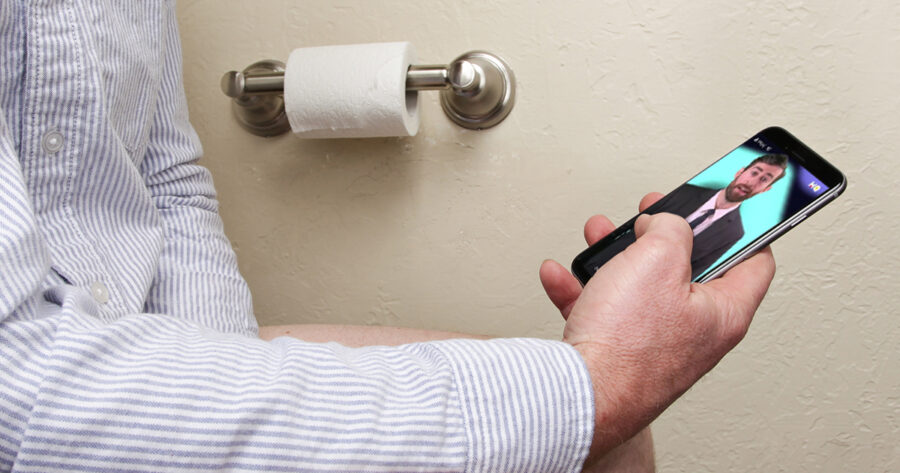 NEW YORK — Employees at Reinhart Media noticed today that co-worker Steven Harrisburg mysteriously has to go to the bathroom for an extended period of time every single day just before 3 p.m., according to close sources.

“It’s like clockwork. Every single day at around 2:57 p.m., Steven checks his cell phone and then hurries off to the bathroom. He stays there for about fifteen minutes and then comes right back,” said Hillary Pinkus, Harrisburg’s boss. “That being said, sometimes he comes back after only a minute or two muttering about ‘glitches’ or something. Then he goes to the bathroom at 3:20 p.m. Maybe he has IBS? Or OCD? I have no idea.”

Harrisburg, however, was willing to explain the circumstances of his lengthy daily bathroom visits.

“This interview is off the record, right? Yeah so I’m playing HQ on the toilet every day at work,” Harrisburg told reporters. “It’s a pretty crazy game. I play for only fifteen minutes a day and I even won money once! Sure, it was only eighty cents but if you think about it, that’s… well actually I make much more money just being at work. I guess I just like trivia.”

“Just please don’t tell anyone at my job about this. If word got out that I was playing HQ on my phone in the bathroom every day as a way to escape from the monotony from my dead-end job, I’d probably get in huge trouble,” Harrisburg added.

Despite Harrisburg’s pleas for anonymity, one co-worker confirmed that the secret is already out.

“One time, I was taking a shit in the stall next to Steven when I suddenly heard the unmistakable voice of Scott Rogowsky blast from Steven’s phone. It was followed by a couple of quick gasps and the sound being silenced,” said Reinhart Media employee James Fogarty.

“I’m not gonna tell on him, though. I don’t want anyone to find out I was in the middle of a 3-hour bathroom break on my phone to play an emulation of Pokémon Silver.”