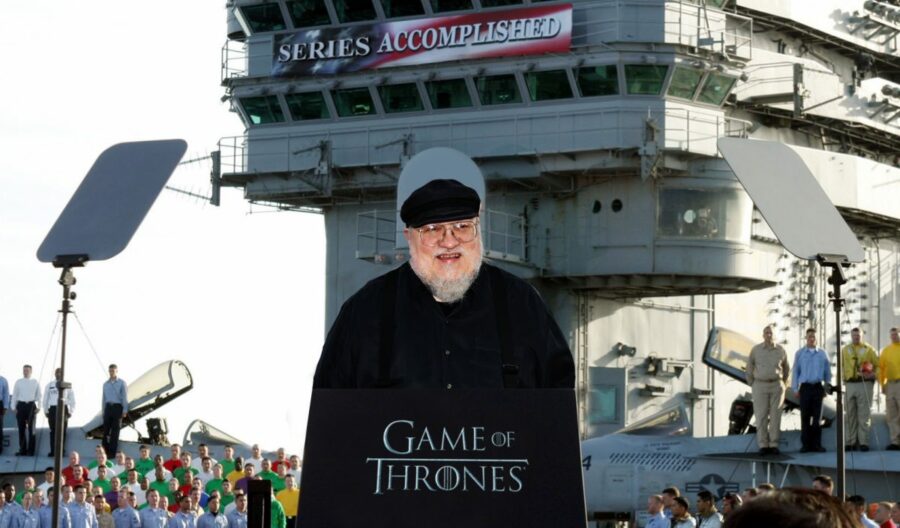 SANTA FE, N.M. — “A Song of Ice and Fire” author George RR Martin is being attacked online by fans after giving a speech under a large banner that read “Series Accomplished,” claiming that he had succeeded in completing his book series.

The series, which originally was planned as a trilogy but has now been promised as seven books, has released five novels so far, the last of which, “A Dance with Dragons,” came out in 2011. Martin has continuously pushed back the release date for his sixth book as he continues to write it, but this is the first instance of him claiming that the book series is actually complete.

“In the early 1990s, I set out to write a series of novels called ‘A Song of Ice and Fire,’ and today, we are here to celebrate the fact that the series is completed,” he said, inexplicably to a large group of military officials on an aircraft carrier. “Mission accomplished.”

The announcement from Martin comes with no new information about the completion of the sixth ASOIAF book, titled “The Winds of Winter,” or even the announcement of a companion ASOIAF book, such as the Targaryen history book he had originally planned for 2018 titled “Fire and Blood.” Fans were confused to discover that Martin also did not announce a new Dunk and Egg book or even a newly edited Wild Cards novel.

Not all fans were upset by the announcement, however. YouTuber PrestonJacobs released a 15-part video series explaining the significance of Martin’s speech, which he claims is a hint to fans about an obscure fan theory which claims Tyrion is both a time traveler as well as the mastermind behind 9/11.