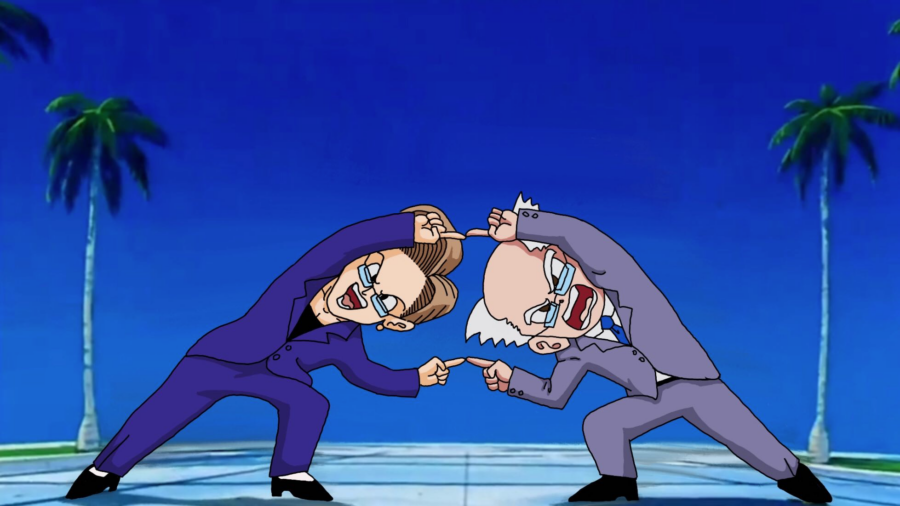 KAMI’S LOOKOUT — Sweating and breathing heavily from their strenuous efforts, sources confirmed Wednesday that Senator Elizabeth Warren and Senator Bernie Sanders were hard at work practicing the fusion dance for hours in an attempt to merge into the ideal Presidential candidate.

“Damnit, Elizabeth! This isn’t working!” exclaimed Senator Sanders, visibly agitated from an entire day of attempting the ancient Metamoran technique for fusing two bodies into a single superior entity. “How much longer is this going to take? Our positions on Medicare for All are not aligned enough! Meanwhile, our enemy is growing more powerful by the day, and we’re not strong enough to beat him separately!”

“Bernie, calm down! You just have to focus and follow my movements exactly,” said the cooler-headed Senator Warren, speaking optimistically to mask her anxiety from the memory of Trump assimilating the other members of the D Force and transforming into Perfect Trump. “We’re Earth’s last line of defense. I know we can do this, and once we do, we’ll be stronger than ever! Now let’s just review the steps one more time. I have a plan.”

Sources from both Senators’ offices say the two Democrats then resumed slowly pantomiming the fusion dance together, beginning with their arms outstretched and their fingers pointing away from one another, then gradually side-stepping towards each other in a series of movements combining elements of fighting stances and water ballet. “Imagine that we’re two rivers flowing towards each other and converging at two points on our fingertips,” instructed Senator Warren. “Or imagine our two Presidential campaign platforms and all the various ways our policy stances overlap,” she added. “That might be easier.”

At press time, sources say that Warren and Sanders were getting closer to perfecting the technique, but became discouraged after a botched attempt resulted in the two of them incorrectly fusing and getting stuck as Chris Christie for several hours.