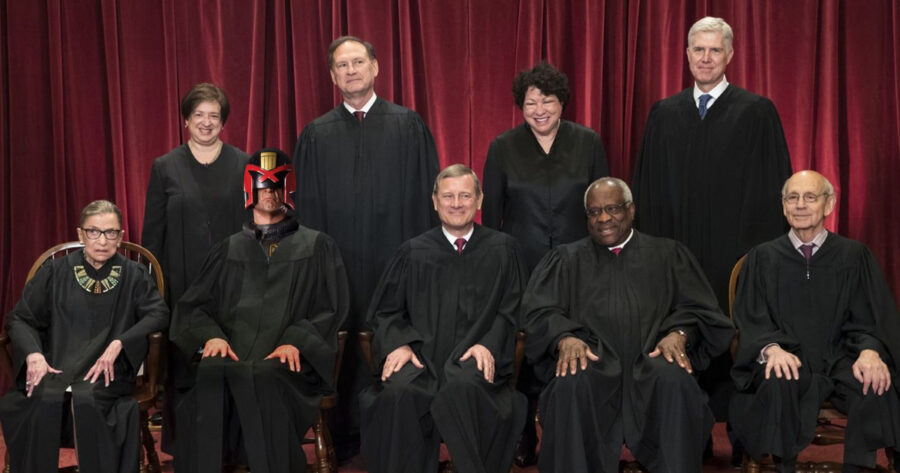 Justice Dredd has an extensive history in law enforcement arresting, conviction, sentencing, and executing criminals — all at once — as a street judge in Mega-City One; political analysts agree that Justice Dredd will be the second most conservative member in the Supreme Court’s history, after Justice Antonin Scalia.

“Loser Democrats are whining about my Supreme Court pick Judge Dredd despite his YEARS as a great law enforcer! Wonderful man!” said President Trump in a series of tweets after the decision. “Crying Chuck Schumer says he wants diversity on the Court yet tries to BLOCK first ever CLONE to be nominated – Too Bad!”

As a result of Senator Mitch McConnell removing the filibuster option, Democrats had no way to prevent the nomination and lost the vote 54-46 in the Senate.

“It’s an absolute shame to see such a fiercely fascist judge join the Supreme Court,” Democratic Minority Leader Chuck Schumer said at a press conference. “I mean, this is a guy who literally murders criminals on the streets, and he’s now a member of the highest federal court. Not to mention, he’s scaring the shit out of everyone. He has never once taken off his helmet, so we don’t even know what he looks like and he carries this giant gun that he talks to. Republicans are eating it up.”

“At the Senate hearing, Dredd kept referring to the Senators as ‘citizen’ and ‘scum,’” Schumer added. “Mitch couldn’t stop giggling the whole time.”

At press time, the newly appointed Justice Dredd was seen dragging Justice Ruth Bader Ginsburg to prison after she was seen jaywalking.