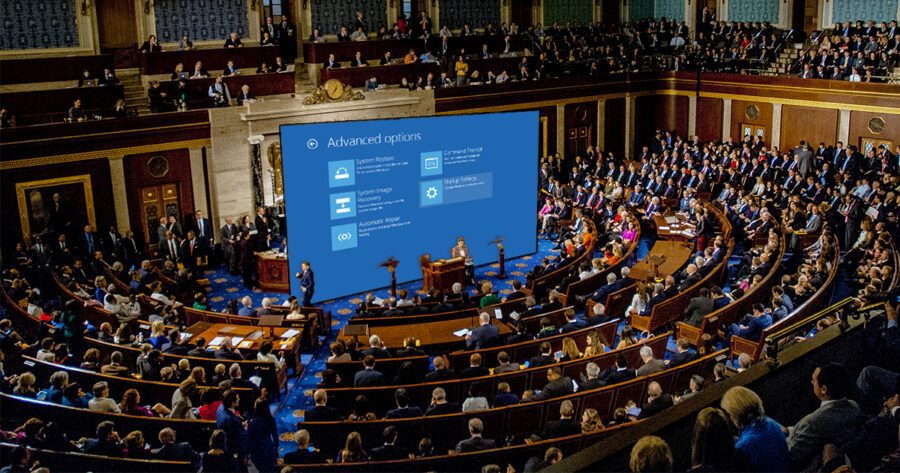 WASHINGTON — Members of the newly-inaugurated 116th Congress of the United States are already facing a fresh challenge: rebooting a shutdown government in safe mode.

Just over two weeks ago, many federal workers were stripped of their paycheck as the government unexpectedly shutdown. Democrats blame President Donald Trump, but the President claims the government was frozen and that he “must’ve hit ctrl+alt+delete at least twenty times.”

“The President held down the power button for a consecutive two minutes,” White House Press Secretary Sarah Huckabee Sanders told reporters. “There’s this great new program he wants to implement, but apparently our system has previously not supported firewalls at all. Not to mention the machine has been bogging down as of late and hard to understand from the beginning.”

“The President would prefer a system that is more user friendly,” Sanders continued, “or a solid state drive, but neither of those were outlined in this year’s budget.”

The new Congress, full of fresh, diversified faces, is expected to combat this shutdown with radical ideas not seen in the Capitol for some time.

“Personally, I used torrent clients all the time in college, so I bring a lot of experience to the table that older members of Congress refuse to consider,” said newly-elected Congresswoman Alexandria Ocasio-Cortez. “Every Congress before this has taken the government right to Geek Squad without even considering what we could do without leaving the House.”

Tensions broke out early in 2019 when Democrats argued that since there was no real “blue screen” the issue probably was not that serious. Republicans insisted that the government needed to be shutdown again, and that Congress needed to hit F4 or F8, although they could not remember which. This caused a slight schism in the party that political scientists note could undermine conservative efforts for new Turtle Beaches by the end of Q3 2019.

In the meantime, however, National Parks and federal buildings are still 404’d as there is no clear end in sight for this shutdown. Asked for comment, freshman Congresswoman Rashida Tlaib, still in hot water for calling the President a “motherfucker”, said, “This kind of bullshit never happens on my fucking Mac.”