Review: Bo Burnham’s New Special Has a Joke About Gamers, Which Means We Can Write About It 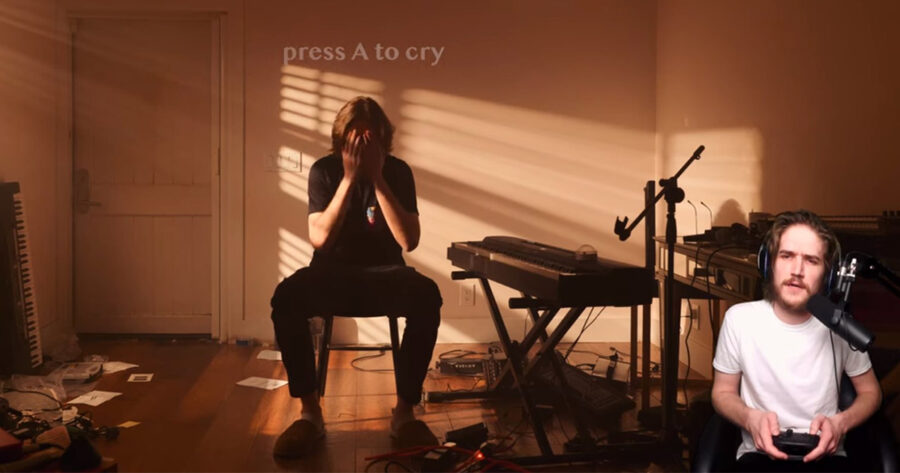 Bo Burnham’s quarantine comedy special Inside released on Netflix today and is a monumental look into a creative person’s deteriorating mental health while isolated during the COVID-19 pandemic that also includes a short goof about video games, meaning that we’re allowed to write about it even though we’re a video game website.

Inside is perhaps Burnham’s strongest work to date, despite a growing roster of incredible films already in his oeuvre. As an aging millennial who was molded by internet comedy, becoming a viral YouTube sensation as just a high schooler, Burnham has grown incredibly well with the changing times. In Inside, he once again flawlessly captures the current social and political climate, commenting on the inherent hypocrisy we all feel as we try to amplify social movements without giving in to our own narcissism. It also features a 2-3 minute sketch about watching Twitch streams that’s pretty funny, but crucially makes it OK for this article to exist on our website.

With Inside, Burnham furthers his track record as one of the most honest filmmakers working today, often letting the viewer sit on an especially raw and uncomfortable moment without ever wavering as a director. Burnham pushes this technique even further than he did in his feature film Eighth Grade, which also included a short joke about Rick and Morty, which maybe could have allowed us to review it on our website, because it sort of falls under the umbrella of “nerd culture,” but we ultimately didn’t. Maybe if the scene was more about Rick and Morty and not just a reference to the show in passing, we really could have dug into it here, but ultimately it just didn’t happen. Luckily, that isn’t the case with Inside, which you can see reviewed on our website right alongside reviews of things like Pokémon Snap and Cyberpunk 2077.

At the end of the day, Inside is going to be remembered as perhaps the strongest piece of art to come out during and about the COVID-19 quarantine and we are honored that we can review it on a website named after a PC part. You might be thinking, “it seems like you’re making a really big deal out of this. Just write the review or don’t, no one cares.” Well I care. I have a little something called “principles” and I’m not just going to write a review on a freaking video game website that has absolutely nothing to do with video games. But this special does have to do with video games. Like I already said, it has a sketch where Burnham plays a Twitch streamer playing a game that he’s the main character of. He even does little Twitch jokes like thanking people for subscribing.

And it’s not just about me and you, it’s about Bo. What if he reads this? Do you want him to think I’m some hack? Absolutely not. I know that he seems like someone who tends to do most of the work on his movies himself (Inside is written, shot, and edited exclusively by him), but what if he’s looking for writers who get his work and he comes across this review and hires me to help him with his next movie? You ever think of that? Probably not. That’s why your spec script for Ninth Grade, a sequel to Eighth Grade in which Kayla goes to high school and joins her school’s improv team and ends up competing in the national improv tournament and wins the whole thing, is never going to slide across Bo’s desk. He’ll never read your version of the script, flipping through the pages as a warm smile grows on his face. He didn’t expect to read the whole thing right then and there, but he’s captivated. It’s a masterpiece. We’re on stage now, accepting our Oscar for Best Director (he lets me co-direct the movie after seeing what a good sense of the characters I have, knowing that a fresh mind on the project will keep the style different enough from the first film). “I love you, Jeremy,” he says on the Oscars stage in front of millions of people watching on television. But it feels like it’s just us. We share our first kiss. The crowd cheers, but we don’t even hear them. Nothing matters but each other.

Inside by Bo Burnham is available for streaming only on Netflix.