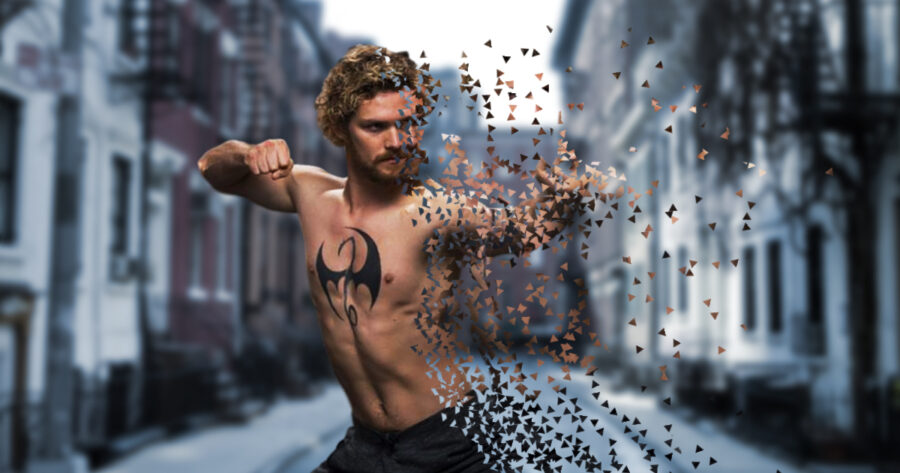 LOS ANGELES — Netflix executives were reportedly relieved to discover that Iron Fist had disintegrated during the finale of Marvel’s new film Avengers: Infinity War. At the very end of the film, the villain Thanos, utilizing the full infinity gauntlet, snaps his fingers, instantaneously destroying half of all life in the universe — including that of the Iron Fist, Danny Rand, according to Marvel executives — comforting those due to create season two of the Netflix series Iron Fist.

“Yeah, I guess Infinity War is a real downer of a film… unless you’re one of the handful of people tasked with figuring how the fuck to make people like Finn Jones’ portrayal of Danny Rand,” said Iron Fist creator Scott Buck. “When I got the call from [President of Marvel Studios] Kevin Feige that Iron Fist was one of the people included in the mass death sequence, it was a huge weight off of my shoulders.”

“Also, truth be told, I had no idea that Kevin Feige was aware that the Netflix shows are a part of the Marvel Cinematic Universe,” he added. “Good to know!”

Despite not making an appearance in the final cut of the film, the scene with Danny Rand’s death was not cut from the movie, or even filmed at all. That being said, the film’s directors Joe and Anthony Russo have confirmed that Rand’s death occurs after having a conversation with a disinterested Starbucks barista, explaining that she needs to write the entirety of “Danny Rand, the Immortal Iron Fist, protector of K’un-Lun,” on his coffee cup, before disintegrating.

Fans of the Defenders series on Netflix are equally happy about the news of Iron Fist’s fate.

“I actually have not seen Infinity War yet, but this is a very welcome spoiler,” said fan Carla Taconne. “If Thanos can find a way to also kill off only the second half of Luke Cage, all the parts after Cottonmouth dies, that would be absolutely perfect. Throw in the post-Punisher stuff in season 2 of Daredevil, and I’m #TeamThanos.”

At press time, Kevin Feige was reportedly confused by the celebrating Netflix executives, due to the fact that everyone who died at the end of Infinity War — especially those like Spider-Man and Black Panther who have unfilmed movies already announced — is “obviously going to come right back to life as soon as Avengers 4 starts, [you] morons.”