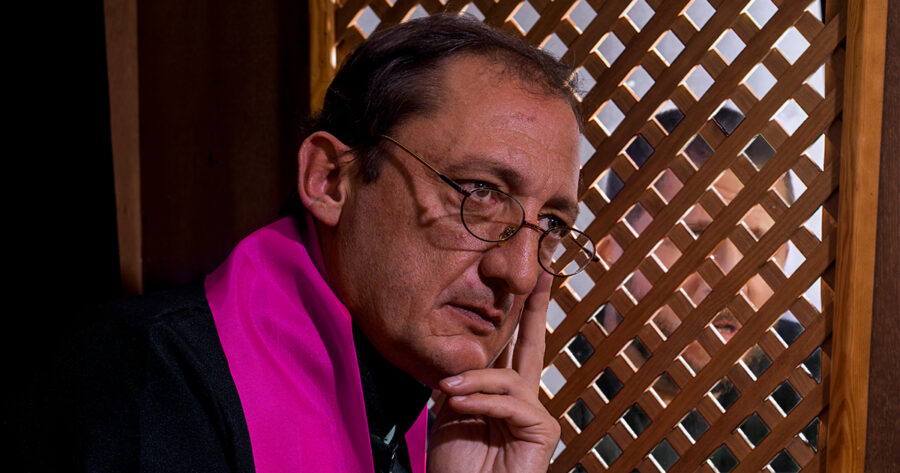 NEW YORK — After his sermon this past Sunday, Catholic priest and notable film buff Father Murphy posted up in a confessional booth, absolving church-goers of their CinemaSins and offering penance to directors who were clearly incapable of making a coherent movie.

“Forgive me, Father, for I have CinemaSinned,” said one awful director, obscured behind a grated screen. “I knew not that I included too many one-liners in my script, that I blew the budget on subpar CGI, or that I had completely failed the Bechdel test. Please, forgive me.”

Father Murphy, a priest for over 50 years and an avid movie-goer for just as long, didn’t know why so many terrible directors came to him to absolve their CinemaSins. He answered the righteous calling nonetheless.

“First and foremost, my loyalties are to the Catholic church,” said Father Murphy. “But when it comes to film, I can’t stand when the main cast isn’t introduced until a whopping 15 minutes into the movie, or when a key grip is visible in the background of one of the shots, or when the director clearly forgets to resolve multiple obvious plot holes — but, I digress. Jesus taught us to forgive and turn the other cheek, even when the CinemaSins are particularly atrocious.”

The incompetent director, who asked to remain anonymous as per tradition of the Catholic church, said he felt a newfound sense of rejuvenation after having confessed his numerous CinemaSins.

“It’s like a weight has been lifted off my back,” the director said. “After racking up a MovieSin Count of 1,572 over the course of a 20-minute video, I never thought I’d stop hearing that ‘ding’ ‘ding’ ‘ding’ in my head. I know now the only way to quiet that noise is through the forgiveness of God, and in turn, forgiving myself. After all, to CinemaSin is to be human.”

At press time, the nameless director was forced to subscribe to CinemaSins on YouTube and sit through several hours of their videos as penance for his acts against god and film.