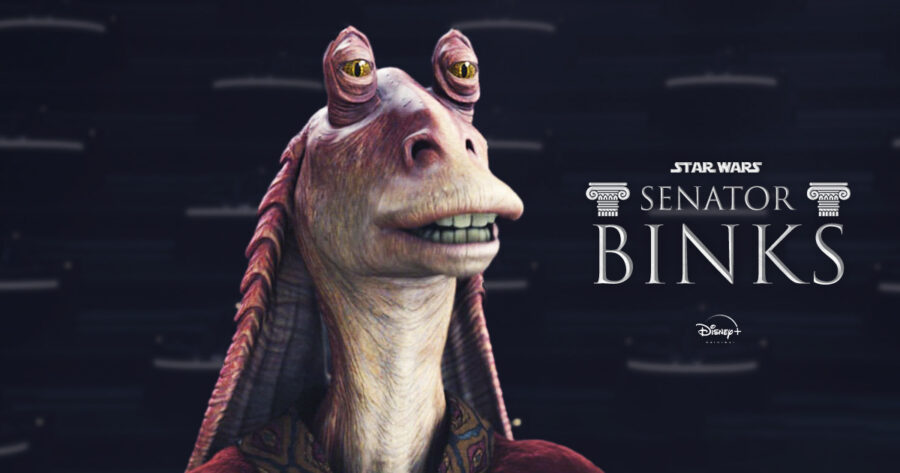 LOS ANGELES — Disney announced that a new streaming series set in the Star Wars universe will follow Senator Jar Jar Binks trying to pass a childcare care bill and will release in 2024 on Disney+.

“We hear the praise from fans who watched Boba Fett and Obi-Wan Kenobi — you want to learn more about the daily lives of Star Wars characters. Well Senator Binks is going to blow your mind,” said Lucasfilm president Kathleen Kennedy at a fan expo. “Set between the events of Attack of the Clones and Revenge of the Sith, Senator Binks explores the inner workings of the Galactic Senate and follows everyone’s favorite Gungan as he navigates backroom deals to pass a bill to increase funding for low and moderate income families. Back to his old antics, Jar Jar will be slipping and sliding all over the place in this new series, but this time, he’ll be doing so politically rather than physically.”

Kennedy was asked if the series will feature other fan-favorite Star Wars characters from previous movies and shows.

“No, the show is going to feature exclusively weird-looking aliens and freaks who Jar Jar has to convince to vote for his childcare bill by agreeing to support whatever weird stuff they’re trying to get passed. And these are Star Wars laws, so they can get totally wacky,” Kennedy explained. “One episode, Jar Jar has to decide whether or not to support a bill that deregulates the blue milk industry in order to win over a group of Senators being lobbied by billionaire Bantha owners. Jar Jar is being primaried by a Naboolian back home trying to flank him from the left, so he needs some progressive bona fides like the childcare bill, but he also needs to avoid giving his opponent too much firepower by voting for the conservative blue milk bill.”

“We’ll make sure Palpatine shows up in the background once or twice, though, so that people feel like they have to watch it,” she added.

“Finally a chance for Disney to correct the wrongs of the Prequel Series and confirm, once and for all, the Darth Jar Jar theory that we all know to be essentially canon,” said Redditor u/MioCalamar. “If they don’t do this in the show, I will be severely disappointed. I’m 99% certain they will, however.”

“J A R J A R” said a comment below, by u/CASHYYYYYYYYK, which gained 50,000 upvotes by the time of this article’s publishing.

At press time, Kennedy confirmed that Lucasfilm will be utilizing AI technology to recreate Jar Jar actor’s Ahmed Best’s voice for the series, after the actor was asked to reprise the role and responded by saying, “go fuck yourself.”