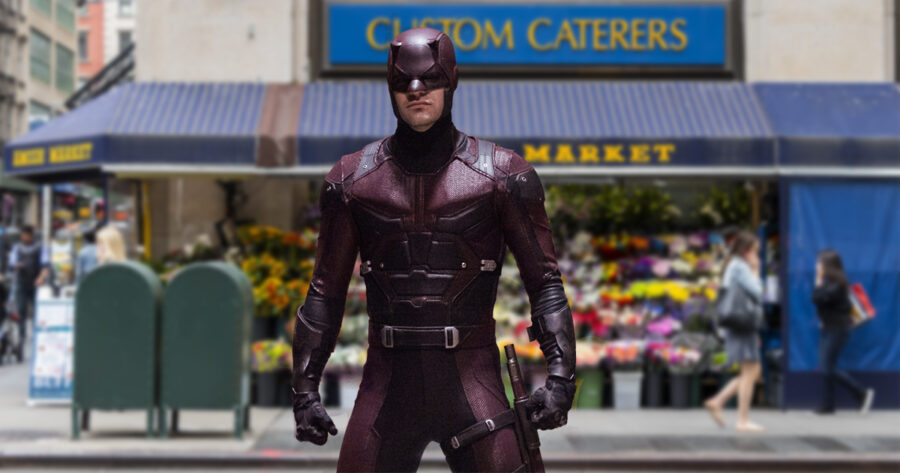 NEW YORK — The Devil of Hell’s Kitchen, a masked vigilante known as Daredevil, was reportedly too busy fighting a shoplifter to join  humanity’s last hope, the Avengers, in their all-out war against Thanos, the Titanian-Eternal trying to wipe out half of all life across the universe. Sources close to the incident report the alleged shoplifter was attempting to steal a $6 bacon-egg-and-cheese-on-a-roll at an uptown bodega.

“It’s very important for me to protect my hometown, Hell’s Kitchen, a small, mostly upper class neighborhood of New York City,” Daredevil explained as four-armed aliens known as “Outriders” pillaged the streets of Manhattan. “What if that bodega guy turned out to be a ninja, huh? There are a lot of ninjas running around and someone needs to stop them. That someone is me.”

“Also, the Avengers never invited me to their stupid group,” he added, petting a cat in the bodega.

Daredevil and other ground-level NYC metahumans have been growing increasingly bitter about not being asked to join Tony Stark’s superhero team known as the Avengers, sources confirm. Fellow crimestopper Jessica Jones is said to even pretend to not know the names of those in the Avengers, despite their worldwide (and in some cases, multi-worldwide) celebrity status.

“The big green guy and the flag waver? Yeah I think what I have going on here in the Lower East Side is a little more important than whatever that Mr. Spiders is doing up in space,” Jones told reporters. “Have you ever heard of a little somebody called Kilgrave? You haven’t? OK well Google him, because even though he might have died, there’s still a lot of really interesting stuff going on with his…. OK the reporter I was talking to was just crushed by a falling building.”

Although Tony Stark declined to comment through a spokesperson, he noted he welcomed all of the Defenders in the fight against Thanos, except for Danny Rand, the immortal Iron Fist and protector of K’un L’un, due to him being, “just super fucking boring.”