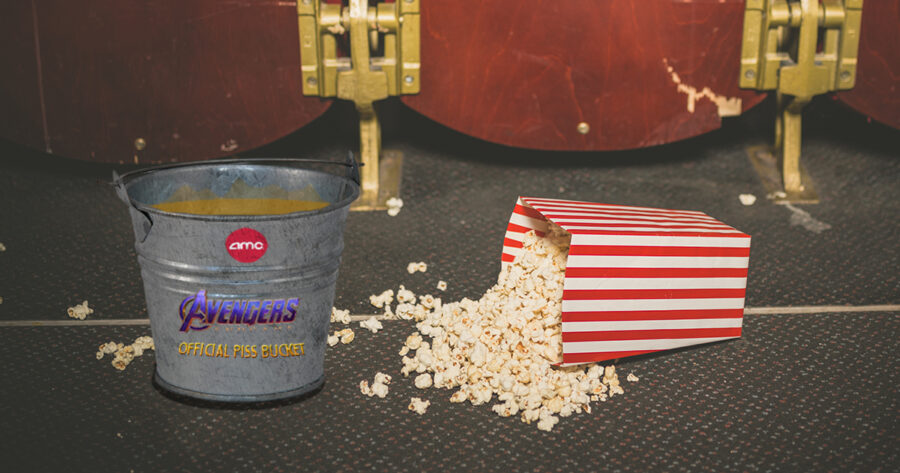 KANSAS CITY, Mo. — Marvel fans are outraged after AMC raised the price of their limited edition Avengers: Endgame Piss Buckets from $20 to $30 due to increased demand. The official Piss Buckets are being sold as collectors items, but also to help moviegoers pee throughout the 3+ hour runtime of Avengers: Endgame without missing any crucial scenes.

“We figured that a couple thousand people worldwide would want to buy the official Piss Buckets, maybe to piss in once during the film and then hold onto as a piece of memorabilia. We did not expect to get millions of pre-orders on the first day,” said AMC CEO Adam Aran at a press conference. “We had to raise the prices. It’s a simple issue of supply and demand.”

“That being said, if you even think about bringing your own non-official piss bucket to Avengers: Endgame,” Aran continued, “so help me God, I will drag you from that theater myself.”

Longtime fans of the series, however, are not pleased with the price increase. Many have taken to social media to voice their complaints publicly.

“It’s fucking bullshit that Marvel is putting out a movie that’s three hours long, not to mention filled with spectacle, and they don’t offer affordable piss buckets for their fans. $20 was already so expensive, and if everyone buys a large 30oz drink, we’re each going to need our own bucket,” said u/StuckyFan93 on Reddit’s r/marvelstudios. “So fuck AMC. Every theater by me lets you have free refills and I am officially using that offer to fill my large soda up with urine as soon as I finish it.”

As of press time, despite pleas from fans to keep prices low, close sources have revealed that AMC is even considering increasing the cost of official Avengers: Endgame tissues after realizing that many fans were not using them to wipe away tears.