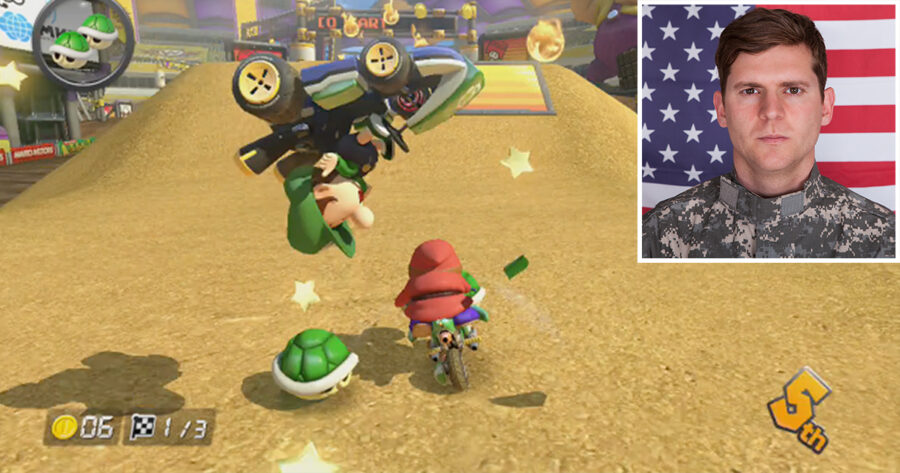 CLEVELAND — Local Mario Kart 8 player Brendan Kirkman was reportedly recruited to be an elite sniper for the United States Military following an occurrence in which he hit an enemy with a green shell on purpose, according to those familiar with the situation.

“The kid’s got serious potential,” said Army recruiter Sgt. Aaron Kloppfer. “3rd place, one green koopa shell, lands a shot from 50 yards away. Incredible. Usually these things just bounce back and forth off the walls until they end up coming right back to hit ya—‘least that’s been my experience. Let’s see how he does murdering our enemies abroad.”

Kirkman was stunned and confused at the numerous phone calls, emails, and unsolicited visits to his home.

“It’s crazy man, maybe I was playing online against some kind of top brass or something?” asked Kirkman. “I didn’t think my life would change after racing on Choco Mountain, but I’m shipping off on Tuesday to Afghanistan. They said I should be ready with no training needed, but I’m playing some extra matches in the meantime just in case. Hopefully the snipers are hooked up to GameCube controllers, because I don’t fuck with joycon drift.”

Sgt. Kloppfer confirmed that this was not the first time that the military has used Mario Kart to seek out potential recruitments.

“Oh, you see it all the time,” Sgt. Kloppfer said. “Someone comes up to us at a booth, says they got a 1st place lead after an 8th place comeback. I always ask, ‘what kind of shell did you use? Red? Come back when you’re a pro, kid.’”

At press time, Kirkman was promoted several ranks after launching a banana peel and hitting someone directly ahead of him.