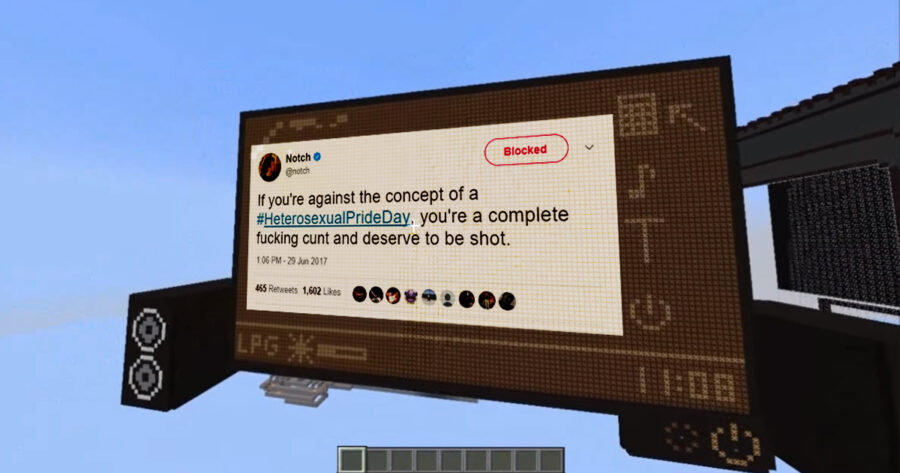 Whoa! We spoke to the brilliant Cody Bigley today, who used hundreds of thousands of blocks in the virtual world of Minecraft to build a fully functioning computer that allows users to log onto Twitter and block Minecraft creator Markus Persson.

According to Bigley, he wanted the computer in Minecraft to work as well as those that people use in the real world.

“A lot of Minecraft computers are glorified calculators” said Bigley. “But in real life, that’s not what people use computers for. People use their computers to go on Twitter, see whatever insane thing Notch just said, and decide enough is enough before finally blocking him.”

The incredible Minecraft computer does not use any add-ons or mods, but instead utilizes only the standard in-game tools for what is known as “redstones” in order to build the machine that defies the very man who created them. Wow!

Educators around the world are already looking to Minecraft to teach programming students, but a teacher at Stafford Middle School in upstate New York is now using Bigley’s creation to teach students an even more valuable lesson: how to calmly browse Twitter without seeing a guy who made a video game call random women “cunts.”

“Minecraft is such a powerful tool to get kids interested in programming because it takes a difficult concept and puts it into a fun game,” said Emanuel Krashinsky, the school’s science and technology teacher. “But there’s nothing that gets kids more into learning programming than using it to block a guy who says if you don’t support a straight pride parade you are a bigot. I’m not even that progressive but holy shit.”

So what’s next for the genius video game inventor? Cody Bigley says his next project is going to be even more expansive. You can watch him on Twitch as he builds an elaborate million-block program in Minecraft that, when used, generates a non playable character who runs across the server to Markus Persson’s in-game house and delivers a letter that says “Find a purpose.” Awesome!