Splatoon 3 Rainmaker: How to Play and Improve 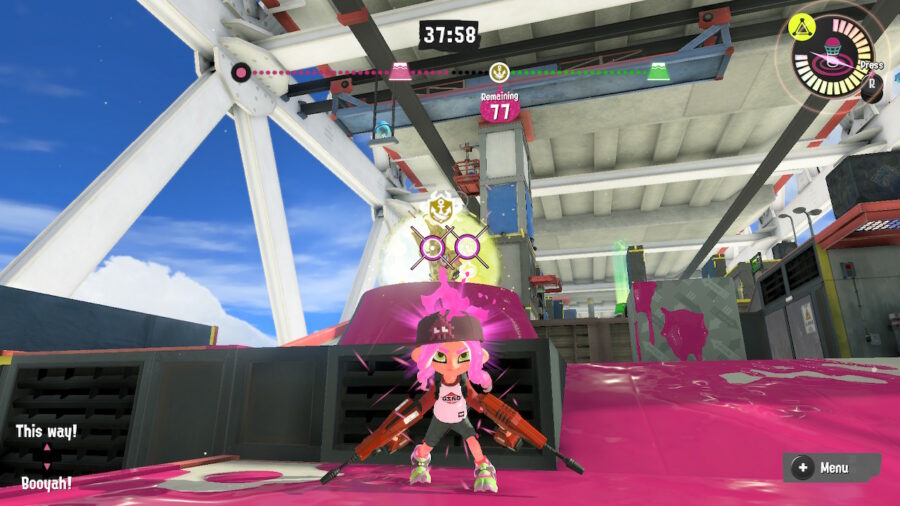 Rainmaker is one of four ranked modes available to players in Splatoon 3, accessible in the regular rotation of modes offered through the Anarchy Battles playlist accessible to players after reaching level 10 (or level 2 if you have save data for Splatoon 2 on your Nintendo Switch). It’s an objective-based mode where the aim of the game is to transport the special rainmaker weapon to the goal in your opponent’s side of the field, with the first to do so or take it the furthest within five minutes being crowned the winner.

These are the basics, but how does Rainmaker actually work, and how can you take your play from a B- rookie to an S+ master? That’s what this guide will introduce to you, with an explainer of all the basic rules and useful techniques needed to master Rainmaker in Splatoon 3 and its changes compared to earlier entries in the series.

What are the Rules of Rainmaker? 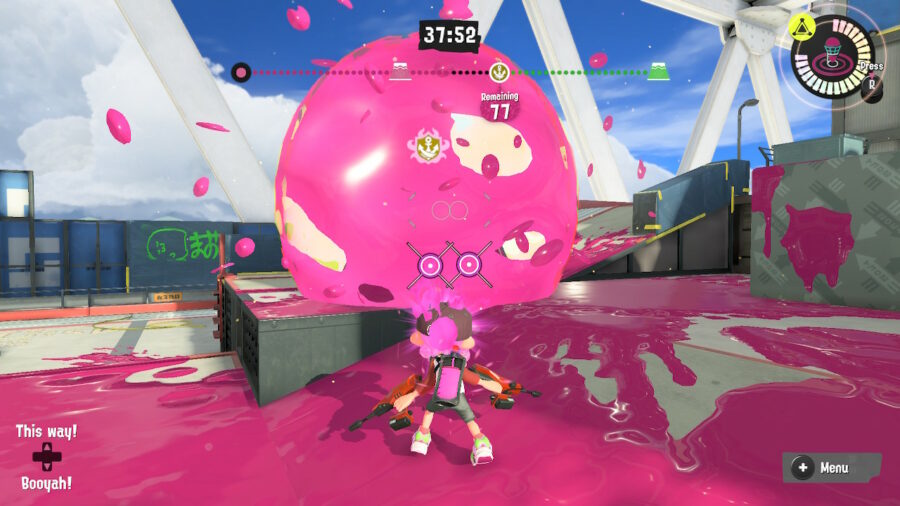 First things first, the basics. Rainmaker is a mode in Splatoon 3 where teams each have five minutes to take the rainmaker from the center of the arena to the goal, with the winner being crowned once a player has reached the goal. If no team has reached the goal at the end of the time limit, the player to have pushed the Rainmaker the furthest within the time limit will be crowned the winner.

The rainmaker starts each match in the center of the arena encased in a shield that must be popped by shooting it using ink from your weapons and bombs. Once this shield has been shot enough team’s with one team’s ink, the shield will explode in a brief radius around the weapon before leaving the weapon exposed, allowing either team to collect the weapon from its location. The player holding the weapon can not relinquish control of the Rainmaker once they have collected it, and their goal is to transport the rainmaker to the opponent’s goal in order to win the match.

What Does the Rainmaker Do in Splatoon 3? 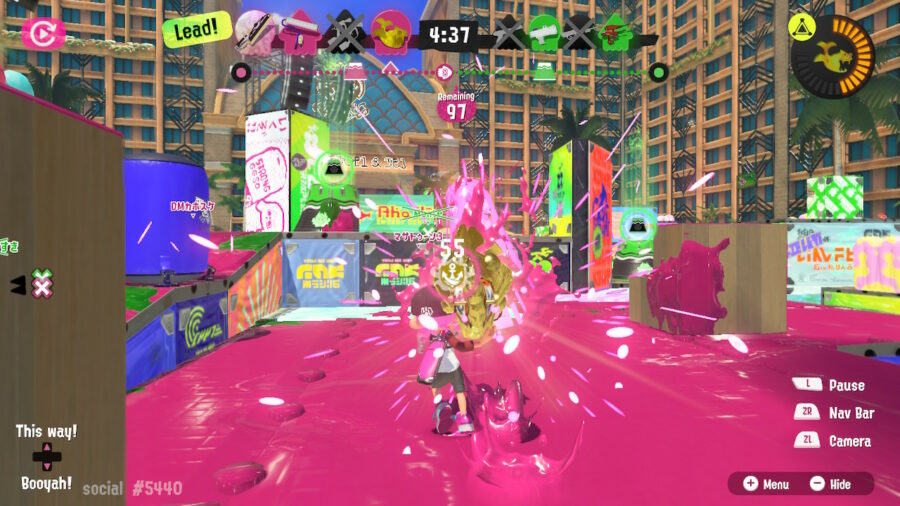 The Rainmaker acts like a Special Weapon while in the player’s possession. You won’t be able to use your main weapon, but you will be able to fire super-charged shots from its mouth. Tapping the button will release a small trickle of ink directly in front of you, enough to make minor progress in any direction through enemy ink and potentially useful for a last-minute grab for the lead when death appears near-certain. By holding the fire button, you can fire a ball of ink in front of you, which will explode upon impact.

This means the player holding the Rainmaker isn’t powerless and solely reliant on your teammates to make a push towards the goal. You can assist your team, and indeed, should work together with them to use your superpowered shots alongside their dispatching of mobile enemies in order to clear a path to the goal.

The Rainmaker does have some disadvantages, however. Players carrying the weapon can’t use their Specials, nor can they move with as much speed either while working or traversing through ink as they could without carrying the weapon. This makes you more reliant on working with your team in order to make the best move towards victory.

How do Checkpoints Work in Rainmaker in Splatoon 3?

In a change from previous entries in the series, Rainmaker in Splatoon 3 is made up of checkpoints that a team must clear before reaching the final goal.

For example, in the level Hammerhead Bridge, the final goal each team must reach to win the match is situated close to the opposing team’s base. However, before teams can place the Rainmaker on that pedestal, players must first take the Rainmaker to a pedestal closer to the center of the map, where the Rainmaker will then reset and must be popped again before it can be recollected and taken to the goal.

This slows the match down and forces teams to take careful consideration of enemy location and strength before making a forward push. An effective push for victory in this mode should claim map control and push the enemy back so the Rainmaker can make its way to each pedestal unimpeded. Only pushing forward with player advantage unless the game is reaching the closing stages and you are in a losing position should ensure you can safely reach and move beyond these checkpoints without being stopped in your tracks by a well-timed sniper or blaster to the face.

What are the Best Weapons to Use for Rainmaker?

Rainmaker is a mode reliant on map control similar to Turf War, with the best weapons being those that can quickly dispatch your opponent in offensive situations and slow your opponent when on the defensive.

The best weapons for Rainmaker in Splatoon 3 are the Dualie Squelchers, thanks to their versatility and ability to quickly traverse the map while being difficult for opponents to splat, as well as their special weapon. Dualies are two-handed weapons that fire shots from guns held in each of your Inkling’s hands, and have the added ability of allowing your character to dodge roll while shooting for improved accuracy and to dodge your opponent’s shots. Coupled with the new Squid Roll ability that allows players to jump roll out of the ink into the opposite direction of travel essentially offers all Dualie weapons an additional roll in offensive or defensive situations, making it even more difficult for opponents to lock on to you and splat you.

Furthermore the Wave Beacon is a particularly useful defensive item in Rainmaker. Due to the slower movement of the Rainmaker character it is more difficult for this player to dodge upcoming waves, making it a severe impediment when an opposing team is making an offensive push.

Another effective weapon in Rainmaker in Splatoon 3 is the Heavy Splatling, thanks to its heavy rate of fire from a distance. After charging the weapon it’s possible to completely wipe through the Rainmaker shield in a single charge. Typically a player using a Splatling won’t be charging into the action, standing and firing from a distance in order to clear enemy lines for the team and Rainmaker to advance. The weapon’s strength against the shield and in team fights from a distance make it an effective counter to your opponent’s actions.

Finally, we recommend using a Shooter like the N-Zap 85. Not only does the weapon’s rapid rate of fire make it effective in a 1v1 fight with another player, its Tacticooler special offering additional strength to your team and instant respawn is crucial in a mode where even a few second with all players off the field could result in an unassailable push from your opponent into your area of the field and towards your pedestal.

Controlling the Map in Rainmaker in Splatoon 3 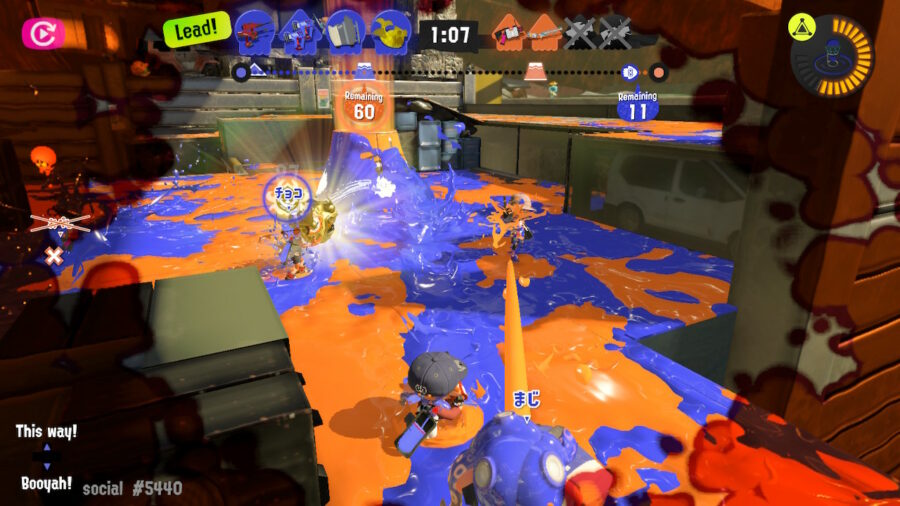 Map control is crucial in achieving victory in Rainmaker in Splatoon 3. Unlike Turf War, where the objective is to control as much of the map as possible to win, your objective is simply to carry the rainmaker to the goal. However, with the goal being situated deep inside your opponent’s area, it’s nearly impossible to make an effective and reliable game-winning push for the goal without the support of your team and control over the map.

Map control is important in Rainmaker as it allows you to swim through the ink to flank your opponent’s and make an offensive push, reducing the number of active players on the field by splatting them in order to create a clearing to take the Rainmaker forwards. A balanced team composition with players who can defend the rainmaker and pick off opponents from the back (using snipers or splatlings) or front (with shooters, blasters, brushes or dualies) makes it possible to assert control over the crucial center of the map where the Rainmaker spawns and resets and makes it difficult for your opponent to push forwards or mount a comeback.

What is important is that you create a degree of pressure on your opponent which stops them from being able to flank behind you and pick off key members of the team that will prevent you from earning points. Only by controlling the map can you control the opposing team.

Player Advantage and When to Push the Rainmaker in Splatoon 3 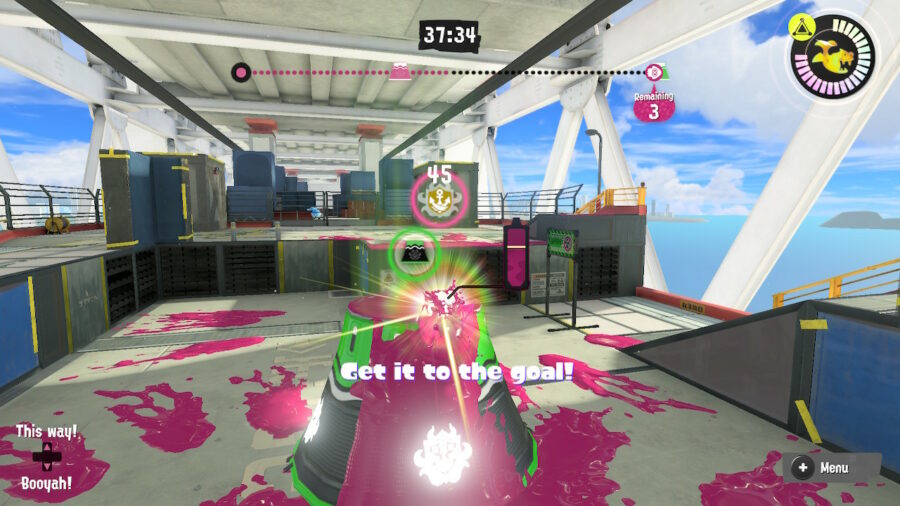 Similar to the importance of map control, understanding player advantage is key to understanding when is best to hold back and when is the moment to make a break for the Rainmaker checkpoint or objective in Splatoon 3 Anarchy Battles. What is easy to forget in the heat of the battle is the effectiveness, strength and range of the Rainmaker as a weapon, making it unnecessary for the player controlling the Rainmaker to lead the team from the front unless they are making an objective push.

Allowing close-range teammates to move forward and pick off opponents while using the Rainmaker to shoot charged shots from afar is an effective strategy to retain control over the objective and map as it forces the opponent to focus on putting a stop to your push rather than pressing for advantage.

There is nothing wrong with taking things slow and holding back with the Rainmaker until the time is right when you reach a 4v2 situation where your opponent only has two players available to stop your play before making a push for a checkpoint or the goal. Such a delay can be the difference between victory and defeat as it makes you more likely to earn more points or even reach the goal and end the match if you have less people standing in your way to stop you.

With a full map in play there is no need to narrow the playing field into a single strip. Flanking the side of the map in order to take out opponents by swinging along the map with the Zipcaster, or swimming through ink in order to swipe at an opponent when they least expect it, then making a jump for the objective, is a strategic way to claim victory in Rainmaker in Splatoon 3, even from the jaws of defeat.

How to Improve at Rainmaker in Splatoon 3 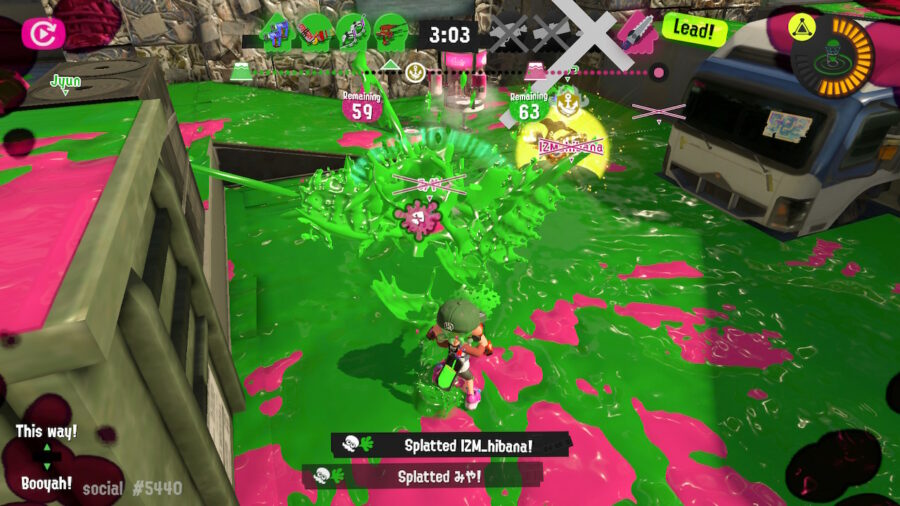 Ultimately, as with any game, practice makes perfect, and Rainmaker in Splatoon 3 is no different. By playing lots of matches, it’s possible to learn what is a good play and what weapons you are most effective with, and which are more likely to hold you back or that you should avoid direct confrontation with wherever possible.

Watching replays of your own matches in the game’s new replay system is a good way to learn from past mistakes, and watching the matches of higher-ranked is another method of learning what moves are good and which are more likely to send you down a spiral of defeat.

However, remembering when is the most opportune time to make an objective push using player advantage and learning how to take advantage of the Rainmaker’s own unique strengths as a weapon are important tools in your quest for Splatoon 3 ranked supremacy. In many matches, both teams will likely have one moment where the opportunity exists for one player to seize control over the match and guide their team to victory, if they can effectively assess the importance of player advantage, map control and the opportune moment to push for the checkpoint and goal.

Over time, practice and an understand of what works and what doesn’t will make it easier to spot how to secure victory in this complex mode. Only then can you turn your Splatoon 3 Rainmaker escapades from B- blues to S+ celebrations.