Find out all the best moves for your Rumbleverse loadout. 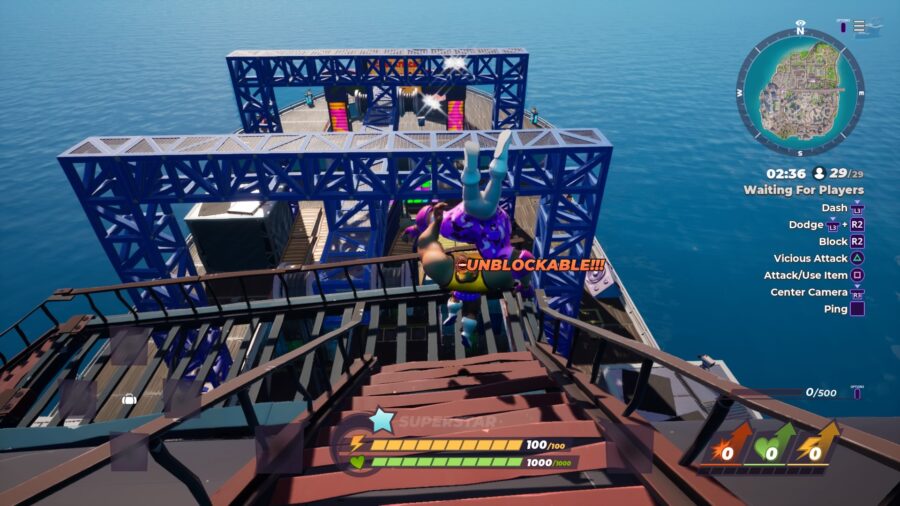 Before you can become a great Rumbleverse player, you need to master the basics. Superkicks and Giant Swings may look pretty and do some great damage, but you can never be sure which Skill Magazines you’re going to come across each time you launch into Grapital City. However, your basic moveset will always be available to you. By mastering each of these moves and learning which situations they’re best suited for, you’ll be ready for anything, even if you find nothing but Volleyball Dive Magazines. This is what separates the jobbers from the main-eventers, folks. 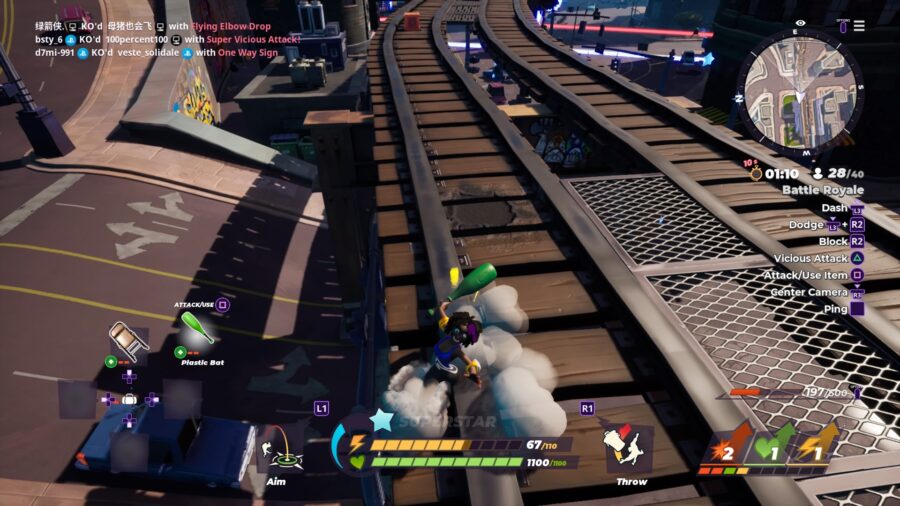 Your Basic Strike is a Chop that does a small amount of damage. Striking two additional times will perform a combo that does moderate damage and knocks down your opponent, leaving them open to a follow-up Elbow Drop. Your combo can also be altered by pressing Vicious as the second or third input. Strike, Vicious will perform a roundhouse kick that knocks your opponent away *without* knocking them down. This can be useful for aggressive players who don’t want to give their opponent the brief moment of (mostly) invulnerability that being knocked down provides. Strike, Strike, Vicious will perform an overhead axehandle that launches the opponent up and behind you. This can be devastating when performed near the water’s edge or on top of a building, and the very skilled may even be able to catch them in the air for a follow-up attack.

Your Basic Vicious Attack is an unblockable Suplex that does a moderate amount of damage and knocks down your opponent. If a player keeps blocking all your Chops, this will break through their guard and make them a little less certain of how to defend against you. Be warned: Basic Strikes will override Vicious Attacks due to their higher move priority, so Vicious Attacks should generally only be attempted when your opponent is guarding, in a recovery animation, or unaware of your presence entirely.

Performing a Vicious Attack while in Superstar Mode and it becomes a Super Vicious Attack: an unblockable and devastating move where you grab your opponent, toss them into the air and then give them a spinning piledriver into the ground. Unlike Basic Vicious Attacks, the Super Vicious Attack cannot be interrupted by Basic Strikes or indeed any other move in a head-on collision, so feel free to press that button as soon as another player is in range. Try landing on a car mid-Super Vicious Attack to bounce back up for extra height and damage! 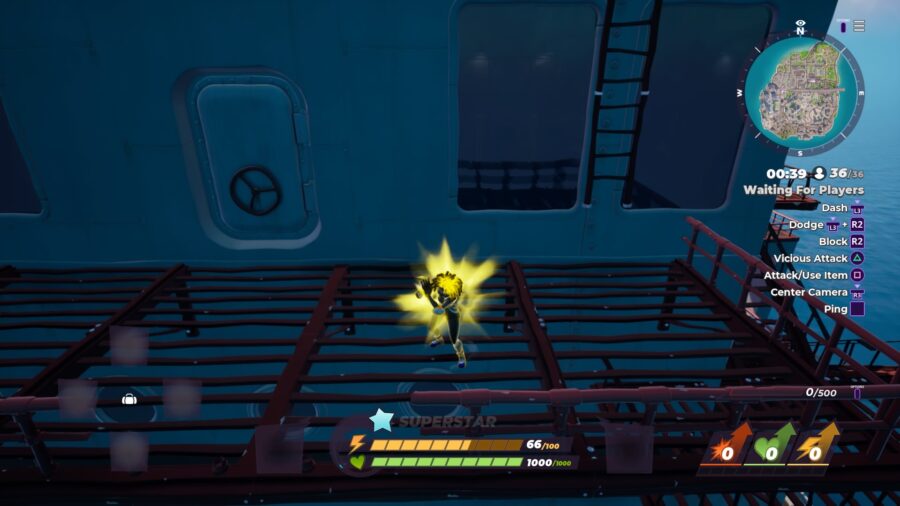 Your charged Basic Strike is a strong Chop that stuns the recipient for a significant length of time. Newer players tend not to be aware of this move’s hit-stun, so you can catch them off-guard fairly easily, leaving them open to one of your more powerful Skills or your Super.

Your charged Vicious Attack is a powerful ground pound that does unblockable knockback in a wide area. In theory, this should be a great attack for dealing with multiple opponents at once. Unfortunately, the low move priority of Vicious Attacks make this fairly impractical in those situations. Our advice: forget this move exists. 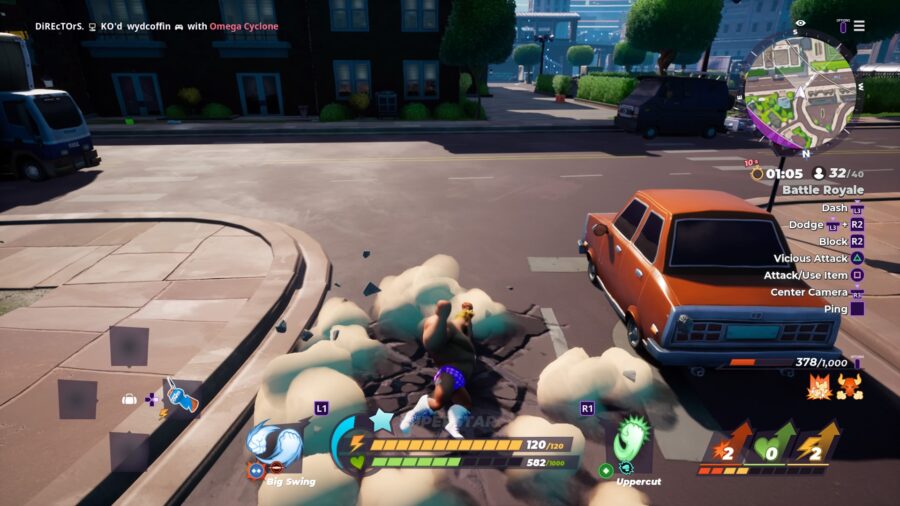 Your jumping Basic Strike is a diving Elbow Drop. This move does more damage and hits a wider area when performed from higher up, making it excellent for surprising a group of opponents who are busy fighting each other. You can get additional airtime (and thus, damage) on your elbow drop by landing on a bouncy surface – like a car or a parasol – before landing on your target. The elbow drop is also one of the only attacks in the entire game that can hit an opponent while they’re knocked down, and for this reason alone it is an incredibly valuable weapon in your arsenal.

Your jumping Vicious Attack is an unblockable Suplex, the same as when done standing. The only real use for this move is attempting to catch an opponent after they have been launched into the air, or smashed against a wall. Not a move you’ll likely be using all that often, but worth remembering for those moments. 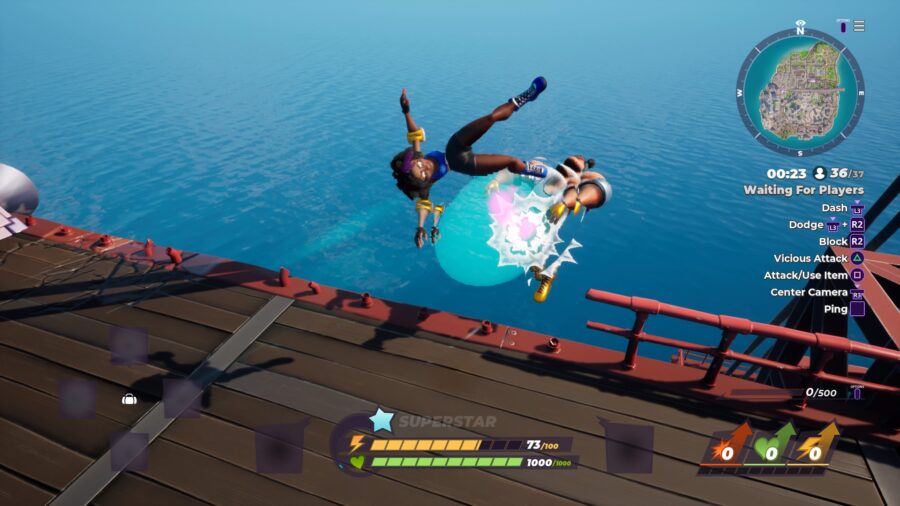 Your dashing Basic Strike is a running Dropkick. This does a moderate amount of damage but more importantly, has extremely high move priority. Your Dropkick will defeat almost any other move in a head-on collision. Naturally this is an excellent attack to use when approaching an opponent, and you may be tempted to simply spam this attack over and over again. However, it’s worth noting that when successfully blocked or avoided, this move leaves you very open to a counterattack. Spam at your own peril.

Your dashing Vicious Attack is an unblockable Irish Whip: you grab your opponent and can then throw them in any direction, causing them to run on your chosen path for a short while until tripping over and receiving mild damage. Not a particularly impressive move on its surface, but it can be much more devastating when used to throw an opponent off of a tall building, or into a wall to set up for a follow-up attack. Experienced players who see you dashing towards them will likely expect a Dropkick and block, so the Irish Whip can be a great way to catch them off-guard. 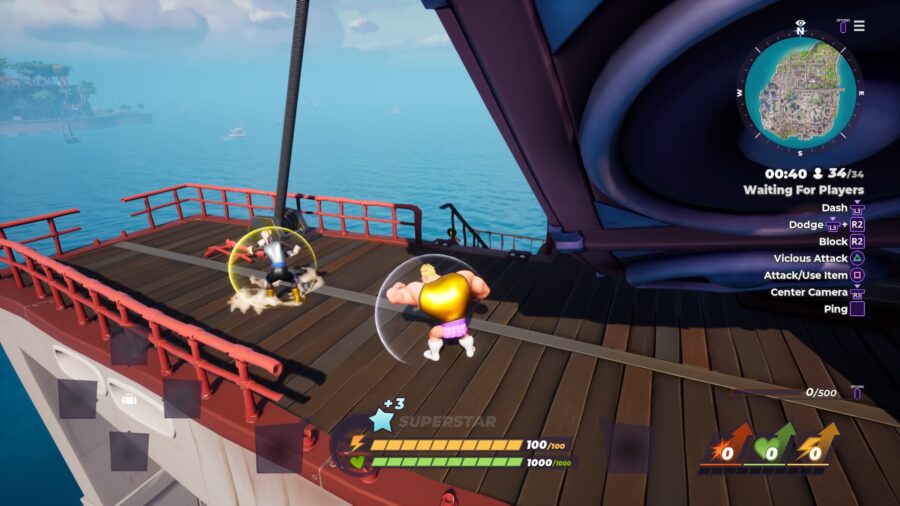 Your two main defensive options are dodging and guarding. You are completely invincible during your dodge animation, however you are left vulnerable in the moment that the dodge ends. This makes the dodge ideal for avoiding Vicious Attacks and singular Striking moves like the Dropkick or Superkick, but not a great option for avoiding basic Strikes and multi-hitting Skills such as the Sumoslap or Cyclone. Dodging also uses Stamina, so be careful not to get Winded and leave yourself open to a Stamina Break. When engaging with multiple opponents at once, be sure not to accidentally dodge into another attack.

Guarding is your most solid defensive option, protecting you from all Striking attacks. After successfully guarding against a Strike combo or Skill, your opponent will usually be left open to a counterattack. You also recover your Stamina faster when guarding, so it’s worth doing any moment you have time to catch your breath. However be careful: if an opponent glows red, that means they’re about to do a Vicious Attack, which cannot be guarded against. If you see that red aura, dodge immediately. And while your Stamina does recharge faster while guarding, successfully blocking attacks will still reduce your Stamina. If your guard turns yellow, that means your Stamina is running low. Continue to block too many attacks and it will deplete to zero, resulting in a Stamina Break that will leave you defenseless.

There is a third defensive option that many newer players may not be aware of: the move cancel. By pressing dodge and guard simultaneously in the middle of certain moves, your wrestler will cancel their attack and dodge backwards. This has a number of valuable uses, for instance if you’re charging up an attack and see your opponent dashing towards you for a higher priority Dropkick, you can cancel your attack, avoid the Dropkick and then counter while your opponent is still recovering. Likewise, if you start a Strike combo and your opponent successfully guards your first Strike, you can cancel mid-combo to prevent being left vulnerable after your final Strike is blocked. This is a tool that does not currently seem to be utilized by most players, so take advantage of their ignorance while you can. 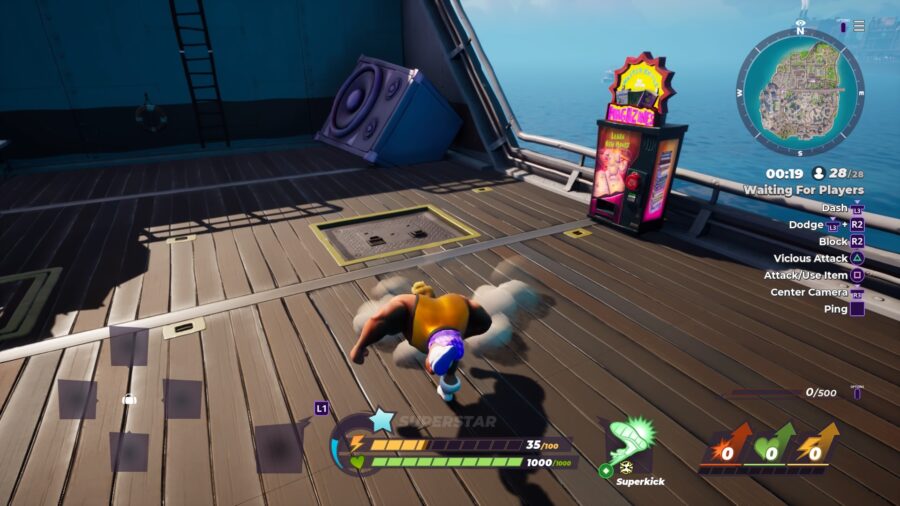 Your wake-up Basic Strike is a Backfist that does a small amount of damage in the area around you and knocks opponents back. This Backfist has the same high priority as the Dropkick, making it a fairly safe choice for a wake-up attack (it can also catch relentless players trying to Elbow Drop you while you’re down). However, wary opponents will attempt to bait out the Backfist, dodge or block and then quickly counterattack.

Your wake-up Vicious Attack is an unblockable Low Blow that does a small amount of damage and stuns your opponent in a similar way to your Charged Strike. If an opponent is guarding in anticipation of the Backfist, the Low Blow is a great way to catch them off-guard and open them up to a vicious follow-up attack. The Low Blow has a fairly limited range however, so it should only be attempted when the opponent is very close by.

Your wake-up dodge is, well, a dodge. The safest option if you want to completely avoid the chance of being attacked again, you can even quickly follow with a regular dodge to put some extra distance between yourself and whoever knocked you down. Go with this if you’re feeling a little outmatched or overwhelmed and want to retreat.

Now you have a complete understanding of the best Rumbleverse moves available to you and every other player. With this knowledge you’ll now have a better concept of what your opponent may be trying to do, and how best to counter their plans. And you won’t need a Chokeslam or Diamond Crusher to do it!