Persona 5 Royal: How to Defeat the Reaper

To beat a Persona mainstay super-boss, see your back-alley doctor and let death kindly stop for you 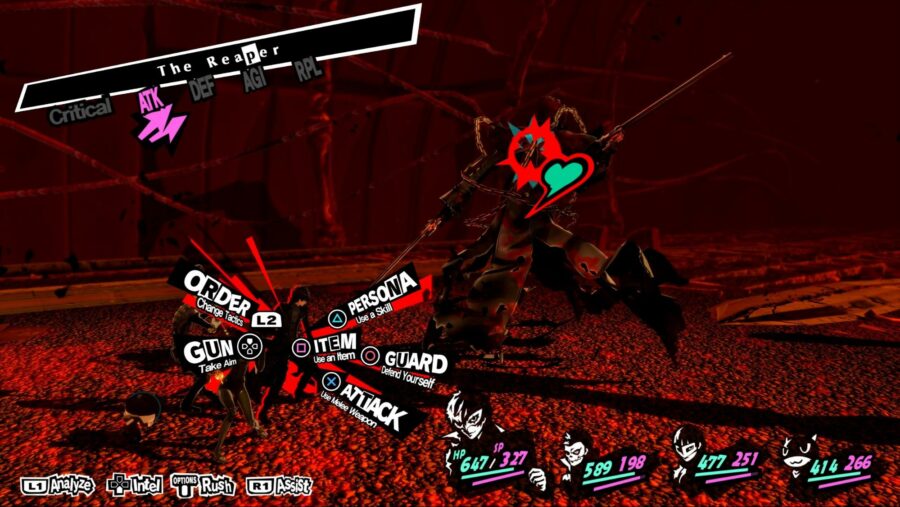 Across the Persona series, there are plenty of incredibly tough enemies. Perhaps the most feared is The Reaper, an entity that shows up again in Persona 5 Royal when the Phantom Thieves stay too long on any floor in Mementos. In the original Persona 5, players could exploit the game’s Flu Season to defeat The Reaper with embarrassing ease. For Persona 5 Royal, this crippling weakness has been fixed and The Reaper is at full power. Luckily, it isn’t too difficult to exploit another key weakness in the Persona 5 Royal Reaper and defeat it with minimal casualties. We’re here to tell you everything you need to know to beat The Reaper.

The Reaper in Persona 5 Royal is level 85, but players can be fit to challenge it from around level 60 if they’re well-prepared and equipped with the right items. This would place the ideal time to face The Reaper as anytime after the sixth Palace. The Reaper has no weaknesses or resistances, so there should be no reservation about going all out. To get The Reaper to appear, go to any floor in Mementos and find a spot to just wait. It may help to go to an early floor so that the weak enemies run away from you so you don’t accidentally reset the clock with a fight.

When you hear those ominous chains start rattling and Morgana tells you to be careful, that means The Reaper is somewhere on the floor. Drive around and find him, but do not initiate a battle. Against all logic, you should let The Reaper ambush you. This will cause The Reaper to get one turn instead of two turns in a row.

How to Prepare for The Reaper 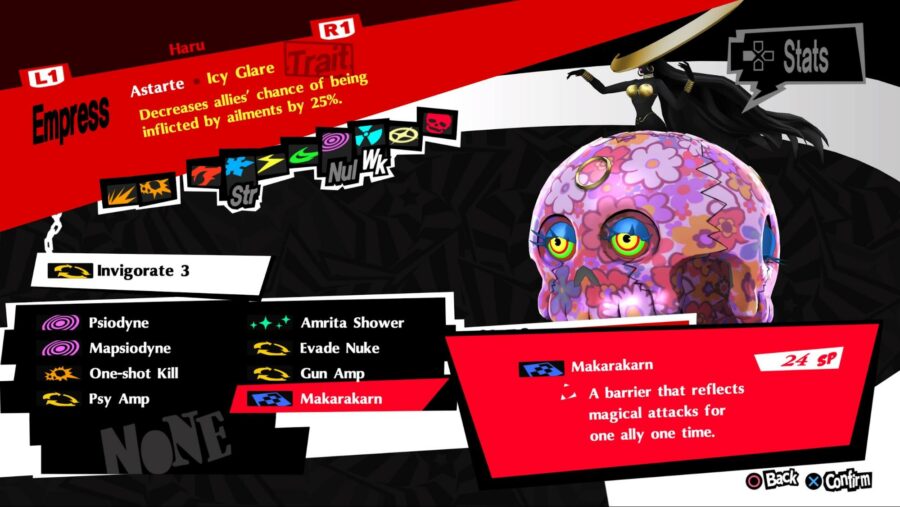 There is only one item or skill you really need to have in the bag to take on Persona 5 Royal’s Reaper and that’s something that repels any magic except Almighty. The skill Makarakarn does exactly this. It can be learned by Haru at level 44. If she has forgotten it, she can be sent to the confessional at the Chapel in Kanda (where you regularly meet Star Confidant, Hifumi). If Joker needs to summon a Persona that knows the spell, it is a default skill of Arahabaki, who can be found in Okumura’s Palace or Mementos. It is also a default skill of Scathach and Lilith, who need to be created by fusion. To see what you need to make these Personas, we recommend using the Persona 5 Royal Fusion Calculator created by chinhodato. 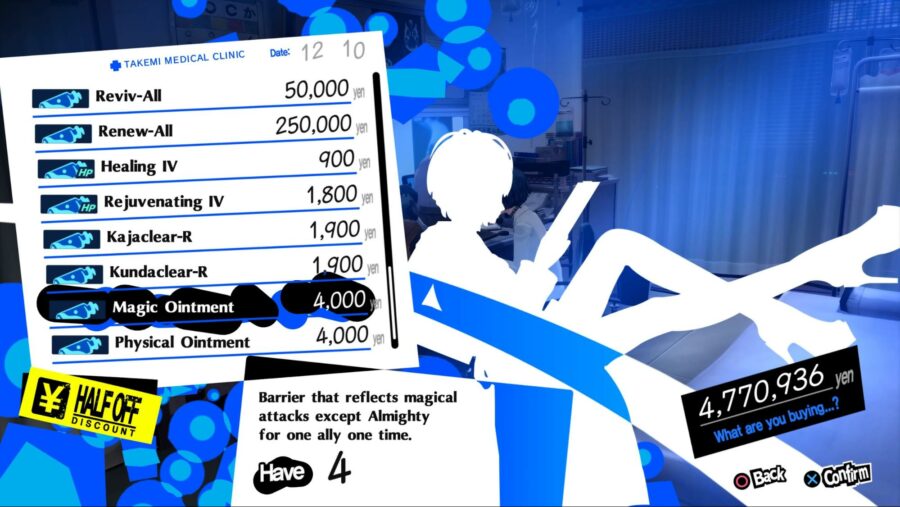 The even easier alternative is to have an item called Magic Ointment. It does the exact same thing as Makarakarn and can be used by anyone. The catch is that it is only regularly available from Takemi’s Clinic if you get the Death Confidant to Rank 10. If you manage to do so, they only cost 4,000 yen.

Finally, because you’ll need The Reaper to ambush you, a Persona that knows Thermopylae can be clutch for extra help. Thermopylae allows you to pump up everyone in the party’s ATK, DEF, and Accuracy/Evasion at once if you’re surrounded.

Once The Reaper ambushes you, it will pump itself up with Concentrate. Your first move should be to block the incoming charged attack. From there, use Thermopylae and heal up if needbe. At least one party member should cast Makarakarn or use the Magic Ointment. It does not matter who you choose to give the shield to.

Normally, The Reaper would attack the party with elemental skills that target specific weaknesses. However, with the Makarakarn/Magic Ointment shield up, it will get stuck in an indefinite loop of using Concentrate and then Megidolaeon, which deals Almighty damage to the whole party. This makes it incredibly easy to to attack it with everything you have after it uses Megidolaeon and then block after it uses Concentrate. Restore health and SP when needed, most likely with Morgana or items like Leblanc Coffee.

In addition to all the buffs you can give yourself, a new wrinkle in any Persona 5 Royal Reaper fight is that your Showtime finishers can become more frequently available. They usually activate when an enemy is near death, but they also can be prompted when your back is against the wall or in a tight spot, i.e. getting ambushed. These should allow you to do even more massive damage to The Reaper. This cycle, when paired with your ability to massively increase EXP gained in Mementos via Jose, can make the Persona 5 Royal Reaper prime farming and level grinding material.

Upon defeat, The Reaper will sometimes drop the Divine Pillar accessory, which halves all damage done to the wearer.