Persona 5 Royal: How to Defeat Okumura

A bad boss and an even worse boss fight, here’s everything you need to know about Persona 5 Royal’s most frustrating battle 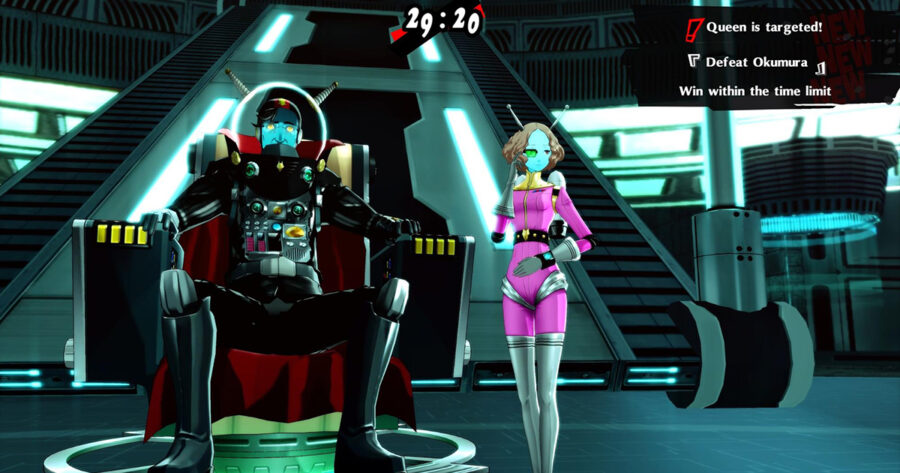 Persona 5 Royal is an updated version of the critically acclaimed Persona 5. One of the added bonuses of this definitive version of sorts is that virtually all the Palace Boss fights have been updated. The fifth Palace boss, Kunikazu Okumura, is easily the most frustrating of all these updated battles. In addition to having a 30-minute time limit in what amounts to a battle of attrition, the Big Bang Burger magnate has an additional condition to defeating the waves of worker robots he throws at you.

Players need to prepare big time for the fast food father and there are several ways to go about it. We have the guide to help you master the difficulty spike and defeat him, given you reach a level in the mid-40s before you face the corrupt businessman.

How to Prepare for Okumura 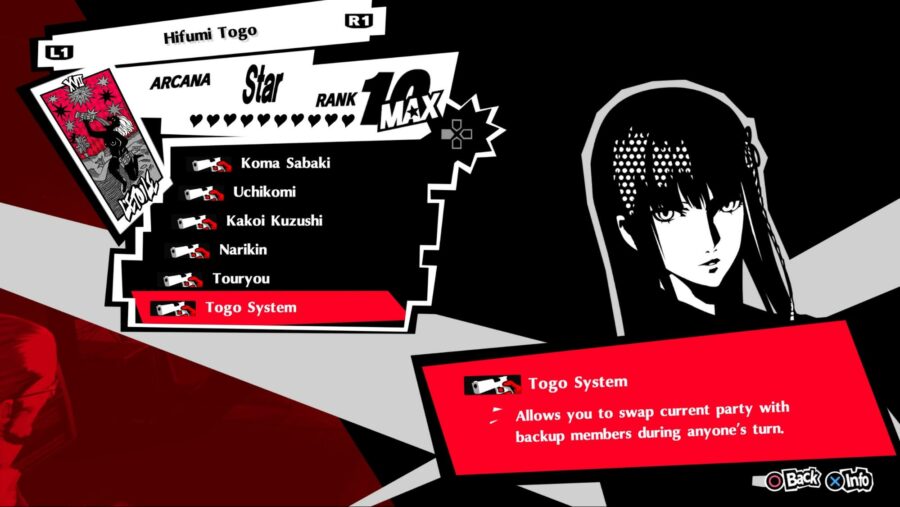 The Togo ability for maxing out Hifume’s Star Confidant makes this battle substantially easier. What it does is allow you to switch out members of the party on anyone’s turn. Every wave of enemies that Okumura throws at you has different sets of weaknesses, meaning you’ll need to swap out for efficiency’s sake. This is also key because All-Out Attacks are disabled for the entire fight, however, you may still use Baton Passes.

Dekaja is a skill that nullifies buffs for all enemies. This is crucial because Okumura will increase the defense of one member of each wave of his minions. The workers Okumura sends out for each wave must all be defeated at the same time. The raised defense of even one, then, will cause there to always be one left behind and force you to face that wave yet again. This maybe wouldn’t be so much of a problem if the battle didn’t have a timer. Ann learns Dekaja at Level 16, however if she is underleveled or you deleted the move, there is another relatively easy method to getting it.

During the Okumura saga, the Twin Wardens will ask to be taken to the Maid Cafe in Akihabara. You cannot take them there if you haven’t been there at least once yourself. If you can sit through the rather awkward scene, one of the Skill Cards the Twins will reward you with is Dekaja, which you can use to teach the skill to any of Joker’s Personas. Also, if you had Ann forget Dekaja, you can have her relearn it by going to the chapel in Kanda, where you regularly meet Hifume.

Dekunda is another useful skill for this fight because it nullifies debuffs for all allies. Okumura will lower your defenses at certain points in the battle, so using this can help if you somehow can’t get your hands on Dekaja. Amrita Drop heals all ailments for the entire party and is the final clutch skill to have handy. At certain points in battle, Okumura will attempt to inflict your entire party with Hunger. Haru will know it upon recruitment, so make sure she keeps it.

As previously mentioned, all enemies in each wave have to be killed at the same time or else Okumura will just summon them again. Some of them will get self-destruct orders after a couple of turns, meaning one of them will die, however they will not count as being defeated and the whole group will just show up again. This is infuriating thanks to the 30-minute time limit.

Because of this time limit, it may be wise to speed through any much of the dialogue that shows up during the fight, even if it is story and character relevant.

For quick reference, here are the weaknesses of each wave of enemies:

6th and 7th – No weaknesses 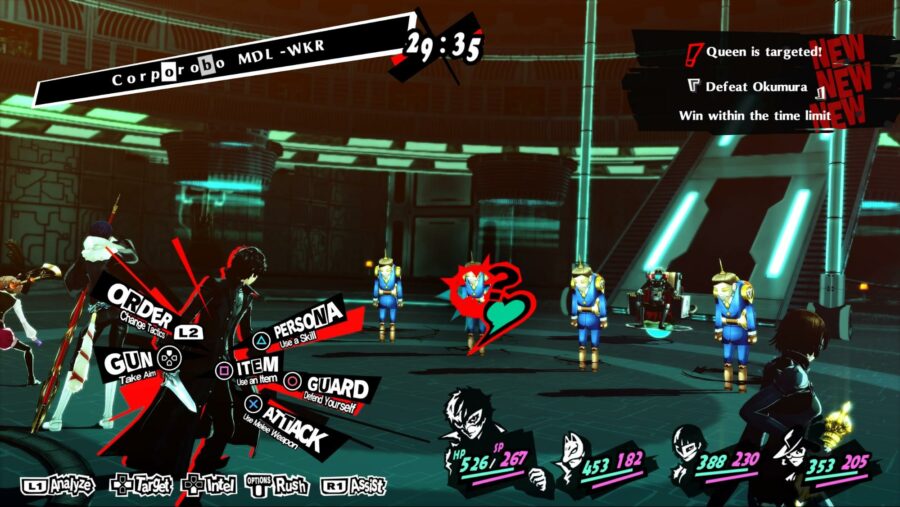 For the first wave, you can take them down rather easily by focusing on their weaknesses. Note that Okumura will target a random member of the party and focus all enemy attacks on them. Having Ann and Morgana on the team can make quick work of them, especially if Ann happens to inflict the Burn status on any of them and Morgana or Joker can follow up with even more Wind damage. 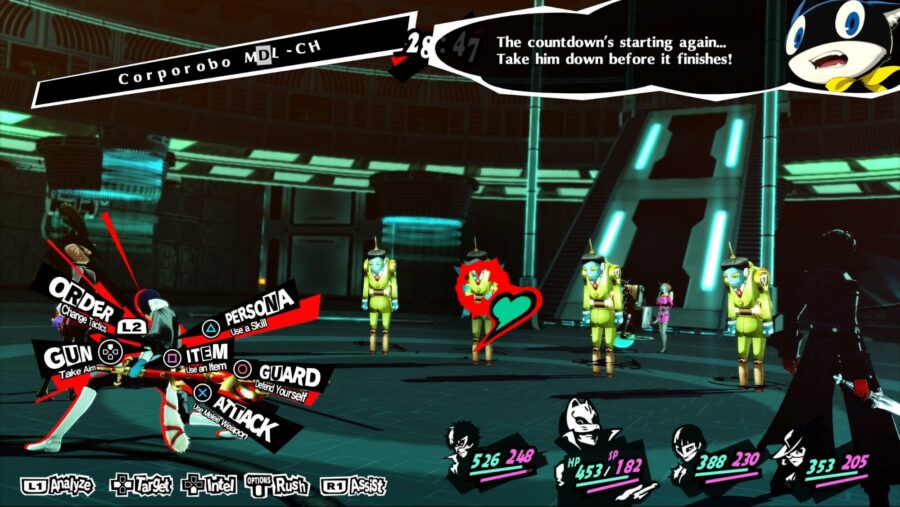 The second wave is where the real trouble begins. Okumura can now act twice in a row per turn. He will abuse this liberally by pumping up the defense on only one of his workers and lower your whole party’s defense. This is where Dekaja will come in handy. Haru and her Psy damage should be your biggest weapon here. 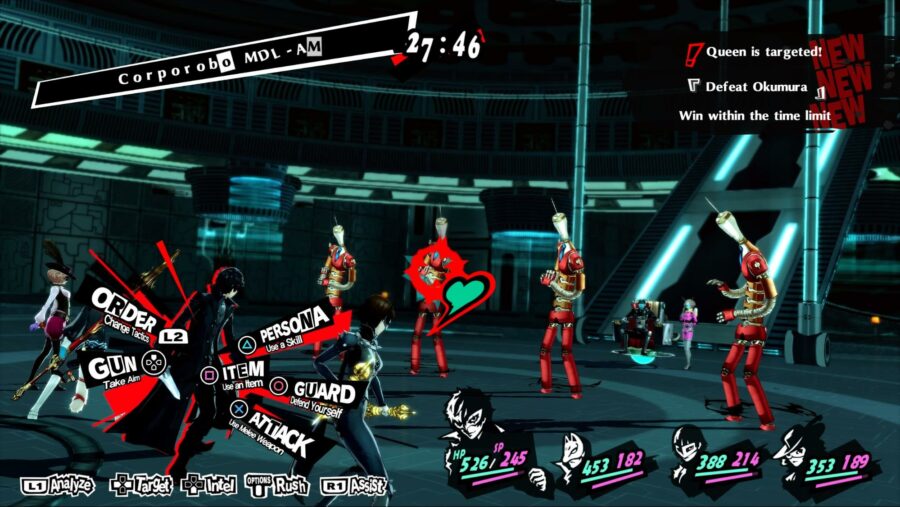 The third wave will begin the same as the previous one, so use Dekaja as soon as possible. This should be your method for every phase thereafter as well. Makoto works great here, moreso than Ryuji would, although he is also an option. It should note that this wave also has no resistances to Gun damage, so if need be, open fire or use a Gun skill for anyone who can’t deal super effective damage. 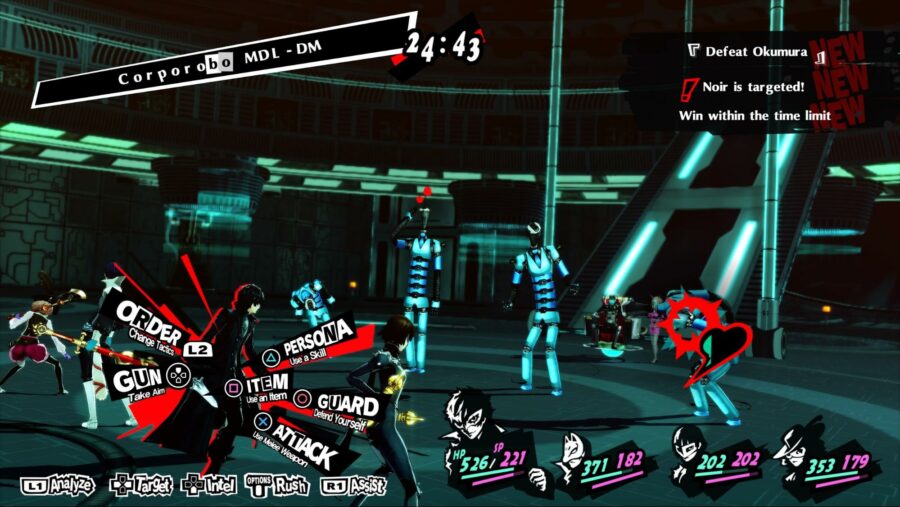 The fourth wave acts similarly, except this time being weak to Wind and Bless. Morgana works well here again. If Joker has a useful Persona that has Bless damage, feel free to bust it out. They again do not resist Gun damage, so use it as an alternative. Repeat this for the fifth wave, changing focus to Haru and her Psy damage. If Joker has a Curse using Persona, keep it as backup. 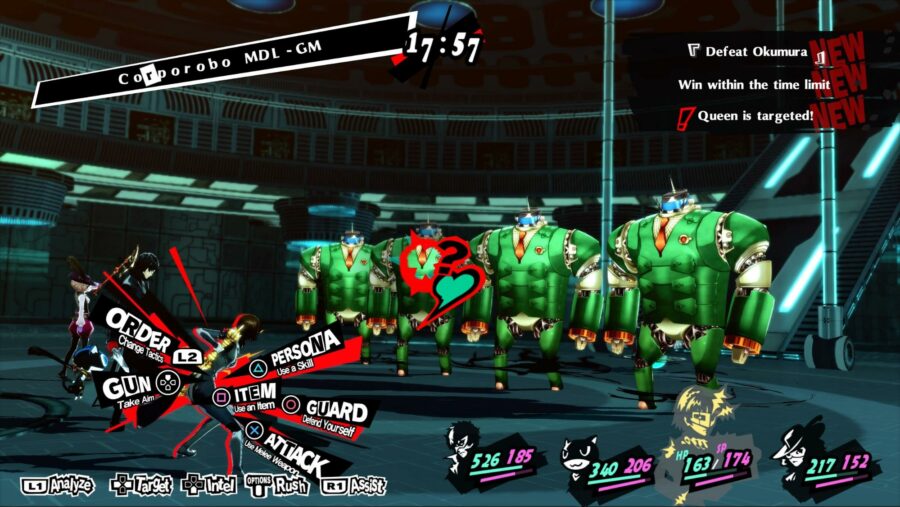 In the meantime, be wary of both your HP and SP. Use Morgana as your primary healer, especially when his Wind attacks won’t deal the most damage. SP gets drained quickly in this lengthy battle and items to recover them are rare. Be sure to have some Leblanc Coffee on hand or, better yet, the SP Adhesive 3 from Takemi’s clinic. The latter will restore 7 SP every single turn and is perhaps the most useful equip item in the game. 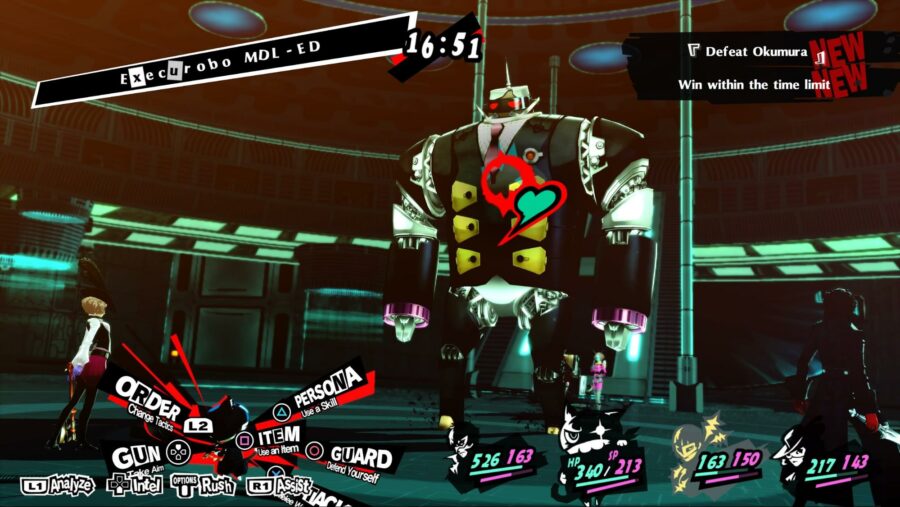 From the sixth wave forward, there are no more weaknesses or resistances on the enemies. A giant executive worker robot comes here and will thankfully take damage from everything. It does have a massive attack, though, in the form of Big Bang Challenge. The turn prior to using it, it will charge up with Big Bang Order. Big Bang Challenge deals heavy Almighty damage and inflicts Hunger on anyone it hits. Block when Big Bang Order is used and be prepared to use Amrita Drop or similar skills or items to keep your party fresh. 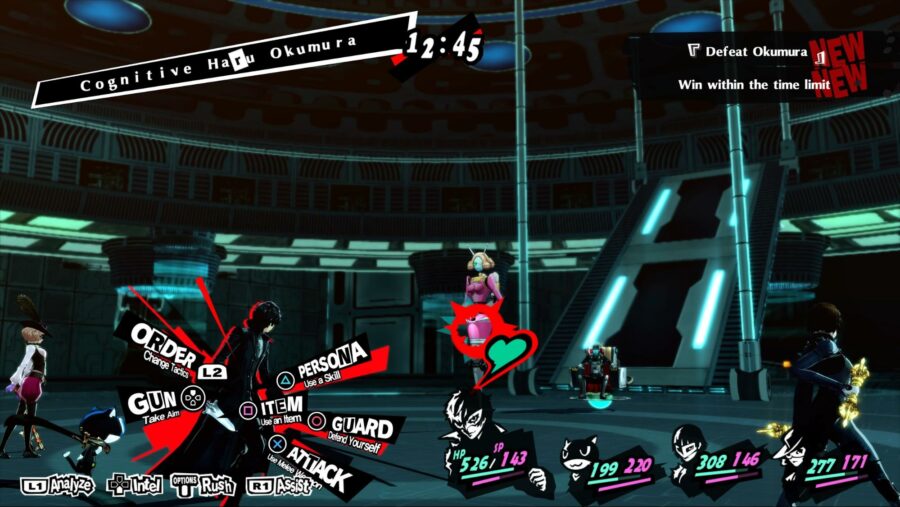 For the seventh and final waves, Okumura will send Cognitive Haru after you. If you’re low on SP, don’t worry about using too many skills. Once Haru is down to a certain amount of health or when a certain number of turns pass, Okumura will order his robot daughter to self-destruct. Unlike his workers, when Cognitive Haru self-destructs, the wave will end. You will want to block to avoid the heavy Almighty damage that will come when she blows up, however. Finally, Okumura himself is the final enemy. The abusive father and boss has virtually no defense, so it should only take a couple hits to finish him off. Enjoy his groveling and the story twist that follows. 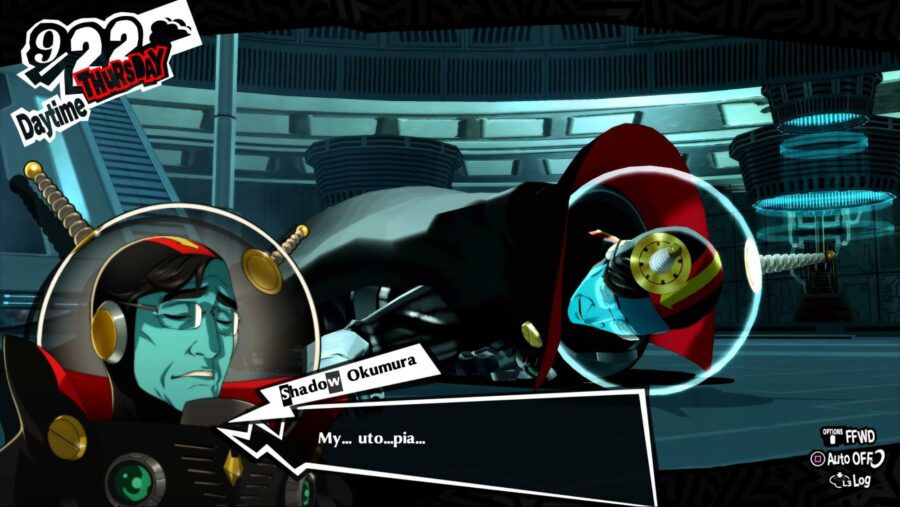