Your opponents will be in a bit of a pickle. 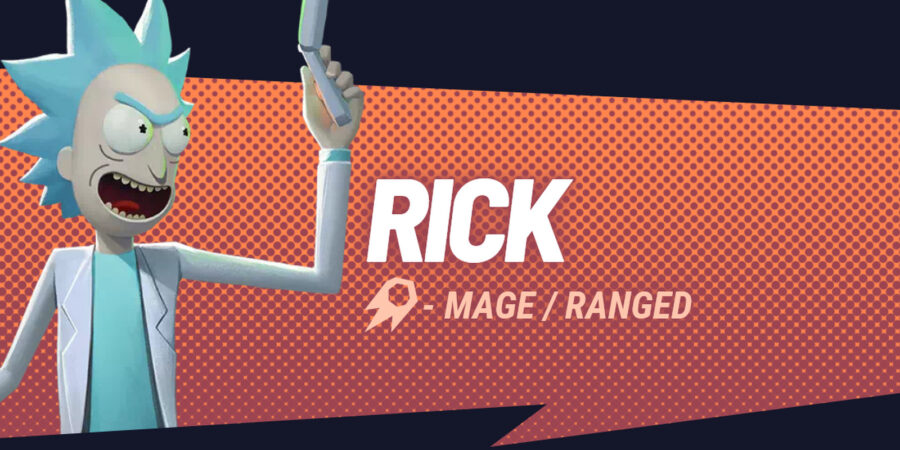 Rick Sanchez, the irreverent scientist, alcoholic, and war criminal, recently joined MultiVersus as a Mage-type character. That means his fighting style is based around throwing horrible things all over the screen. He’s listed as an Expert character. That ought to mean he takes a little more skill than other characters, but in this case it means he’s just stronger (and more expensive). Skilled players can use his abilities to cause a catastrophe of damaging effects. In this MultiVersus Rick Guide, I’ll explain how the madman gets the job done. 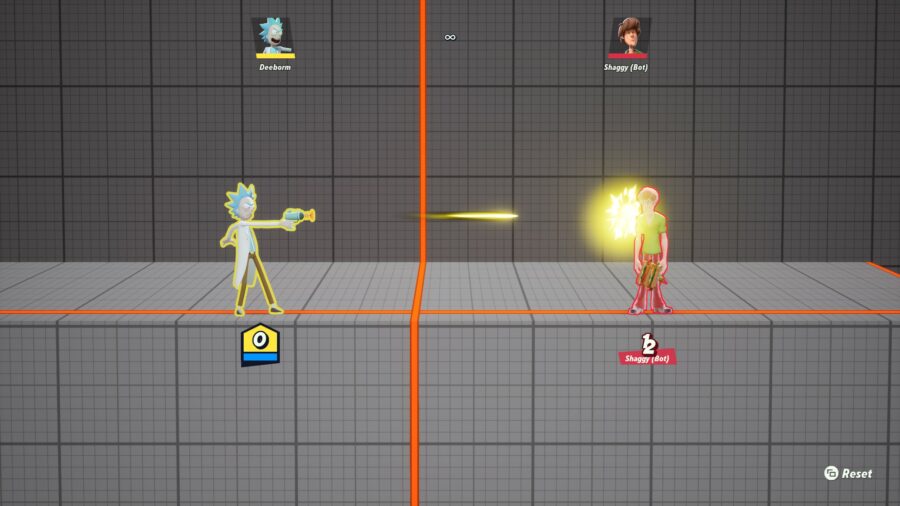 In the first section of this MultiVersus Rick guide, I’ll review Rick’s basic attacks. Even his simplest moves have some wild properties. 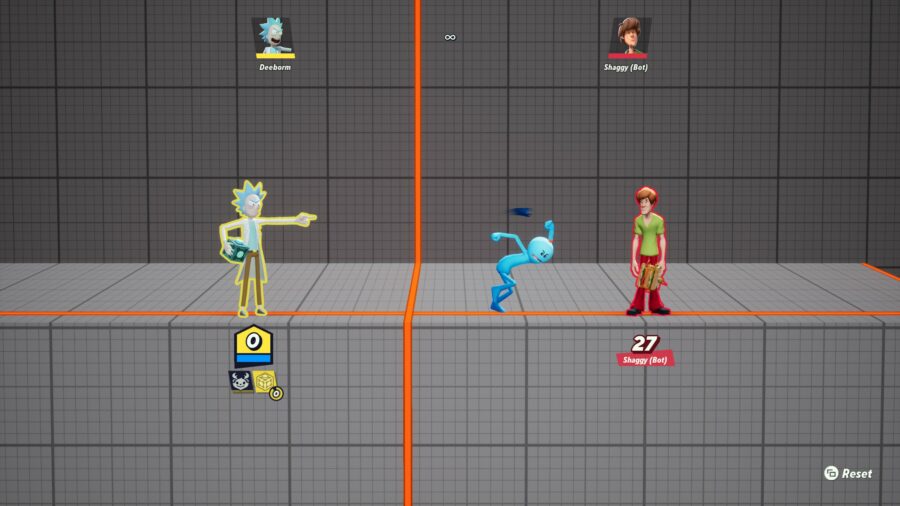 In this section of the MultiVersus Rick guide, I’ll review his special attacks. They’re even wackier than his normals (which are already pretty wacky).

How to Win Team Battles as Rick 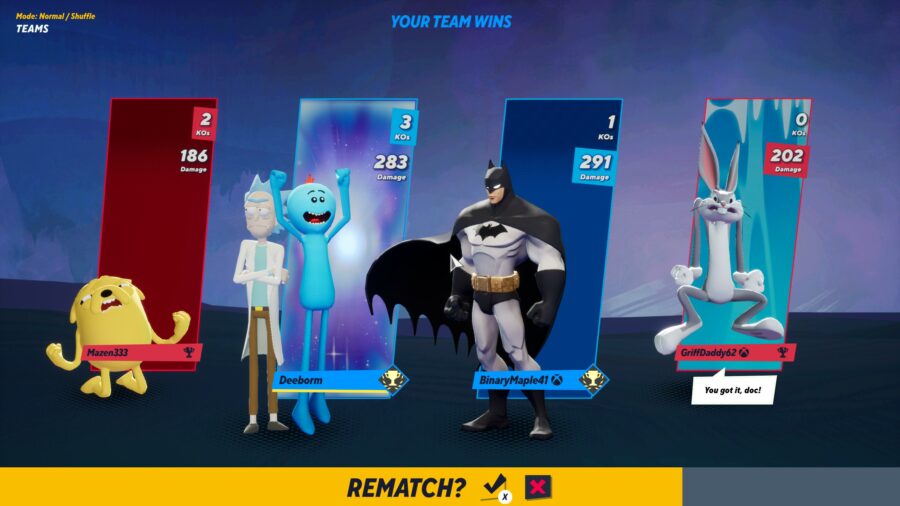 Here are some specific strategy tips. Between his Mega Seed, portal summons, and buff grenade, Rick makes a decent team player. His “Mage” classification, however, means he takes a little setup to reach his full potential. That also means it’s hard to coordinate his helpful effects without good communication. Imagine a randomly matched teammate jumping for you to put the Mega Seed in them! It’s just not going to happen.

Your role, then, is to be as annoying as possible by covering the screen in laser blasts and Meeseeks. If they’re engaged with your teammate, enemies won’t be able to evade. Don’t use too much of the weak laser – you want your foes flinching so they don’t hit your ally. When you see a vulnerable target, pursue and destroy with Rick’s deadly offstage abilities.

Rick is powerful, but prefers fighting at a distance when he can. His ideal teammate, then, is a frontline Brawler or Tank who can keep annoyed opponents from reaching you. Superman is a great option, with a high defense and kill potential to pair with Rick’s high damage, but lower kill potential. Cooldown-heavy characters like Taz or Wonder Woman are good allies as well, since you can help them out with Mega Seed.

How to Win 1v1 Battles as Rick 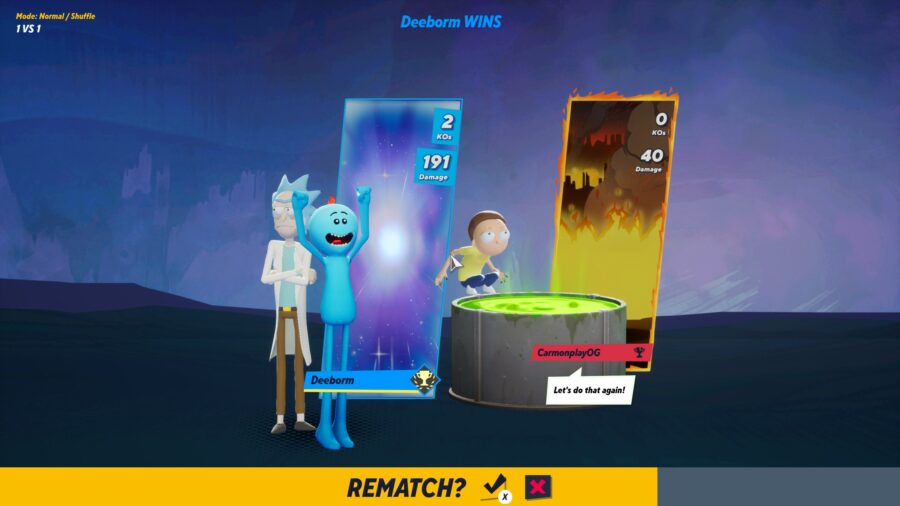 Rick has the tools to compete 1v1, but he has to be a little careful. Charged projectiles and complex setups don’t work when the enemy walks up and steps on your foot. Use quick attacks like Rick’s side air to start with, and anytime you have some room, start unloading your projectiles. Charging your laser midair works great here, and can catch enemies by surprise. Overall, you want to limit your enemy’s space with lingering effects, then punish while they try to avoid them. 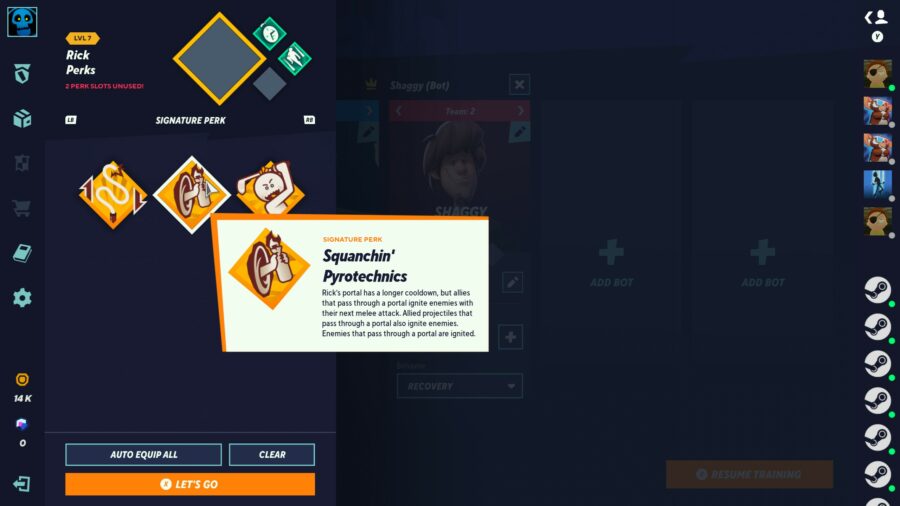 For the last section of the MultiVersus Rick guide, here are his perks. Rick has three Signature Perks, each one focusing on a different aspect of his playstyle.

Squanchin’ Pyrotechnics is for Ricks who like weird portal setups. You can use the fire portals to strengthen your laser blasts and other projectiles if they’re aligned right. Use them offensively by placing a portal, then knocking the enemy in for fire damage. Or just get a damage buff after using them for recovery. This adds a little extra utility to Rick’s portals, but as always, they won’t help at all if you blow the cooldown on a poor placement.

Bit of a Stickler Meeseeks is for Ricks who like to combo with Meeseeks. This doubles the damage of a Meeseeks that hits someone who’s already being hit. Since the Meeseeks often hit first, the most frequent way to take advantage of this perk is with the long windup golf club, like in the perk’s icon. Timing a combo between Rick and Meeseeks could be tough but extremely rewarding this way. The perk is also more useful in teams, since your ally can trigger the effect as well.

The simplest option is Squanchin’ Pyrotechnics for the fire buff after portal use, but Bit of a Stickler Meeseeks should do the most extra damage overall (in teams).

For secondary perks, cooldown should be priority thanks to the value of Meeseeks, portals, morph grenade, and even Mega Seed. Coffeezilla is earned early and is great to start with, but the best cooldown reduction is considered to be I Dodge You Dodge We Dodge. An alternative is I’ll Take That, which refunds cooldown against debuffed enemies, if you can secure a debuff from your ally or are using Ice To Beat You.

Projectile buffs make sense for Rick, especially Ice To Beat You as mentioned. That also includes Shirt Cannon Sniper, which increases the damage of long-range shots for extra obnoxious projectile spam. Finally, Rick’s low weight means he should take dodge buffs over damage resist buffs, meaning Fancy Footwork or Slippery Customer, which can also help him escape when the enemy finally reaches him.