Feeding Your Cult in Cult of the Lamb

Hunger is an early problem for new Cult of the Lamb players. Here are some tricks to break that fast… fast. 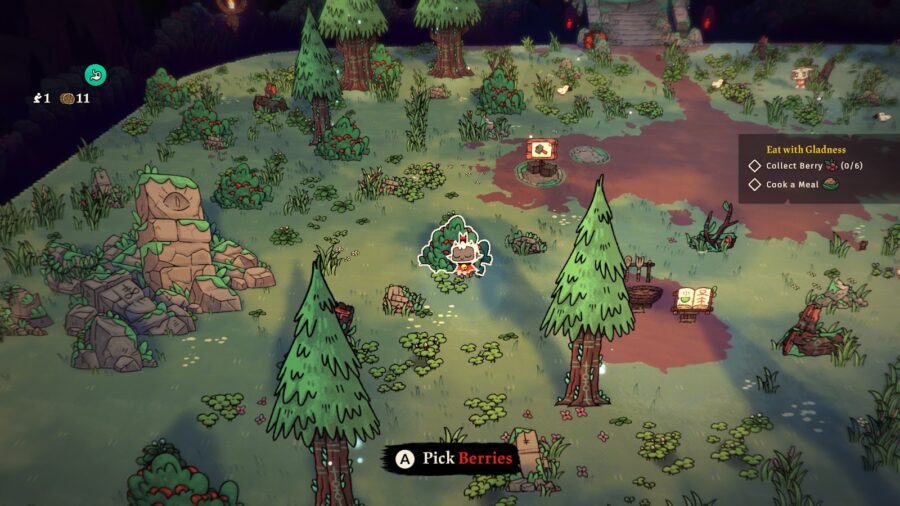 Cutesy cult manager Cult of the Lamb asks its players an important question: what would it be like if you constantly did terrible things to people who trust you? As it turns out, there are certain grievances no brainwashed follower can abide, such as starving to death. Cultists in-game have no way to feed themselves, meaning players have to prepare meals and, more crucially, maintain a stockpile of food. Feeding your cult is an early challenge for new players.

Luckily, the game includes a wide variety of resources to help provide food for your stupid, stupid followers. Here are some of the best.

Cult of the Lamb: Farming For (The Benefit Of) Dummies

The simplest way to feed your people is with a big enough farm. Farm buildings can and should be unlocked early, and added gradually as your cult grows. That’s not enough by itself, though, especially early on. Rushing to set up farmland while your cultists are starving is not going to work. Cultists won’t even harvest the crops they grow without a mid-tier unlock. You have to do it yourself for a while. Watch for a little star sign below a fully-grown plant to get the best return.

Fully established farms with all the bells and whistles are extremely powerful and nearly essential for late-game, which eventually requires the player to have twenty followers at once. It’s possible to fast-track farm development by focusing on farm building unlocks, and by opening late doors early. Later dungeons contain more nutritious crops, and even a short trip inside can net you a seed that can be endlessly re-used to feed your cult.

Forage Ahead in Cult of the Lamb

If you need food quickly in the early game, foraging is your best option. Simply choose dungeon routes that lead through the food symbol (or through the house symbol with a food symbol below it). There’s a little risk involved, though. In order to return with the grub, you have to beat the boss at the end of the route. Dying and respawning at the cult is also an option, but that makes you drop some loot and comes with a faith penalty.

Progressing too quickly can also be trouble. The Bishops will appear during your crusades and curse your followers. Heket, the second, can drop a truly nasty mass starvation on your whole cult, which is not ideal if you set out to gather food.

A better reason to push ahead in the action sections is to unlock extra locations. Progressing through the first zone, Darkwood, will unlock Pilgrim’s Path. That’s the best spot for takeout: you can freely fish there! Fish are more filling than early game crops. Plus, catching all four types of special fish unlocks a new fleece, and the ability to buy from the local fisherman. If you’ve been extorting your followers, this is an easy way to convert gold to food.

Expert Mode: Not Feeding Your Cult

If you just can’t shake the hunger, the strongest countermeasure is the Sustenance branch of the Doctrine choices. It might not sound as dramatic as Afterlife or Law & Order, but putting your first couple of Doctrines into humble Sustenance gives you the tools to fight hunger without much trouble.

The first is a choice between cannibalism and grass-eating. Cannibalism sounds fun, but it’s most useful as a special treat to boost your cult’s mood. There’s usually not enough murder for cultist meat to be a reliable dinner. Grass, on the other hand, is as common as you’d expect (and in-character for a religion founded by a sheep). Being able to freely eat grass is an excellent stopgap.

The second Sustenance Doctrine choice is a big one: A ritual of either feasting, or fasting. Rituals are powerful cooldown abilities consuming the bones of one’s enemies. The feasting ritual is a good panic button for a hungry cult, since it restores all hunger completely without actually consuming any food.

Paradoxically, however, the Ritual of Fasting is the strongest hunger-meter effect in the whole game. It completely shuts down the need to eat for three in-game days. It’s perfect to use before a foraging crusade, removing the need for babysitting. Plus, low-quality foods can cause filth and disease, so cultists who don’t eat are a little cleaner than normal. The ritual even prevents Heket’s mass famine from causing harm! Fasting does tend to make your cultists a little unhappy, but the benefits far outweigh the costs – just be aware it keeps you from feeding your followers anything at all for those three days, including mood-boosting cultist meat.

Feeding Your Cult: In Summary

There are a few extra techniques that can help feed your cult. Release your inner Animal Crossing and catch the spiders that appear at night: they convert into morsels of meat. Forage for berries in unlocked areas when they’re available. If you’ve already researched the farm, unlock a missionary as well, and send your people on a quest for meat. If they don’t survive the trip, at least that’s one less mouth to feed.

The most important Cult of the Lamb hunger staving technique, however, is a lesson taught in similar-themed games such as Darkest Dungeon: your cultists don’t matter very much. Let ’em starve to death a little. It’s no big deal. Your buildings and unlocks are what matter most, and they’re permanent. Followers are cheap, sometimes literally discounted for quick sale. As The One Who Waits will tell you, the cult is your tool; be careful not to become a tool of your cult.