Tearer’s Somnium is one of the trickier parts of nirvanA Initiative. Here’s how to crack it. 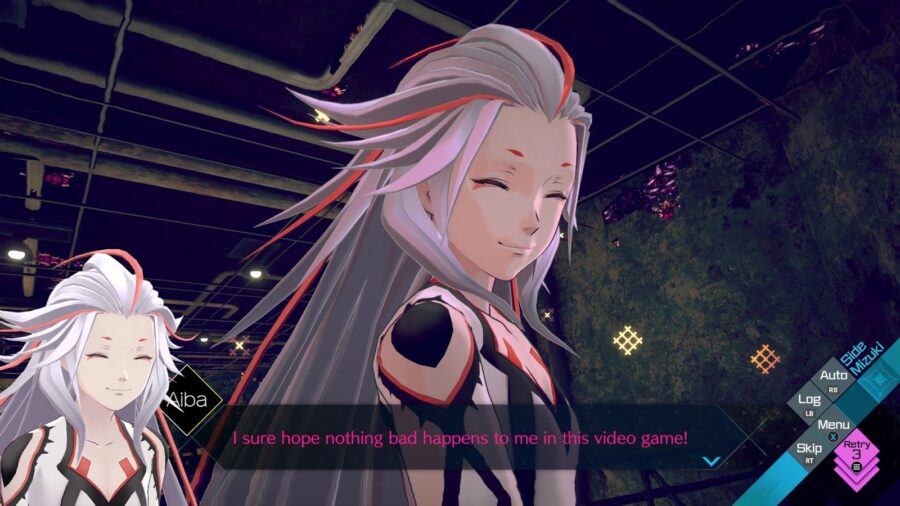 AI: The Somnium Files is an interesting mix of anime murder mystery and psychological dream maze. It was successful enough to get a sequel: nirvanA Initiative, which is not a typo. The A and I are deliberately capitalized because that spells “AI”, referring to artificial intelligence and also a Romanized spelling of the Japanese word for “love”. It’s all very meaningful, I assure you. The protagonists, members of Special Investigation Team ABIS, are police officers who look for evidence inside suspects’ dreams. It’s extremely invasive (and probably a human rights violation), but more importantly it lets the player explore a bunch of Psychonauts-style mental worlds. The goal in each mind is generally to reach the end of the maze, where an important clue is hidden. That’s where the need to clear Tearer’s somnium comes in.

One of the sequel’s dream worlds, or “somnia”, is even wackier than the others: the imagined reality of the game’s antagonist, Tearer (pronounced “terror” of course). His dream takes the form of a series of escape rooms, reminiscent of lead developer Kotaro Uchikoshi’s famous Zero Escape series. It’s a nice throwback for fans, but players who only signed on for comfy anime reading might have a bad time. Here’s how to clear Tearer’s somnium and get back to the plot.

This room starts with some simple math problems. There are four equations on the wall, and a numbers-to-letters chart on the ground. Using the chart, replace the letters with the appropriate numbers and solve the equations. You have to show your work, too: the room doesn’t progress unless you type your answers into the walls. It helps a lot to take notes in this somnium, since the game doesn’t always record important numbers for you.

The next stage is trickier, asking the player to use the numbers from the equations to form words. You might think to convert the numbers back to letters using the chart, but that’s not the answer. Instead, the solution is to rotate the numbers according to their matching symbols’ facing until they look like letters. A “3” rotated counterclockwise, for example, becomes “m”, and spells out “mom”.

This obstacle on the path of clearing Tearer’s somnium is more of a spatial puzzle than a mathematical one. The objective is to look through three different lenses to see the numbers making up the password, but the room is filled with illusory walls. Walking through a wall makes it disappear, and walking through the space a wall used to be causes it to return. The goal is to remove all the walls between each lens and its corresponding focus.

It’s easy to stumble around and mess up the walls. The simplest way to progress is one at a time: clear the view in front of one lens, look through it to learn its secret number, then clear the next. This way, you can use the rest of the room to reposition yourself. After finding the first number, the game adds a hazard in the form of a big evil ball that drains your time limit. Don’t panic, though: it follows a predictable path, and when you hold still, your time runs out 100 times slower. Just let it pass.

A series of three puzzles. In each one, the answer is a set of directional arrows. The first is simple, if obtuse: clocks appear on the walls, and the placement of each of their hands forms the shape of an arrow. Copying these arrows is the first answer. After that, another evil ball appears, and this one tracks the player. The only defense is to outrun it. The ball is very slow, but moving cuts deeply into your remaining time. Keep an eye on the clock while you dodge.

The second puzzle is just the word “MOTH”. Each letter is meant to represent a different directional arrow, but there are no other clues. The trick is to consult the chart from the first room, which the player still has. The second trick is that you don’t use the chart to convert the letters to numbers. Instead, the answer is to compare the physical positions of those four letters on the chart, like a compass rose. Fortunately, after that nasty riddle, the third puzzle is just a code to enter: up right up left right.

Once all three rooms are finished, only two puzzles stand between you and clearing the somnium: math problems, using the values of the passwords from each room. The first is to multiply the three passwords together. That’s 215 x 229 x 999 = 49185765, broken into four double-digit numbers and converted using the chart (which the game kindly forced you to remember in the last room) into the word LOVE. The second is to reverse them (because the equation is depicted mirrored), and add them together. 512 + 922 + 999 = 2433, which can be converted into a three-letter word. Entering this word ends the somnium in victory.

This mental maze is a cool look at the puzzle-filled psyche of an Uchikoshi villain, but its escape room nature is a radical departure from the others. Perhaps anticipating player anger, the devs included a couple of extra tricks to clear Tearer’s somnium more easily. Repeatedly entering a password incorrectly will eventually prompt your helper Aiba to magically know the answer, automatically progressing at the cost of a chunk of time. If all else fails, you can cheat: entering the passwords (listed in the paragraph above) early completes each room instantly. The characters will mention how strange it is to know the password, but they’ll get over it.