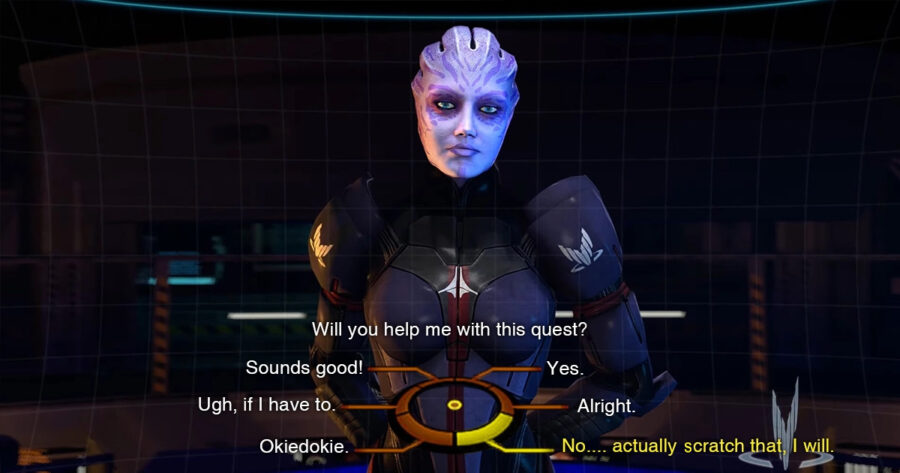 EDMONTON, Alberta — Developer Bioware has announced that their latest Mass Effect game will be the deepest dive into moral dilemmas yet, featuring more ways to say yes than any game previously released in the franchise.

“Rather than making entirely divergent storylines, we wanted to add weight to the narrative that was already present.” said BioWare Story Editor Ryan Cormier. “For example, when Shepard is asked to dance, you can respond with options like ‘Yes please,’ ‘I suppose I could dance,’ and ‘me gusta bailar.’ It’s impossible for Shepard to avoid dancing in this scenario.”

Cormier and others claim that each variation on the same answer shows a different side of Shepard.”

This is but one example that was provided of the many different ways that the same affirmative response could effect in game relationships.

“At one point, Shepard is asked if he dislikes a squadmate,” McCord continued. “In the current build, Shepard has to respond ‘Yes.’ However, the player can add a lengthy tail to it, creating more of a ‘Yeeeesss?.’ This implies Shepard might’ve formed his opinion from peer pressure rather than actual disdain, and is grappling with the ramifications of that behavior in this moment.”

“By giving my Shepard dozens of technically identical answers, it really put my actions into perspective ,” exclaimed game tester Ted Schwartz. “I was torn at one point. It was so hard to decide if I wanted my Shepard to say ‘I’d love to do a genocide’ or ‘Yeah, I guess genocide seems like the way to go here.’ Of course I chose the latter. My Shepard knows that it’s needed, but he’s not having fun with it.”

BioWare has yet to announce a release date for the title, but has confirmed that it will agree with any and all cross promotional campaigns it is pitched to promote the game.