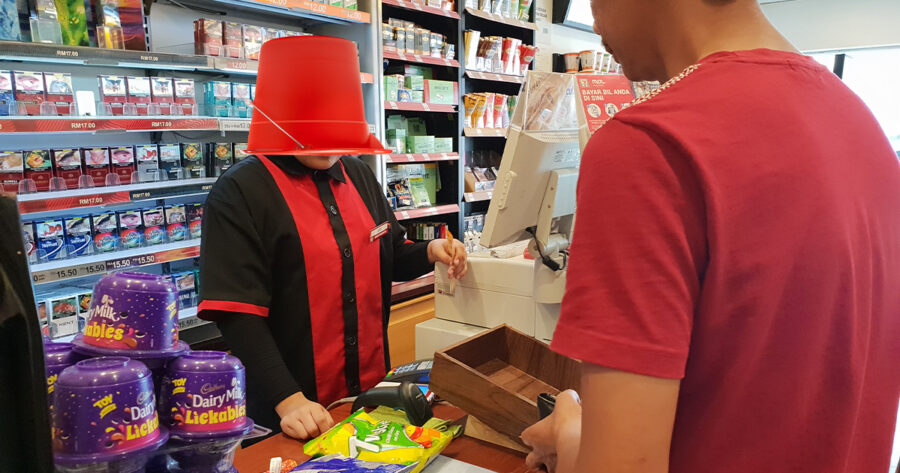 BAKERSFIELD, Calif. — Local gamer Shayna Wallis reportedly looted a 7-Eleven after placing a large bucket on the cashier’s head and just taking everything, according to police reports.

“I learned it from watching one of those Video Games In Real Life meme videos, but I didn’t know that you could do a Video Game In Real Life meme in real life,” Wallis said. “I just put the bucket on his head and he stood there completely still, he barely made any attempt at trying to stop me. Hell, I didn’t even have to crouch! I just took whatever I could grab in my heads and hold in my shirt and got the hell out of there. Then I went home and played Skyrim because, I dunno, it just felt right. Plus, I have like ten copies of it.”

According to those familiar with the situation, the 7-Eleven cashier, Theresa Clifford, 17, was actually aware of what was happening.

“She thought she was doing some video game thing. Whatever. I don’t even get paid minimum wage, I’m not gonna do shit,” Clifford explained. “The bucket on my head was actually perfect because now I can tell my boss that I couldn’t see what happened and there is absolutely nothing they can do to say I’m lying. I didn’t see fucking shit, I was in a damn bucket. I used to do this kind of thing in video games all the time and I was always thought it was stupid, but now I fully understand. The cashier isn’t a moron, he just doesn’t give a fuck and doesn’t want his boss to know he could have stopped it.”

At press time, Wallis was arrested because 7-Elevens have cameras. When asked to comment, she said, “Gamers are truly the most oppressed people on Earth.”