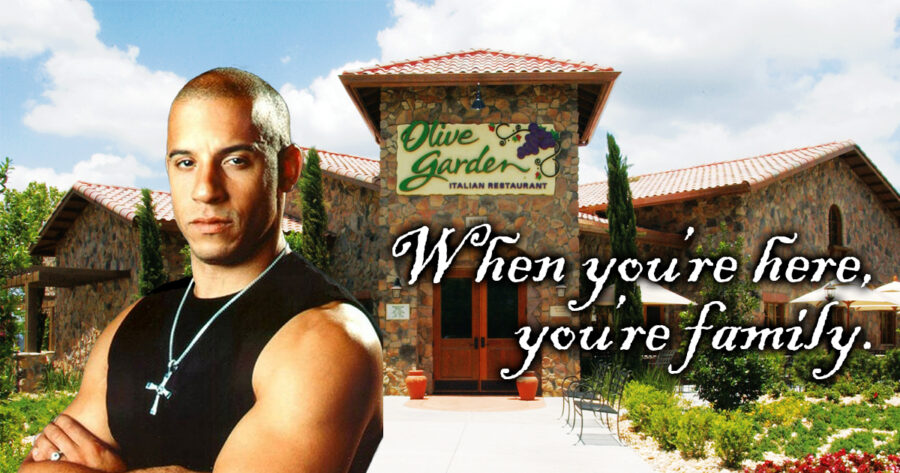 LOS ANGELES — Restaurant chain Olive Garden has teamed up with the Fast & Furious franchise to promote the importance of “family” as a concept.

“When yew here, ya family,” Vin Diesel says in one of the several promotional videos, walking into frame holding a bottle of Corona beer in one hand and a bunch of loose fettuccine alfredo in the other. “There’s nothin more important than sittin ‘round the table and breakin bread with your crew, your family. That’s why me and my drivurs always come to Olive Garden after we save the world… because when yew’re family? Yaw’re family. And that’s what a family does. They be one.”

The series of advertisements was a colossal hit with fans of the restaurant chain and film franchise.

“As someone who thinks that the Fast 9 trailer should win Best Short Film at the 2020 Oscars, I’m more than willing to watch the Fast cast just kinda mill about in an Olive Garden,” said @2Frank2Furious. “I want to know what these guys are up to in their spare time. I want a Truman Show style television show about the life of Dominic Torreto and his friends. The message of these films is so important to me, because I’ve never had a family of my own. Dom, Brian, Letty, Roman, etc… they’re my chosen family. I was brought to tears seeing Han, safe and alive, wolf down a bowl of shrimp scampi.”

“My favorite part of the Olive Garden videos was seeing the mean restaurant manager who wouldn’t let Dom bring in his own burgers that he cooked at home,” said @FastAndFuriousPresentsChris. “I’m pretty sure he was supposed to be a cousin of the Shaws or something. And if I know anything about the Fast & Furious franchise, he’ll end up being in the crew by the 10th movie.”

At press time, due to disagreements with the cast, Dwayne “The Rock” Johnson announced he was working on a series of videos himself, titled Olive Garden Presents: Hobbes and Bread Stick.