Even Conspiracy Theorist Kinda Surprised How Right He’s Been Lately 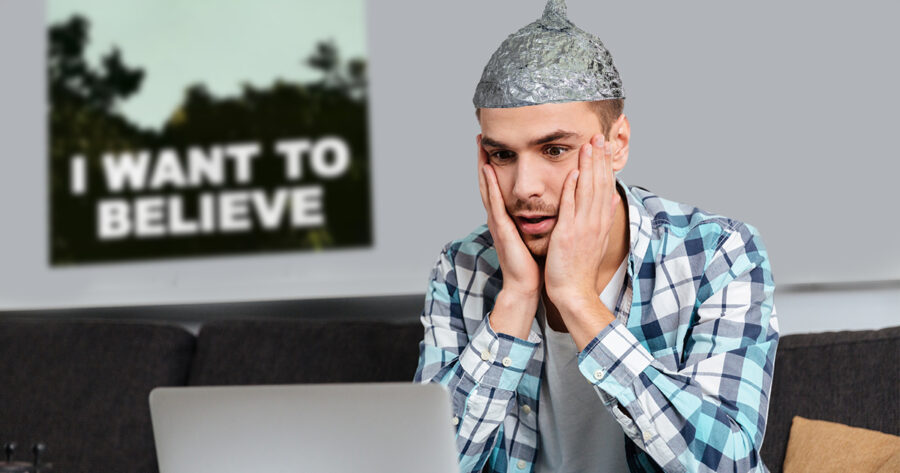 LAS VEGAS — Conspiracy theorist Andrew Hawkins has recently been taken aback by how much he has gotten right in the last few years, according to familiar sources.

“Look, I’m a conspiracy theorist — I believe some pretty wacky stuff — but I don’t expect it all to actually, you know, be true. I just like to believe shit! So when I started hearing all this stuff about Jeffrey Epstein, the JFK assassination, foreign coups, I was like whoa! I was just throwing darts at the crazy idea dart board, I didn’t expect to hit all bullseyes,” Hawkins explained, deepening his voice to avoid detection from potential lizard people. “Man, even the New York Times is running articles about UFOs this year. It’s freaking me out!”

Hawkins’ long time ex-girlfriend, Jane Holland, who left him years ago due to his increasingly troubling beliefs, felt that she needed to reach out to him in response to recent news.

“I called him because I wanted to apologize about criticizing him all those years ago when he said the U.S. government hired Nazi scientists after World War 2 — I had never heard of Operation Paperclip,” Holland said. “But he was pissed off, because it turns out, neither had he! He felt that it was it just some cool thing he read on an ugly website, not something you could read in a book. It was a really awkward conversation and at least thankfully reinforced that I was right to break up with him.”

But the extent of Hawkins’ prowess as a conspiracy theorist is not even known to him. A representative from the CIA who wished to remain anonymous, but also asked if they could be called “Deep Throat 2,” reached out to us to reveal some information that they had on Hawkins.

“I straight up got nervous when I saw some of the stuff he had on his Twitter about how all dogs have microphones in them because I was like, hold on, how does he know that?” Deep Throat 2 said. “So I’ve been following him for about a year and it turns out the guy was just totally guessing! He just has a good eye for it, I guess, because there’s probably seven or eight things that will come out in twenty years that will blow his mind when he sees he nailed it.”

At press time, Hawkins, freaked out about his recent discoveries, vowed to have only the most normal and verified opinions possible, sourcing them from only from the most legitimate sources: YouTube videos of guys yelling in their trucks.

You a conspiracy theorist? We have a fun one for ya. Check out the pilot episode of Alpha Betas, a world where the CIA hires a top secret team of gamers! This article is sponsored by Alpha Betas.