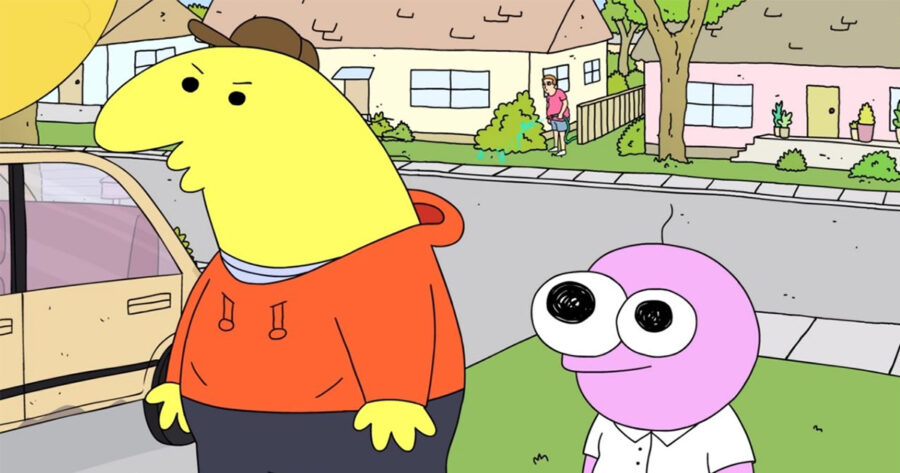 ATLANTA — Season one of Adult Swim’s new comedy show Smiling Friends has released in its entirety on both Adult Swim’s website, as well as on YouTube in various 15-second clips uploaded by random users.

“The original plan was to have two episodes come out each week throughout January, but I’m really happy that we were able to get the whole thing out all at once, and across two streaming platforms,” said the show’s co-creator Zach Hadel. “As someone who got his start on YouTube, it’s really great that people can experience the show that way, by having each bit individually recommended to them in 10 to 15 second clips. When I first envisioned Smiling Friends, I hoped that people would watch the whole thing out of order, sometimes in cell phone recordings of some guy’s computer monitor. That’s television in the modern age, I think.”

“Also I think you can watch it on Hulu,” Hadel added, “if you’re some kind of fucking weirdo.”

Fans of the series have praised Adult Swim’s rollout choice.

“Thematically, Smiling Friends is a show about chaos, so it’s fitting that I’ve seen probably about two thirds of it as YouTube clips of the little green guy yelling. Or at least I think I’ve seen two thirds, because I have literally no way of knowing how long it is,” said fan Arvin Senior. “I could watch it on the website, but I don’t want to. I want to watch it based on what YouTube recommends to me and I want to tweet at Adult Swim begging them to put the show on HBO Max so I can eventually watch it there. That’s part of the Smiling Friends experience to me and I wouldn’t trade it for the world.”

“Why wouldn’t I trust the YouTube algorithm?” Senior continued. “Is there anybody who knows me better? I have to imagine I’d like watching Smiling Friends better in this order than whatever order the nerds at Adult Swim put it in.”

At press time, Adult Swim announced that Smiling Friends would soon be released as physical media via flash drives, each containing four random one-minute clips of the show, scattered randomly across cities in the United States.