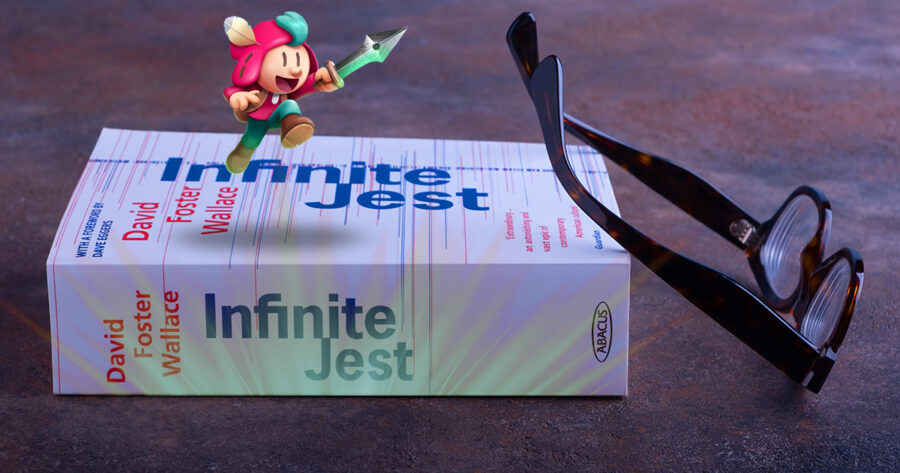 BEDROOM — Jot, also known as The Plucky Squire, a boy from a picture book who has the ability to jump into various 2D and 3D environments like drawings and mugs, has reportedly become insufferable after jumping into the book ‘Infinite Jest’ by David Foster Wallace, according to those familiar with the situation.

“I thought Jot was really cool when I met him. He was really well-traveled and had a lot of interesting perspectives. But ever since he jumped into ‘Infinite Jest’ and traveled through its story, battling its various characters and pretending to understand its various plots, he has been a real dick,” said a local Chess rook living on the bedroom desk where Jot jumped out of a picture book and began his three-dimensional adventure.

“He just keeps rolling his eyes every time he tries to explain something to me now, like he’s better than me. You’re not better than me just because you jumped into the story of ‘Infinite Jest!’ Stop rolling your black-lines-for-eyes at me!” the rook continued. “I’m not stupid just because I can’t jump into David Foster Wallace novels. I’m a pretty smart guy. I’m from Chess, ever heard of it? One of the oldest games, by the way. Show a little respect.”

Despite allegations, Jot, the Plucky Squire, has defended his change in perspective following his adventures within ‘Infinite Jest.’

“People just don’t get it. I’m not saying I’m better than anyone. Smarter maybe, sure, but intelligence is a poor qualifier for comparisons between people anyway. Not that I expect some Chess piece to understand that,” said Jot. “What people don’t get is that ‘Infinite Jest’ is actually about society and the way it functions. And as someone who has the ability to adventure through various 2D and 3D realms, jetpacking across a desk or punching out monsters in a game, I have a better understanding of society than anyone in this bedroom.”

Maybe if certain rooks didn’t live on a simple grid, looking at everything in black and white, they’d understand that,” Jot added. “But they can’t, can they?”

At press time, various members of Jot’s friend group had reportedly dropped him as a friend after the Plucky Squire jumped into a print-out of some Reddit threads.

Don’t worry, the concept of a character jumping into Infinite Jest and living out its story is purely satirical, but that doesn’t mean the idea behind a Plucky Squire has to be! That’s right: this is sponsored by Devolver Digital! You should absolutely wishlist The Plucky Squire on Steam because it looks super inventive and fun. Not insufferable at all, really!