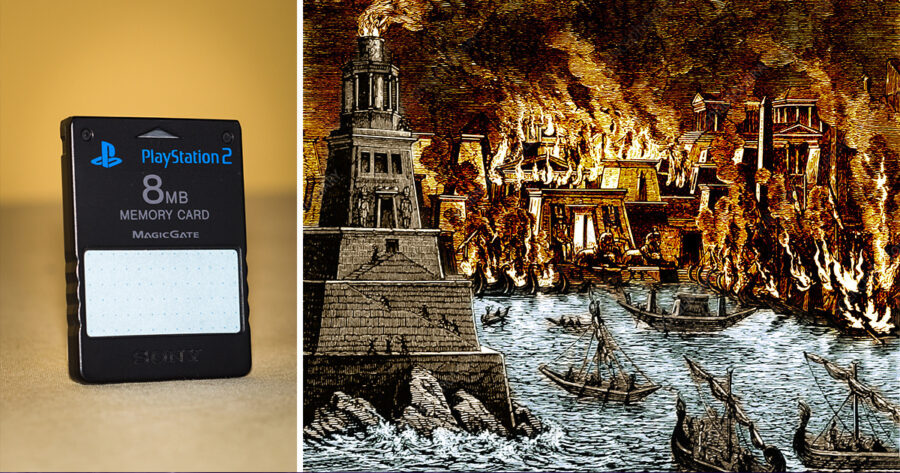 AKRON, Ohio — Local gamer Scott Landis’s languish was felt throughout the apartment upon his discovery that his PlayStation 2 memory card from 2003 had been corrupted, causing a destruction of information which drew immediate comparison to the burning of the Library of Alexandria by Julius Caesar in 48 BC.

“This is an absolutely devastating loss,” said historian and roommate Brett Carson. “The time, effort, and energy Scott spent completing every challenge in God of War alone would make Archimedes’ Screw look like a child’s thing. The scholastic community mourns with Mr. Landis.”

This was not the first time such a trove of knowledge had been destroyed at the hands of Scott Landis, according to his younger cousin Jeremy Stevens.

“Scott had me come over to play Super Mario World on his Raspberry Pi, but I accidentally erased over his 100% save file,” Stevens said solemnly. “I didn’t think it was such a big deal, but he compared it to the burning of Notre Dame’s cathedral. He’s always overreacting with things like that, but when he deletes all of the files on my computer to make room for more Sim City 2000 save files, it’s for ‘The Greater Good.’”

Those familiar with the situation say Landis has already begun playing through his games again to recreate the contents of his memory card and preserve his achievements for generations to come, although much has been lost to time.

At press time, Landis had confirmed that he would be skipping Final Fantasy X this time around because “the Thunder Plains fucking suck.”