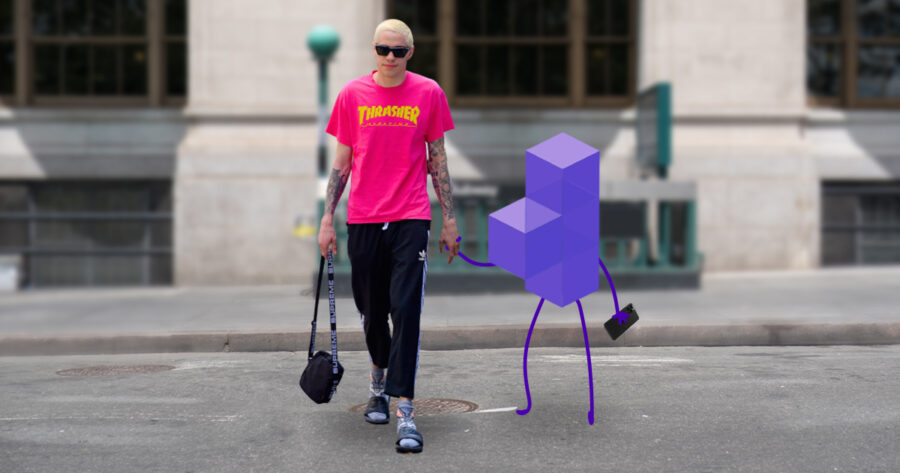 Uh oh! Famously large-dicked bachelor Pete Davidson is tied up with another well known hottie according to some steamy photos of him and the T-Shaped Tetromino from the iconic video game Tetris leaving a popular nightclub in New York City after an SNL afterparty.

According to those close to the situation, the T-Shaped Tetromino became friends with musician Taylor Swift after Swift provided unused vocals for the Tetris Effect soundtrack in 2018 and came to SNL on Saturday night to support Swift as the musical guest. There, she and Pete met for the first time and didn’t separate all the way into the after party!

“I’ve always been a huge fan of Tetris, that game fuckin rules, man. And I’d love to meet the T-Shaped Tetromino, she’s fucking… I shouldn’t even say this, but she’s so hot in those games, bro,” Davidson said on a podcast in early 2020. “I used to play Tetris all the time when I was a kid. The imagery of falling towers is so hard for me, that it gives me a sense of control to be able to build them back up. I got, like, depression and shit.”

The budding relationship between the two stars has lit up social media, as well.

“I will never forgive Pete Davidson for what he did to Ariana,” said a commenter on Instagram.

“Pete seems like the kinda guy who is into being pegged. I bet he lets her T-Spin into his asshole,” said another on Twitter.

“PETE DAVIDSON IS 27 YEARS OLD. T-SHAPED TETROMINO IS 37 YEARS OLD. THIS RELATIONSHIP HAS A PROBLEMATIC AGE GAP AND MUST BE ENDED AT ALL COSTS,” said one Tiktoker in a video where she points to the different words as they appear on screen.

Well we’re excited to see how this relationship develops! Will Pete mention his new hottie on a Weekend Update segment? Is there another engagement in the works for these two? Does Pe—oh! Nevermind, we are just now getting word that Pete Davidson and the T-Shaped Tetromino from Tetris have BROKEN UP following a particularly steamy photo of Pete holding hands with, yes that’s right, AMY ROSE FROM SONIC ADVENTURE BATTLE 2!