AOC Grafts Gun Onto Arm, Demands You Hear the Planet’s Cries of Pain 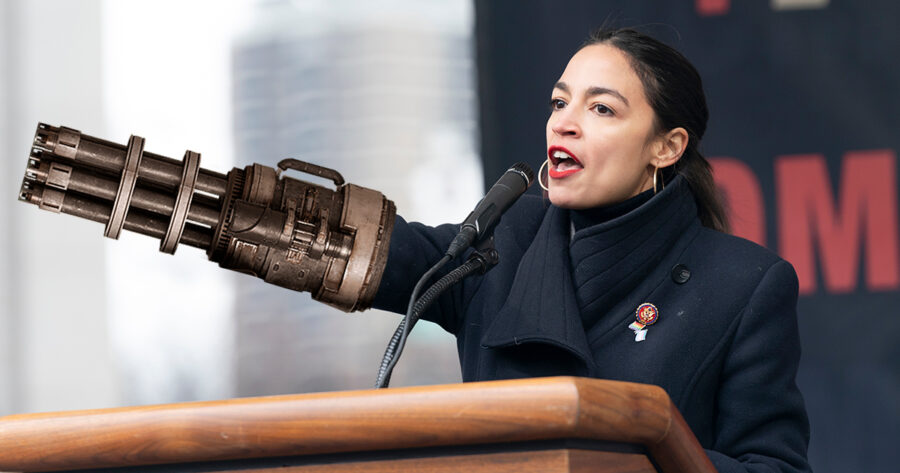 NEW YORK, N.Y. — Gesturing wildly with the large machine gun that had been recently surgically grafted onto her right arm, U.S. Representative Alexandria Ocasio-Cortez urged her colleagues and constituents to hear the planet’s cries of pain in a prepared statement last week, sources say.

“Companies like Murray Coal and Chevron are bleeding the Earth dry,” said Cortez while addressing other members of Congress moments after shooting hundreds of bullet holes in the wall behind her to get their attention. “The Green New Deal is the first step to protecting the planet’s dwindling lifeblood. That lifeblood is in your veins, too! Can you feel it? The planet feeds off of all of our energy, and these companies need to pay for what they’ve done!”

Sources say that Cortez’s speech went uninterrupted even as she went over the balance of time granted to her by Speaker of the House Nancy Pelosi, partly due to the intimidating appearance of the enormous gatling gun arm.

“What were we supposed to do, interrupt her?” said House Minority Leader Kevin McCarthy during a midday recess. “She’s got a gun for an arm, are you insane? I spoke up once and she blew a hole in the ceiling. No thank you.”

While her sudden change in appearance and attitude shocked many of her constituents and political rivals, the effectiveness of Cortez’s new strategy cannot be understated.

“The planet bleeds green like you and I bleed red,” shouted Cortez at her fellow members of Congress regarding the planet’s deteriorating natural resources. “The hell you think is gonna happen when it’s all gone, huh? Answer me! You gonna stand there and pretend you can’t hear the planet crying out in pain? I know you can!”